Mod
Alchemy Ever After by Raine & Siôn O'Tierney

When a warm touch awakens the consciousness within a living ice sculpture, Idrian learns about physicality and the magic of passion. 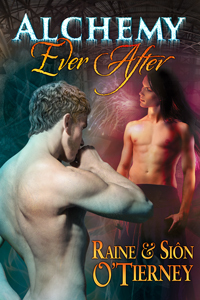 The city of New Alexandria is filled with powerful magicians-in-training and mechanical follies, the world’s largest library, and marvels beyond compare. The allure of this modern metropolis draws young people from all over the world, but Idrian has come instead for the opportunity to learn the new art of alchemy.

He’s been taken as an apprentice by Maketh, a scholar experimenting with new ways to combine technology and the ancient mystic arts. Together they’ve animated a living ice sculpture. Idrian cannot wait to unveil the sculpture alongside the other wonders at the annual Spring Festival.

After witnessing his master in a passionate embrace with another student, Idrian’s mind drifts to things beyond alchemy. And when a warm touch accidentally awakens the consciousness within the living sculpture, Idrian learns firsthand about physicality and the magic of passion.

Siôn O'Tierney and I are going to be chattin' it up over at the Dreamspinner Press Facebook page tomorrow from 11 a.m. to 1 p.m. CST! Here's the event link:

There will be prizes and fun, friendly conversation about Alchemy Ever After for anyone who is interested! We hope you can stop by :)