Mod
Please let us know what you are reading and if you are enjoying it. I plan to start Tortilla Flat as soon as possible.

Based on the criteria of digitally available through Overdrive, and a Steinbeck book that was currently available (snowmageddon, you know), I picked "Travels With Charley," a memoir about his travels in a camper truck around America in 1960, and so far I'm loving it! What a dry sense of humor. I think I would have liked John Steinbeck in person.

I'll be reading Of Mice and Men, which I taught for years but haven't revisited since retirement. The story of Lennie and George has always touched my heart.

Writers Almanac had this information on Feb. 6:

"It was on this day in 1937 that John Steinbeck's novella Of Mice and Men was published. The book was Steinbeck's fifth novel (he had also published an excerpt from a novel and a book of short stories)....

He began work on Of Mice and Men in 1935. He and his wife, Carol, were living in his family's three-room vacation cottage near Monterey Bay. It wasn't meant for year-round living, but Steinbeck built a fireplace and closed off the porch, and they made do. Carol worked as a secretary, and Steinbeck's parents gave him an allowance of $25 a month. Steinbeck's new book was titled Something That Happened, but then he read the poem "To a Mouse" by Robert Burns, and was struck by the lines: "The best laid schemes o' mice and men / gang aft agley, / An' lea'e us nought but grief an' pain, / For promis'd joy!" So he retitled his work Of Mice and Men. Steinbeck wanted to write in a new style, more like a play than a novel. He considered his audience for the story to be poor working-class people, and he thought they would be more likely to see a play than read a book.

Steinbeck had worked in California as a farm laborer, and he wanted to write about the terrible conditions he witnessed. Of Mice and Men tells the story of two laborers who are best friends: Lennie, who is big and strong with limited mental capabilities, and George, who is small and smart and looks out for Lennie. The story ends tragically after Lennie, unaware of his own strength, kills a woman. Steinbeck based the character of Lennie on a real farm laborer he knew, who killed a ranch foreman with a pitchfork after one of his friends was fired. Steinbeck made sure that the novel was tightly plotted and heavy on dialogue, ready to be adapted to the stage.

Then his new puppy, Toby, chewed up half of the manuscript. Steinbeck was furious, but a couple of days later, he was able to write to a friend: "Minor tragedy stalked. My setter pup, left alone one night, made confetti of about half of my ms. book. Two months work to do over again. It sets me back. There was no other draft."

He was forced to start over, but work went quickly again, and he managed to get the work to his publisher a few months later. When Of Mice and Men was published, it had already been chosen by the Book-of-the-Month Club, and got great reviews. The famous playwright and director George S. Kaufman offered to produce it as a play, and Steinbeck spent a week at Kaufman's Pennsylvania estate, where the two men worked on adapting the work for the stage. About 85 percent of the novel's original dialogue ended up in the final play. After his week with Kaufman, Steinbeck left the East Coast. When a reporter asked him if he would stick around, he replied: "Hell no. I've got work to do out in California." He refused to come back either for rehearsals or to see the final product. He did ask his publisher to call and give him a full report on the play's opening night, but he had to go to a friend's house to use the telephone since he didn't have one of his own. The play was a huge hit."

My favorite film version is the 1981 movie with Robert Blake as George and Randy Quaid as Lennie. 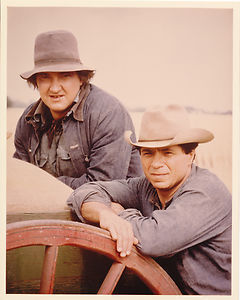 Mod
I finished "The Winter of Our Discontent" and gave it 5 stars.

It is an experience to read an author that can put into words an observation that you have made yourself but could never describe. This story, the last that Steinbeck completed, is a continuation of his analysis of man. But here it is 1961 and Steinbeck uses his years of observations and the understanding that he has gained to tell a tale that many have tried to tell. He tells his readers even before the story begins that if they are "seeking to identify the fictional people and places here described, would do better to inspect their own communities and search their own hearts, for this book is about a large part of America today." And forever. Which is why Steinbeck appeals to all ages and levels of sophistication.

Ethan is too practical to put any belief in fortune tellers and too honest to take a bribe. And when a series of small, everyday events mount up to a climax you pray that Steinbeck will not disappoint. Ethan ponders why men get "knocked down". Men can fight back against big things he tells his banker. "What kills them is erosion; they get nudged into failure. They get slowly scared. I'm scared. Long Island Lighting Co. might turn off the lights. My wife needs clothes. My children-shoes and fun. And suppose they can't get an education?.....Course you don't understand. It's slow. It rots out your guts. ...I hate my job and I'm scared I'll lose it. How could you understand that?" Sound familiar? Steinbeck has written about it many times.

Steinbeck knows people and seeminly, himself. Ethan ponders, "It is not what you do, but how you do it and what you call it. Is there a check in men, deep in them, that stops or punishes? There doesn't seem to be. The only punishment is for failure. In effect no crime is committed unless a criminal is caught. In the move designed for New Baytown some men had to get hurt, some even destroyed, but this in no way deterred the movement."

There are so many references to War which both Ethan and Steinbeck (as a correspondent) experienced. This example was so relevant that I wondered how long Steinbeck had concidered it. "....It would be too easy to agree that I did it for my family because I knew that in their comfort and security I would find my dignity. But my objective was limited and, once achieved, I could take back my habit of conduct. I knew I could. War did not make a killer of me, although for a time I killed men. Sending out patrols, knowing some of the men would die...I could never excuse or condone it. The main thing was to know the limited objective for what it was, and, once it was achieved, to stop the process in its tracks...."

Mod
I got swept away with celebrating my birthday yesterday and completely forgot the book discussion. I was so looking forward to discussing Steinbeck. I finished Cannery Row as well as the Winter of our Discontent for this occasion. The number of sticky notes that I now have to remove from these books are an indication of how much I loved about them. So sorry to have missed the discussion.

Mod
I want to read everything Steinbeck ever wrote! His ability to describe man with all this faults and goodness make the reader appreciate a character that in reality they might not ever really want to know. Many times, I found myself picturing the scene Steinbeck describes and laughing out loud. But also finishing a chapter and needing to reflect a bit. You can read the story over again and again getting new meaning each time.

"Doc would listen to any kind of nonsense and change it for you to a kind of wisdom. His mind had no horizon - and his sympathy had no warp. He could talk to children, telling them very profound things so that they understood. He lived in a world of wonder, of excitement. ....Everyone who knew him was indebted to him. And everone who thought of him thought next, 'I really must do something nice for Doc.' "

"Mack and the boys are the Beauties, the Virtues, the Graces. ....What can it profit a man to gain the whole world and to come to his property with a gastric ulcer, a blown prostrate, and bifocals? Mack and the boys avoid the trap, walk arond the poison, step over the noose while a generation of trapped, poisoned, and trussed-up men scream at them and call them no-goods, come-to-bad-ends,.... Our Father who art in nature, who has given the gift of survival to the coyote, the common brown rat,...must have a great and overwhelming love for no-goods and blots-on-the-town and bums, and Mack and the boys"

Mod
Here is my very brief review of Tortilla Flat:
I really love Steinbeck's writing style. I enjoy how he tells the story of the paisano's without passing any judgement on the way they live. The story was interesting but I had a hard time caring too much about any of the characters. I only found one character, the Pirate, likable and that was mostly due to his wonderful relationship with his dogs and his dedication to keep a promise he made.

Mod
Patty wrote: "I got swept away with celebrating my birthday yesterday and completely forgot the book discussion. I was so looking forward to discussing Steinbeck. I finished Cannery Row as well as the Winter o..."

HAPPY BIRTHDAY PATTY! We missed you but I am glad to hear you were having a good time.

Of Mice and Men (other topics)