The Perks Of Being A Book Addict discussion

PC Zick﻿ is a storyteller. She writes contemporary fiction, romance, and nonfiction. I love her work, because in n everything she does, she seeks a challenge, which is exactly the reason why both of us are taking part in the boxed set, At Odds with Destiny (to be released 03/03/2015.) Her exceptional novel, Native Lands, will be included in it. It is about murder, sex and deceptions that threaten the existence of a tribe of Native Americans and their beloved everglade.

I am truly honored that she asked me to come for an interview. Her first question to me was, What knowledge have you acquired recently that might assist other writers?

Here's a short snippet from "Tempus," part of my contribution to "At Odds with Destiny. If ever there were two star-crossed lovers, Tempus and Cime fit the bill...

She had come to him, had Cime. She was what she was, what she had always been.
It was Tempus who was changed: Vashanka had entered into him, the storm god who was Lord of Weapons who was Lord of Rape who was Lord of War who was Lord of Death’s Gate.
He could not take her, gently. So spoke not his physical impotence, as he might have expected, but the cold wash of wisdom: He would not despoil her; Vashanka would accept no less.
She knocked and entered and said, “Let me see them,” so sure he would have the stolen diamonds that her fingers were already busy on the lacings of her Ilsig leathers.
He held up a hide-wrapped bundle, slimmer than her wrist, shorter than her forearm. “Here. How were they thieved?”
“Your voice is hoarser than I have ever heard it,” she replied, and: “I needed money. There was this man… actually, there were a few; but there was a tough, a street-brawler. I should have known – he is half my apparent age. What would such as he want with a middle-aged whore? And he agreed to pay the price I asked, without quibbling. Then he robbed me.” She looked around, her eyes, as he remembered them, clear windows to her thoughts: She was appalled.
“The low estate into which I have sunk?”
She knew what he meant. Her nostrils shivered, taking in the musty reek of the soiled bedding on which he sprawled fully clothed, smelling easily as foul. “The devolution of us both. That I would be here, under these circumstances, is surely as pathetic as you.”
“Thanks. I needed that. Don’t.”
“I thought you wanted me.” She ceased unlacing and looked at him, her tunic open to her waist.
“I did. I don’t."

Janet wrote: "Here's a short snippet from "Tempus," part of my contribution to "At Odds with Destiny. If ever there were two star-crossed lovers, Tempus and Cime fit the bill...

James DiBenedetto, the author of the Dream Series, is my 'partner in crime' in the creation of the boxed set titled At Odds with Destiny. He asked me about the ideas that propelled me to bring together the ten authors who are taking part in this exciting project. So I opened with, "Lately, despite being an intensely private person, I have found myself increasingly engaged with readers and listeners. Why? because of my characters. Having sprung from my mind onto the page, they might die there, pressed between the front and back covers–unless I make it possible for them to spring from the page to your mind..."

To read more click here:
At Odds with Destiny

She wore her hair in the usual thick ponytail. I sat contentedly across from her, thinking how absolutely lovely she looked in her red wool shirt. The feelings that I felt for Camille continued to be far deeper than friendship, and for the thousandth time, I reined in my desires and tried to smother them with small talk about gardens and springtime.

To read more click here:
In the spirit of spring: she talked about her plans for a spring garden 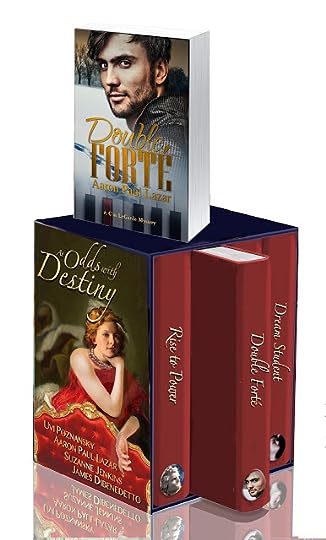 After that, nobody says anything for a couple of minutes, until the sound of a car rumbling up the driveway breaks the silence. Headlights shine in the window. Then the car goes quiet and the lights go out, and a moment later the doorbell rings. Dad opens the door, and Brian’s there, flowers in hand.

To read more from James DiBenedetto​'s novel click here:
In the spirit of spring: Brian’s there, flowers in hand 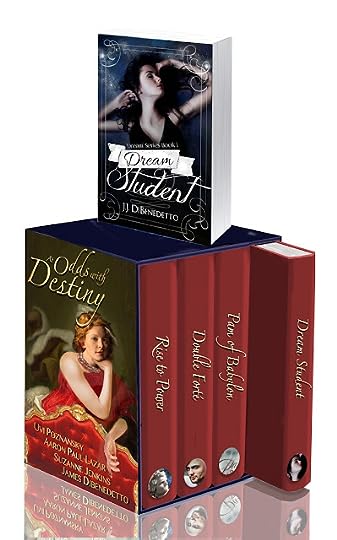 Tadah! Here is a new cover for At Odds with Destiny, a boxed set of four novels by three wonderful writers and me. Had a blast designing this cover, because of this regal red, that appears in folds of the dress and in the headboard, and because of this 'in your face' direct look in the eyes of this striking girl. She makes me think, is she destiny and you are at odds with her, or is she facing destiny and rebels against her own fate--

To read more click here:
Cover reveal for At Odds with Destiny 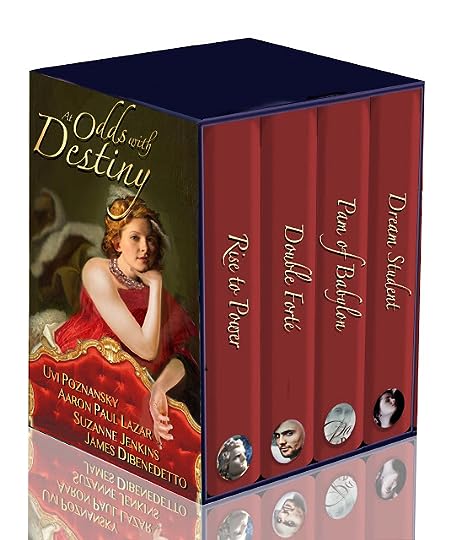 Inspired by the first day of spring, which is just around the corner, I want to give you a taste of a first day for one of the characters in our boxed set: “This is a special day, our first day together! I won’t cook like this once I’m in the apartment.” Was she reading minds now? “Do you have anything that needs doing today--” 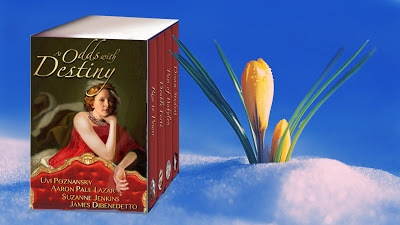 Ready for #Easter? Here are four amazing novels, written by Aaron Paul Lazar, Suzanne Zannis Jenkins, James DiBenedetto and me, in one boxed set. Open it at your own risk: 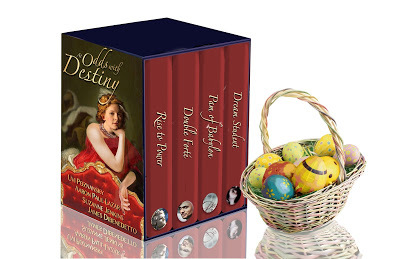 To read more click here:
April Fool: In a minute I'll be gone 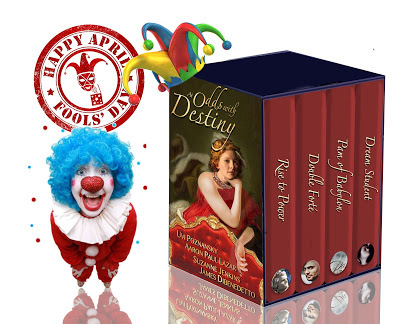 Kick off your flip-flops and take my hand
Sink your tows in the warm sand
In each shell, a story hides
A secret whispers under crash of tides--

To read more click here:
A please where sirens call your name 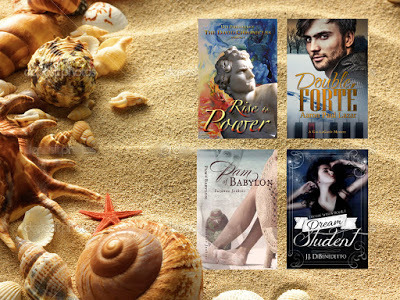 Elsbeth filled my dreams in the pre-dawn hours. It was summer: sun-bleached, blazing summer. We lay on a lavender blanket, deep in a field of wildflowers. Thousands of blue lupines nodded their heads in unison in a meadow of ubiquitous buttercups--

To read more from Aaron Paul Lazar's pen, click here:
Beach reading: We lay on a lavender blanket, deep in a field of wildflowers 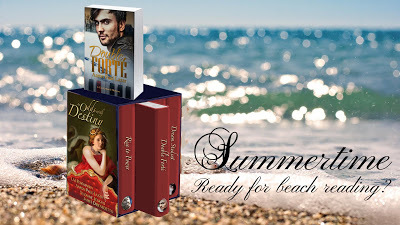 At the other side of the valley, the sun has just begun to rise. At first, its blood-tinged rays shoot straight into my eyes, blinding me. They make me blink, so it takes me time to adjust, to notice how, out of the shimmering air out there, the rays are starting to carve out three distinct silhouettes-- 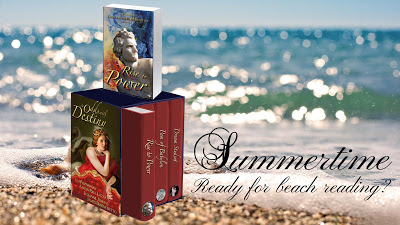 Walking straight towards his bed, which, Sara notices for the first time, is not empty. Someone’s hidden under the covers. For one guilty moment Sara, the memory of her crush still in her mind, hopes that when Mark pulls the covers up, it’ll be Sara under there, Sara that he’s dreaming about…

To read more from James DiBenedetto's pen, click here:
Beach reading: Sara looks around, wondering whose dream this is 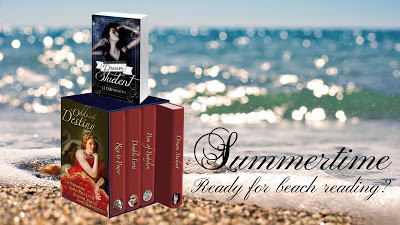 Looking for a great gift? Why not something you can enjoy together?

Each one of the novels in this boxed set anthology is outside the box. Open it at your own risk!

Bestselling, critically acclaimed, and notoriously creative authors from across the book continuum join forces to bring you At Odds with Destiny, everything you've wanted in a boxed set but thought you'd never find: full-length, award winning novels brimming with cozy mystery, suspense, romance, and biographical historical fiction. Finding themselves at odds with destiny, the characters in these stories fight to shape their future and define who they are. Come follow them in their amazing journeys.

Rise to Power by Uvi Poznansky
Notorious for his contradictions, David is seen by others as a gifted court entertainer or a traitor leading a gang of felons. How does he see himself? Can he control his destiny and strike a balance between ambition and longing for purity?

Double Forté by Aaron Paul Lazar
In the deep cold of winter, threats erupt from the dark woods, spinning events out of hand—and Gus, tormented by the unexplained death of his wife, braces for the fight of his life.

Pam of Babylon by Suzanne Jenkins
After Jack dies, his wife Pam discovers secrets and lies. Is she destined to succumb to vengefulness against his two lovers, or will she find a different way forward?

Dream Student by James DiBenedetto
Everything was going according to plan, until the night when college junior Sara Barnes started seeing other people’s dreams. Is she the only one witnessing the secrets of a serial killer?

Let in the dog and let out the cat, for this boxed set holds dangers of the most rarefied kind! 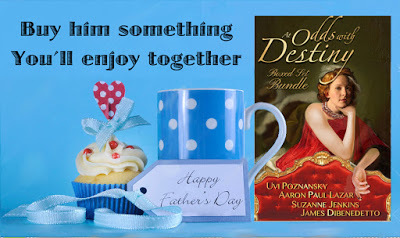 >At Odds with Destiny

Marie closed the door and locked it. She crept back to the bed and got her cell phone, keying in 9-1-1... The dispatcher said they would send cars out right away. She hung up and went back to her door. She could hear Pam’s voice, low and pleading, and her mother whimpering. She didn’t know if she should go out to help them or stay locked in her room. What would make things better? Worse? She chose staying put. In less than five minutes, she heard the whoosh of cars out front and then a loud “Bang!”

To read more from Suzanne Jenkins pen, click here:
Start the summer with a bang: At Odds with Destiny 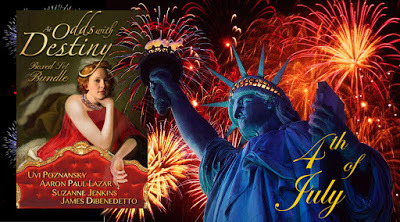 The Perks Of Being A Book Addict