Mod
Our newest title is by an important figure in the development of 20th century American horror, Arch Oboler (1907-1987). Who? If you've never heard of him, it's because most of his work was in the now-vanished medium of the radio drama: his program LIGHTS OUT terrified millions of listeners each week during the 1930s and '40s. But he also wrote one novel, HOUSE ON FIRE (1969), a chilling study of evil that earned comparisons to Rosemary's Baby. This new edition features an intro by Christopher Conlon and a brilliant cover design by Lorenzo Princi. 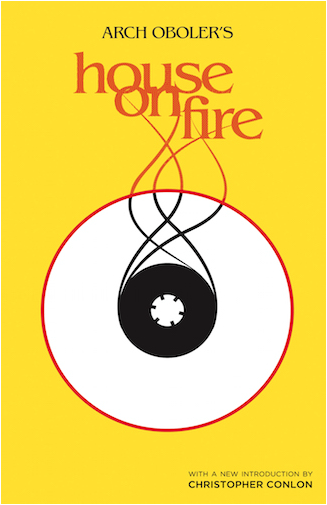 House on Fire (1969) by Arch Oboler, introduction by Christopher Conlon

It starts out innocently enough, when reporters Tony Dumont and Robin Shepherd are sent to interview teenager Mark Elias, a scientific genius, about a scholarship he has won. But it is quickly clear that there is something very strange about the Elias family. Mark and his sister Shirley spend long hours behind closed doors conducting weird and inscrutable experiments involving electricity and a tape recorder. And then there is old Mrs. Elias, the children’s grandmother, who died recently and whom the family seems terrified to discuss. The two journalists believe there may be a more serious news story than the one they were sent to cover, but they have no idea how serious—until people begin to die . . .

Arch Oboler (1907-1987) was a major figure in the Golden Age of Radio whose weekly horror program Lights Out terrified listeners in the 1930s and ’40s. In House on Fire (1969), his only novel, Oboler delivers a page-turning chiller that is effective both as an eerie tale of supernatural horror and as an examination of the nature of evil.

Mod
I ran across this book by complete accident over two years ago. I spent over a year trying to track down the estate to see it republished. That's how much I enjoyed it. :)

Valancourt Books wrote: "I ran across this book by complete accident over two years ago. I spent over a year trying to track down the estate to see it republished. That's how much I enjoyed it. :)"

I just bought it. I have no idea how you keep finding all of these novels, but hey -- don't stop whatever it is you're doing!

House on Fire was adapted for Mutual Radio Theater in 1980, narrated by Vincent Price and one of the voice stars is Virginia Gregg, the voice of Norma Bates in Psycho and Psycho II.

UK Kindle edition bought. I really must actually start reading all the books on mine. I just have so many paperbacks, and prefer reading on those.

Mod
I've been listening to his Lights Out radio dramas during my morning exercise. I'm not sure how many he wrote but the episodes he was involved with are fantastic. House on Fire reads very much like a radio play. The personality comes mostly through the dialogue, not the descriptions. Personal fav of mine.

House on Fire (other topics)