For anyone who might be interested i'm reading all of (or at least as much as i could be bothered with) the material referenced in the LOeG comics http://www.boards.ie/vbulletin/showth...

I'll try to transfer my notes or review to goodreads when i get a chance.

Is anyone else doing something similar?

Oh by the way not everything on the list is actually referenced, some things like 'House of Invisible Bondage', 'The Vampyre' etc. i thought were referenced but turned out not to be.

Also i have a couple of things i know that no-one else seems to
1) 'The Mass', fought by the Seven-Stars League is a reference to 'The Blob' from the film of the same name.
2) Its not Fu Manchu in the first league, 1898 is too early for him, although it does look like him. So its a double reference to Fu Manchu and the character he was based on 'Dr. Yen How' from 'the Yellow Danger' which was published in exactly 1898.

Just finished an illustrated version of the Adventures of Captain Hatteras which gets a nod in the New Travelers Almanac (view spoiler)[“...the stark volcanic rock known as Queen Island, as discovered by the most unfortunate Captain John Hatteras in 1861.” (hide spoiler)] and noticed this, which is very similar to the version of the Blazing World as presented in LoEG. 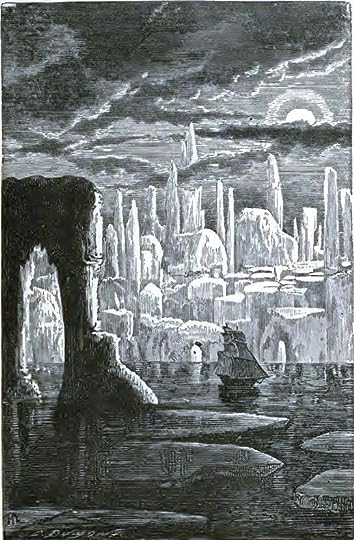 "See there, Johnson; see that singular collection of blocks of ice! Would one not say it was a foreign city, an Eastern city, with minarets and mosques in the moonlight?"
...
"Everything can be found there; but those cities or churches are very dangerous, and we must not go too near them. "