plot to be decided

Yeah fantasy sounds fun :) I have to go to bed though :/ sorry! it's late.

What do you mean by high and low?

Same >.< I think I can hash out a female if I really try.

xP Alright! Sounds good to me >.< Thanks

most definitely :) YOure going to hate me but I gtg to bed again

*Is jealous of your character* 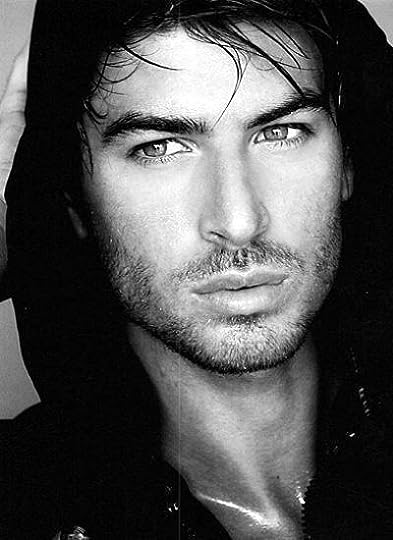 History: Daemon is the son of a successful weapons trader from a neighboring kingdom. He did the heavy work whilst his father sold his wares, chopping wood, fixing damaged weapons, etc. He never had time to go to school or learn, and doesn't know how to read anything but his own name, even though his father was educated, he was not given the same privileges because of his busy lifestyle. He has been betrothed to a merchant's daughter from a neighboring kingdom since he was four, and since she is of age now, they are to meet and be married all in a weeks' time

:D Let's have four because even. North south east and west. West is desert kingdom, north mountainous, east is coastal and mild weathered, and south is kind of a plains biome?

Alright! Are we ready to go? We could start like 2 days before the wedding?

Who wants to start?

Daemon was not one for travel, as contrary as it was to his father's business. He hated having to uproot his life, break off friendships, and move on again after a month or less. He'd hated it at first, doing everything in his power to avoid doing so, but after a few years, he relented, and sat still whilst his father taught him about how to spot value, how to haggle, to work. It was at that age of five that his parents decided to betroth him to one of his father's old friends, an equally successful, if not rough around the edges man. The man's own daughter had been only a few months' old at the time, and it had appalled the young merchant's son to say the least.

Once he was begrudgingly sucked into his father's life, giving up, he flourished. He quickly learned how to put on a facade, to woo women and clients alike. He was soon known everywhere on their normal route as the huge tease, and, in some towns, women flocked to their caravan as soon as they arrived, professing their love or bursting into tears at how Daemon had just abandoned them. He never listened. Instead, he set up their little travel smithy, and worked on repairing weapons, fixing old ones and selling them like new, smiling at young maidens who walked by. Life was good.

It was on Daemon's 22nd birthday when his father announced that his betrothed was of age by her father's standard to be married off. According to his father, she had finished her studies, and was deemed 'fit to wife any king, but your ruffian of a son would do'. It was a joke, but it didn't put Daemon in any better of a mood. He may have given up escaping that life, but he hadn't given up on getting his freedom back. Damnit, he would marry whatever women he chose!

It was three days before the wedding, and Daemon sat, sulking, dressed up and annoyed as ever to be thrust into this whole marriage thing. Her and her family were to arrive any minute, and he was scolded by his mother to smile when they did, at least act like he wanted her to be happy.

((Li love long posts :) though I often struggle to match))

Daemon worked to tidy up the house, sighing softly. The plan was that when him and this mystery girl were married, they would inherit the business, and move to a nice large cottage in a larger city a few miles away. His father had the building built just for this occasion. A wedding present, if you will. Then his father and mother would retire, and enjoy life for once, without the drama of traveling and selling. Daemon, however, had no intention of continuing. Their fortune was large enough for him to open a smithy, and let them live comfortably without moving.

That is, if he didn't strangle this woman first. He had to be fair of course, she could be very nice, but until he knew for sure, he had to keep himself in check, not be too hopeful. This wedding could either be the start of something horrid, or amazing.

It was starting to get a little late in the day, and they still hadn't shown up. Daemon had been in his itchy suit for far too long, and he considered burning it, but sighed, deciding against it. He instead changed out, wearing a comfy pair of breeches and no shirt, donning his leather apron and going into the forge, locking the door so he could have some time alone with his craft. It helped him calm, the heat on his face, the repetition of the hammer striking, the ability to fix things, to make something out of a lump of nothing.

He got to work on something special, a crappy dagger he'd picked up from the flea market. It would be a gift to his betrothed, but he wasn't nearly done with it. He'd reinforced the metal, sharpening it to a lethal point and polishing the blade. He'd wrapped the handle in thin chain, gilding it with common gemstones, and inscribing her name on the blade. He still had to carve the detail work into the metal of the blade itself, but that took lots of time, the one thing which he was running out of.

He knew it was a crappy gift to give a scholarly woman such as herself, but it was all he knew how to do well. Might as well show her what he can do, and give her a gift forged out of his own hard work.

Daemon was startled out of his nearly completed work to his mother yelling, telling him that she could see them down the road and that he better be in his bloody suit if he expects to eat any of her hard day's cooking. He scowled slightly, getting to his feet and stalking out, wiping himself off and changing back into his suit. He no longer smelled like the horrid scented bath he'd been forced to take, but smoke and sweat, much to his mother's disgust.

Daemon's father smiled and greeted his old friend at the front gate, a stablehand taking their horses and a different servant leading Daemon's betrothed inside, whilst his father spoke. "I can't tell you how glad I am to be here..And Daemon! He's been practically leaping off of the walls in excitement, you should have heard him, going on and on all week he did!" He clapped his friend on the back and lead him to his study to show him his latest finds and whatever the hell they did.

Daemon, however, was panicking. He didn't want his freedom to end. He didn't want to meet her. What if she was absolutely horrid? Wealthy young women tended to be spoiled rotten, from what he'd observed. The servant led Daisy to the door and opened it. "Master Daemon should be somewhere nearby." He smiled and promised. Indeed, Daemon was at the ready, perking up when she entered, trying to force a smile on his face. He managed to do so, but it didn't reach his eyes as he held out a hand for her to take. "Daemon Tenebris, M'lady." He murmured, just as he'd been taught to say.