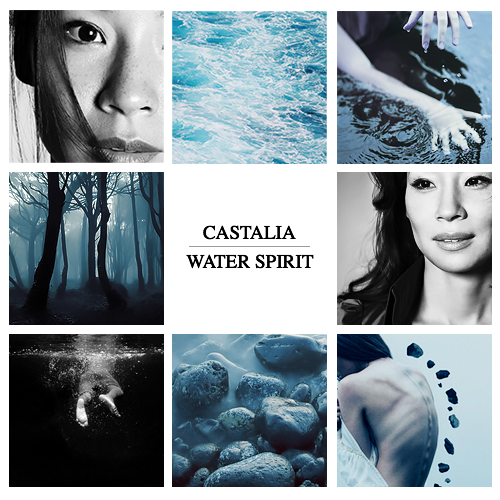 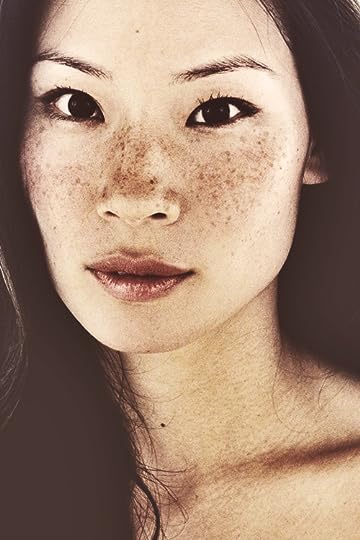 Fᴜʟʟ Pʜʏsɪᴄᴀʟ Dᴇsᴄʀɪᴘᴛɪᴏɴ:
Castalia's eyes have a perpetual cold, haunting look engraved into her blackened pupils, with black hair and a personality to match. She is muscular and short, with slightly webbed hands and feet for better swimming. On her neck are small gill-like features that allow her for advanced breathing, and she is usually found dripping in water and mud from all her daily water-related activities.

Bʟᴏᴏᴅ Tʏᴘᴇ: Type O - Meaning: Type O blood types are usually ambitious, hardworking, and highly instinctive, but can find themselves to be selfish, frigid, and unrelenting.

Rᴇʟɪɢɪᴏɴ: Pagan (Specifically Druidism, in which the religion involves around the respect for nature) 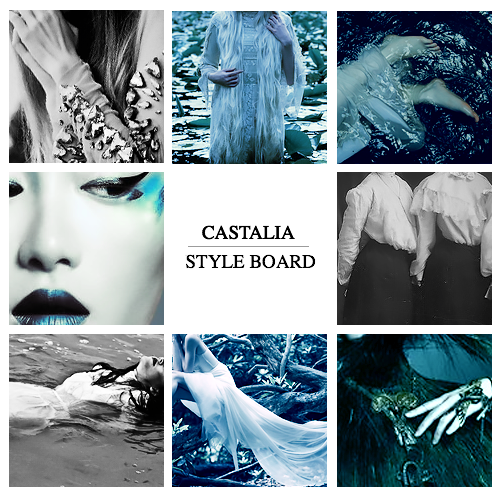 Castalia typically can be found donning white, ethereal clothes reminiscent of common human style of the 1800s, but with a sharp twist in makeup and hair that is more fantasy-like. She often uses berries and fish blood to paint shapes across her eyes and darken her lips, and wears water-turned silky fabric across her shoulders like a cape or cloak when wandering out of water.

Pᴇʀsᴏɴᴀʟɪᴛʏ [Description]:
Dark and mysterious, Castalia is often not one to share her secrets. She is a highly strong-willed, ambitious person with a great lack of empathy for others. Although sensitive and emotional on the inside, she hides this through brute force and a solemn attitude, but always appears kind and compassionate (although false).
When confronted or challenged, Castalia never fails to win; hating even the thought of losing a battle, whether mental or physical. She finds the more successful she is, the more she can finally find solace in a world that she never truly felt welcome in, thus causing her to put her best foot forward in everything she does. Castalia is also never one to take the easy way out in challenges, and frequently manipulates her way through life. Never letting her guard down, Castalia is a hard working, determined woman with a drive to succeed, and while intolerant, stubborn, and quite often domineering, she has an innate ability to inspire, lead, and conquer without mercy.


Hɪsᴛᴏʀʏ:
Born to a human and a naiad, Castalia has always struggled with her identity as a water spirit. As a young girl, her mother abandoned her with her father, who also wanted nothing to do with the poor child. The father, heartbroken that his lover vanished, jumped into the stream in the Enchanted Forest with Castalia in his arms, attempting to kill him and his young babe. Although her father died, the Pegaeae water spirits sensed one of their own kind had survived the fall and raised her as their own, although she lacked their longer life spans due to her half human ancestry.
Later on, Castalia experienced great alienation by the other naiads and sought to ameliorate her situation by being successful in order to make up for her lack of full naiad blood. This drive for attention and validation caused her to grow into a great leader even in her teenage years among the few Pegaeae in her spring. After gaining a great following among them in her early adulthood and late teens, she moved on to other water lands and established relations with them, ultimately linking all the Naiad "tribes" together(?), and, while they are not united completely, she has become so notorious for essentially conquering and making a name for the Water Spirits that most of the other creatures in the forest have recognized her as the Chief of her kind.

Complete. If there's any errors or if an idea isn't canon to the plot line, please let me know and I'd be happy to fix it!

Mod
Can I have a little more for history and personality please and the musical empathy thing is fine.

Sure thing, I'll fix it later today when I get the time.

⋆Willow⋆ wrote: "Sure thing, I'll fix it later today when I get the time."

I edited the post, but if it's still not enough I can go back and add more. I wasn't sure how much you were looking for, but I tried my best!