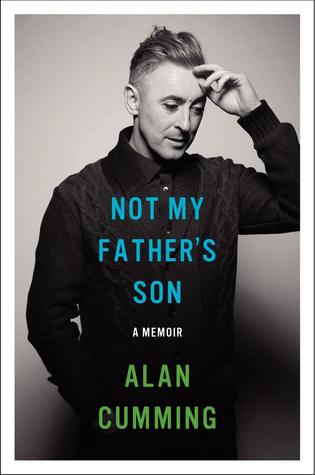 Book Synopsis:
In his unique and engaging voice, the acclaimed actor of stage and screen shares the emotional story of his complicated relationship with his father and the deeply buried family secrets that shaped his life and career

When television producers in the UK approached him to appear on a popular celebrity genealogy show in 2010, Alan enthusiastically agreed. He hoped the show would solve a family mystery involving his maternal grandfather, a celebrated WWII hero who disappeared in the Far East. But as the truth of his family ancestors revealed itself, Alan learned far more than he bargained for about himself, his past, and his own father.

With ribald humor, wit, and incredible insight, Alan seamlessly moves back and forth in time, integrating stories from his childhood in Scotland and his experiences today as a film, television, and theater star. At times suspenseful, deeply moving, and wickedly funny, Not My Father’s Son will make readers laugh even as it breaks their hearts.

I started it this morning on audio. I love the sound of his voice.

I'm on disc 2. He did not have a happy childhood.

I also love his voice, I'm going to have to look into his narrations of fiction.

He's always been an intriguing actor and personality for me, not how I expected his life so far.

I have the book. I will read this as well. He is a yummy Scottish guy, his voice is awesome.

I have the audio on hold on my Overdrive. Maybe I can join later on down the road, if I can squeeze it in.

I'm discovering that I can listen to him all day as well! I bought Macbeth, loved the sample with him :)

I'm discovering that I can listen to him all day as well! I b..."

Ooh, yes. I would love that. I think I have 2 Audible credits to use. I don't listen to a lot of audiobooks. I'm picky about it. More than once I've hated the audio but enjoyed reading the book myself.

I'm reading it, then once I get the audio book from my library I will listen to it. :)

I'm discovering that I can listen to him all day as well! I b..."


Oh my goodness I listened to the sample of Macbeth, thank you for sharing that because that is on my to get list. OH MY, Alan, yum yum. I could listen to his voice all day.

I think his intro is my favorite part of Masterpiece Mystery.

He is in Dracula. That was Octobers free Audible download. It was both Alan and Tim Curry, it was really good.

RachelvlehcaR wrote: "He is in Dracula. That was Octobers free Audible download. It was both Alan and Tim Curry, it was really good."

Is there a free download every month? I didn't know that. I'm just trying out a free 3 month membership. It ends 2/22.

Yes, every month. This month is Great Expectations by Charles Dickens.

Last month was The Time Machine, it's always a classic book. But it has great narration. Always.

Go to this link Whispersync for Voice Deals

Every month they will have a free book listed.

I didn't realize anyone had finally joined this. I don't know if I'll be able to get back to this soon. I'm a little overwhelmed with schoolwork right now.