Mod
Located on the first floor, the dining room is a large, open space with one long table where the royal family eats their meals. For the Selection, 2 large tables were put on either side of the original to form a U-shape. While in use, the dining room has guards lining the walls in case of an emergency. 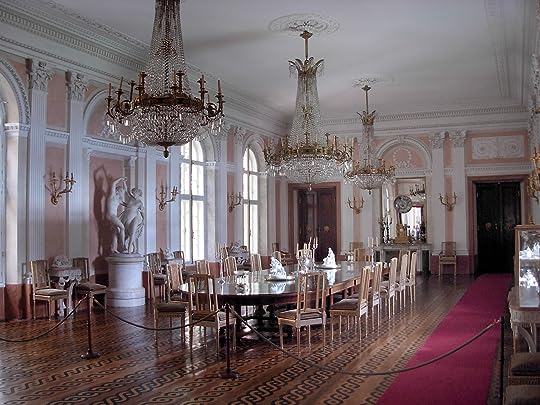 reply | flag
message 3: by [deleted user] (new)
Feb 27, 2015 05:37AM
Maeve stormed into the dining hall for breakfast. No, she was not ready for 35 little girls to run around in the palace. She would rather just send that pesky little prince off the some other place where he could simply marry a princess. But no, in a few weeks, he would have his little Selection. Maybe there would be a girl like her. Then, probably, the prince would find it out and eliminate her. Ugh. Just get this over with. Hiring rebels to kill 34 of them would be easier.

Will came into the dining room, smiling happily. It was just a few weeks until his Selection would begin. Sure, it was scary, but Will just didn't feel like it was real yet. Right now, his future wife was just at home, probably eating breakfast too, maybe heading off to work. What if she was unhappy? What if she was sick? What if she was tired? Oh god, now he was worrying about a girl he didn't even know. All Will needed to do was relax. 35 girls were coming to the palace, no matter what he did.

Upon entering the dining room, Will laid his eyes upon his foul mother. Why was she always everywhere? Eating breakfast with her might just ruin his whole day-scratch that, his whole week. With gritted teeth, Will smiled. "Hello, Mother."

reply | flag
message 5: by [deleted user] (new)
Feb 28, 2015 08:13AM
Maeve turned her annoyed glare into a false smile, "Hello child." He was awfully annoying. Always peppy and smiling, and he looked excited for his Selection. Goody, Maeve might accidentally kill one of the annoying Selected. Oopsie! She sat down, not really wanting to eat and went back to a scowl. She was in the mood to ruin Prince Sunshine's rainbow day. He deserved it. Hopefully nobody else would walk in,

reply | flag
message 6: by [deleted user] (new)
Feb 28, 2015 09:27AM
Maeve put on another false smile for Juliette. Another peppy girl. All of her children were peppy. No, scratch that. Morrigan wasn't. She was probably the most like Maeve. Cecil wasn't either. He was... weird. All of her other children were peppy though. She had never been close to any of her children and just let them do their own thing - away from her. Most of them tried to stay away from her. Accept for Juliet. She always smiled and still loved her. Ugh.

Will glanced over at his youngest sister, Juliette. She was his favorite sister, by far. Morrigan was just plain rude, and Astrid was too quiet. "Hey, Jules," Will acknowledged. Giving another fake smile, he said, "Mother, how did you sleep?" in an oh-so-sincere voice.

Mod
Astrid, slightly tense after her fight with Morrigan, entered the grand dining room. She wasn't really hungry, but it might be nice to have something small. "Mother," Astrid said, nodding politely.

Morrigan walked in. "Mother! I need you!" She sat down on the seat left of Maeve, ignoring Will, Juliet, and everyone else in the dining room.

"Yes? What is it?" Maeve asked her blandly. Morrigan was the most like her, and they got along the most, so she didn't mind too much talking to her from time to time.

"I need to tell you something," Morrigan said, and immediately started to talk. "This maid - her name is May - was being so annoying. And then she said something extremely rude. 'You could've been that baby girl raised in a 'shack' as you say. Or a maid being beat for not doing a good enough job.' Ugh! I can't believe that brat told that to me! I charged her for a public beating tonight. Do you approve, Mother?

Maeve actually was kind of shocked. Nobody would say that to a royal figure because the consequences were huge, "Yes, I approve. We shall have it in the Great Room tonight."

"Promise it won't be canceled?" Morrigan asked. She had to make sure that nothing would happen. "Not by father, my sisters, my brothers, or anyone else?"

"Yes, I do. It won't be canceled." Maeve replied. She actually did something nice - no, that's only nice for one person. It's horrific for everyone else.

"Good. Thanks Mother!" She said with a smile, and started to eat.

Mod
Astrid glared again at Morrigan and Maeve. Why did they enjoy this so much? Just...ugh. Astrid hoped her father would come in soon.

Will stared up in shock. "Wait...beating?" How could they do something like this? "Yeah, no," he protested.

Mod
Then, Astrid exploded. "Well, if that maid deserves death for being rude, why aren't you already dead?"

Mod
"Thank you, Juliette," Astrid replied. "I bet the maid didn't even realize we were royalty: she probably thought the Selection had already started or something."

reply | flag
message 15: by [deleted user] (new)
Feb 28, 2015 12:34PM
"No. I can do that with more minor things. But not if she said that I should have been in a shack and beaten. Ugh! She basically asked for her punishment!" Morrigan complained.

At that moment the king walked in. He was dressed casually that day, not in a suit yet, his blonde hair still messy from sleep. The king put on a grim smile when he saw his wife and eldest daughter, but his smile lightened towards his other children, particularly Will. As he reached them, he hadn't known what they had been talking about. Leaning down he kissed his wife on the cheek. "Good morning, dear." He greeted her, pleasant even if she was a tyrant. It was only when he was in a bad mood that he said bad things about his wife, and even then it wasn't usually to her face. Glancing up, he noticed the tension around his children. He was possibly the only one that could over-ride Maeve's decision. "Good morning. What's going on?" He asked as he sat, sipping the coffee that had been laid out for him. He wondered where Cecil was, seeing that his other children were present.

"Oh, hi Father," Morrigan said. She didn't like the king much less than her mother did. "We're talking about the extremely maid that is getting beaten tonight."

The king's expression turned to shock. He almost immediately turned it down, but he wanted to be fair to all his children. "Hmm... Well, what did your mother say to this?" He questioned, wanting to know Maeve's opinion. In his opinion, subjects only deserved public beatings if what they did was very terrible. If they hurt any of the royal family, however, that would be called for an execution. He was hoping that in his son's election, none of the girls broke the rules so that he wouldn't have to punish them. He'd had a few in his year that had... died, or been punished. Nasty affairs.

((That works. :) I just figured that you two will roleplay everything before anyone else can reply. Especially if they type a longer post, it takes more time.))

The king put on a smile to his daughter, "I understand that..." But then he put on a stern, more king-like voice. "But a public beating is bad publicity, especially this close to the Selection, and I know that she might have insulted you but that does not warrant such high punishment. Absolutely not. She'll get off with a warning, and I'll see to it that she stays away from you. If I executed or beat everyone that picked on you, Morrigan, it'd be a slaughter house, not a palace. However, like Astrid said, this won't go unnoticed. I'll pay special attention to this maid and if anything else happens, I'll reconsider."

Having no idea May was the maid that Morrigan wanted to punish. When she mentioned that 'Mother promised her', James glanced towards his wife with a tense smile. "Ah, yes well, Mother doesn't rule the entire country on Illea, she only thinks she does." He mumbled tensely under his breath. When May appeared, he was relieved for the distraction. "Ah, breakfast, wonderful." He took a plate from her with a smile, digging in with no knowledge at all about the scene about to erupt.

reply | flag
message 29: by [deleted user] (new)
Feb 28, 2015 01:49PM
Morrigan glared. It way May. Ugh. That brat. She pushed her plate away, not wanting to eat any food that she offered her. After what happened, even if it wasn't that bad, she was not going to talk or communicate with May. But it was the perfect time to get her to May to somehow hurt Morrigan.

Mod
Astrid took her food, muttering thanks to the maid who'd served her. Looking up, she noticed. It was the maid that Morrigan was mad at. This was going to be problematic.

Mod
"Nothing, nothing," Astrid replied, feigning ignorance. She took a small bite of her waffle. "You know, Morrigan, you should probably try this. It's really good."

Mod
Astrid gave a sympathetic smile to the poor maid. All she'd done is stood up for herself, and now 2 members of the royal family wanted her dead. I mean, really. It would've been a dream come true for most maids to be serving the royal family. For this girl, it'd become a nightmare.

Mod
Will sighed at his sisters. His Selection was about to start, and here they were, fighting about a maid. Why couldn't they just calm down for once?

Mod
Will smiled back at the maid. "I'm sure it will be," he said kindly. Taking a nice, large bite, he let out a small moan. "Oh my god, this is good."

reply | flag
message 39: by [deleted user] (new)
Feb 28, 2015 03:03PM
Morrigan rolled her eyes, "William, it's the exact same food as everyday." Gosh, he was probably just saying this to annoy her and Maeve and please the maid.

Mod
Will smirked at Morrigan. "Oh, sister, how little you know," he replied in a sarcastic tone. He liked to tease her, just because he was older and would get to be king. Turning to the maid, he said, "Yes, please do. I would love for him to know how amazing these waffles are."

Mod
"And goodbye to you, dearest sister," Will said. Proud of himself for getting Morrigan to leave, he continued to smile. To nobody in particular, he said, "Well, I'm going to the library, for a change." He stood up and left the room.

The king had been eating and watching his children bicker. Let them sort out their own problems, he thought. When Will moved to leave, however, he pushed back his chair and stood. "Will! Wait up, I'll come with you. There's something I wanted to talk to you about." He jogged after his son until he caught up, following him to the library.