▸the inhabitants of yokoya island have a relatively egalitarian culture, based on economic self-sufficiency. they mostly live from fishing and farming, though some are also active as traders. their homes are made of wood and have steeply pitched thatched roofs to prevent the accumulation of snow. despite their unsophisticated economy, the kyoshi islanders are relatively well off. yokoya, like all the villages on kyoshi islands, houses its own group of kyoshi warriors and a statue honoring the late avatar. 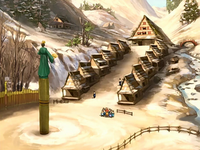 It was quite the dull morning for Tao. It consisted mainly of waking up early, hair a frizzled mess that was only tamed by the harsh tug of a brush, and slipping into her usual armored kimono. She had painstakingly painted over her face, white and red coating her lightly tanned skin, before tying her hair up in a loose ponytail. The ensemble was topped off with the standard kyoshi metal and gold headdress. Suddenly, a young woman was transformed into a warrior.

The rest of the morning had consisted of training. It had been long and strenuous, but nothing that Tao couldn't handle, especially the sparring section. Her agility was always her greatest strength during them, her small frame allowing for quicker movements than most could manage. Sometimes being short had its perks.

Training had just ended when she decided to stroll through the village market. It was already bustling with villagers, fisherman and farmers alike gathering to sell their fresh wares. She picked up a wooden basket at a small stall and moved onto another to pick up some fruits and vegetables for later. It didn't take long before it was half full. She didn't want to admit that a quarter of it consisted of ripe papayas—her favorite.

it seemed like lu beifong never strayed far from the shores of kyoshi island for long. it was hard for the locals of yokoya village to not notice the young man's infutuation with the village. why would a son of the beifong family want from the people of the island when he could be wherever he wanted to. even on the island, so far from gaoling, people knew of the beifong family name and the wealth and power that belonged to it. for the heir of the family to keep returning to their little village was always a cause for celebration; yokoya did not have much going for the ways of the world. they traded little, but there were plenty of other villages on kyoshi island that would bring the merchant more coin.

so, honestly, what was lu beifong's true intentions, making his way to yokoya village more often than any normal merchant would?

oh, as if that was a secret to anyone who lived here. well, perhaps tao....

"trinkets! trinkets and gifts from across the earth kingdom!"

lu laughed as he called to passers-by in the market of yokoya from his perch on his wagon. he was always a boisterous sort, jumping upon any opportunity he had to talk to someone. he had already drawn a large crowd, as per usual. the people of yokoya loved whenever lu would return from his adventures, always bringing new and exciting objects with him. plus, for the village girls, he was definitely a pleasant sight on the eyes.

however, lu only had his eyes on one girl, and his spirits fell a little when he didn't see her among his customers. oh well, the day was still quite young, and lu has sales to make.

sales should be taken lightly, as lu never charged the people of yokoya more than a quarter than what his items was worth. he had all the money he ever needed, really; he just enjoyed seeing the smiles and excitement on people's faces when they realized that they could honestly offered the trinkets of the upper classes.

The basket was getting full. Tao hefted it through the marketplace, her arms wrapped all the way around. There were a few stalls that she passed by and she considered whether stopping at them would net her anything else she needed. But ultimately, she decided to keep walking, thinking about how she would just have to come back some other time.

Just before turning into the path that lead to her home, she slowed her steps. The first thing she noticed was the crowd of people, gathering around what she thought was a wagon. It was hard to make out through all the people. And then, perched on top, was Lu.

It had been a few days short of a month since she'd last seen him on the island (not that she was counting, of course), but even after so long, his presence was welcomed by the locals. She could barely see the smiles on the crowd's face, and though she couldn't make out it out from so far away, she could see the way his face lit up with a laugh. She couldn't help her amusement.

Taking one last look at the path home, she made up her mind. She turned on her heel and walked towards the wagon. She came to a stop at the edge of the group, looking up to catch his eye. A playful smirk crossed her lips before she slipped around the crowd. There were less people on the side, and the few that were were polite enough to let her pass through. The uniform, she supposed.

"Anything good?" she called to him, feigning the same interest as the rest of the villagers. But unlike the rest of them, she gave a playful smirk. It was good to see him again, even if she was too stubborn to admit it.