We had a tie this month, so here's the second picture for our creative writing.

Give us your poetry, flash fiction, drabbles or short stories - anything YA and LGBTQ. 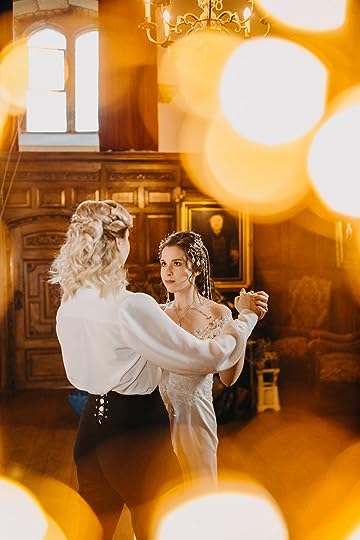 I don't really know how to properly format/write poetry (if there's even a specific way) but I hope this works!


When you laugh, you shine like stars in the sky.
Like the lights you hung around us, so I could see them inside.
Your pulse flutters quickly, like a hummingbird's wings.
I wish I could hold it and let it fly free.

I whisper your name, like a prayer or plea.
It's hard to tell, you make me so weak.
You hold me so gently, like I'll float away.
But with you as my anchor, I'm destined to stay.

The days pass so quickly, I hardly even care.
With you my love blossoms, petals in the air.
The tick of the clock, won't waver this truth.
My love, how time flies when I'm here with you.

I hear your footsteps, light on the floor.
Tapping a rhythm like a knock on the door.
You say, can I come in?
So slow and so sweet.
As I welcome you in to dance with me.

Helena wrote: "I don't really know how to properly format/write poetry (if there's even a specific way) but I hope this works!


When you laugh, you shine like stars in the sky.
Like the lights you hung around us..."

That's lovely, beautiful mood to it. (And who cares about format?) <3

I love this image...

The Duchess had arrived at Hampton some two days earlier, but she had already garnered much attention from the men. Cecilia had everything, born into aristocracy, she was a pleasure to behold and talented beyond all reason.
The first evening at court, she entertained the Queen with a most challenging piece, her skill on the lute on full display. Although her forward nature raised more than a few eyebrows, no one objected when she borrowed the instrument from one of the court musicians between dances.
As I looked about the room, I could see the lecherous stares she was receiving from a few young men, who probably thought of nothing more than how she might feel in bed.
Although she was polite to the men who seemed to trail behind her as she moved about the room, she paid none of them any more than the most casual acknowledgment.
I think most of the ladies were jealous of her beauty, so, conversation was terse at best when she attempted, their snobbish noses turned upward in condescension.
Today was the first time I had been afforded the opportunity to speak with the young Duchess, and I was not going to mince words.
“I was fortunate to have heard your playing on your first night in court and I must say, I was most impressed.”
“Oh, I do hope I wasn’t misconstrued as being flirtatious by playing, but those stuffy old groundes and galliardes were beginning to sour my stomach.” The corner of her mouth twitched with a tentative smile.
I couldn’t help but laugh in agreement. “Yes, I’m afraid the court musicians do need a change in repertoire, but until the Queen sees fit to make it so…”
“Do you play?” Cecilia was quick to ask.
“I have been known to play a tune, but never in so public a forum, and I’m afraid my skill lies on the virginal.” I waited for a cringe from her, the virginal being the least adventurous of instruments, and one that most young ladies are encouraged to play, should they be so inclined to enjoy music.
“Yes, I started there, but my father, oh thank the stars for him, encouraged me to pursue lessons on several instruments. Perhaps we could play together, if the opportunity presents itself.” She said, hopefully.
“Perhaps.” And that was where our conversation ended, Cecilia being summoned by the Queen, for she was a new lady in waiting.
It was a few weeks hence that our paths crossed again, but not in so intimate surroundings. There was a celebration of the Queen’s coronation, and everyone was expected to attend. To my surprise and delight, Cecilia entertained us three times during the evening, each time on a different instrument. I think I saw more than a few faces turn sour with jealousy over her talents, but I had the opposite reaction. I had been in desperate need, and was returning to the ball when I found Cecilia sulking in an annex to the throne room.
“Whatever is the matter, my dear?” I asked, genuinely concerned over her countenance.
“Am I forever to be snubbed for my talents?” She sobbed. “Lady Pritchard scolded me for my ‘haughty behavior’ as she put it.”
“My dear girl, Lady Pritchard hasn’t had an interested party since before either of us were born. She’s jealous of the attention, nothing more. Do not trouble yourself.” I pulled her to her feet, and into a private chamber reserved for the Queen’s convenience.
To my surprise she buried her face into my bodice, catching me quite off my guard. I could do nothing but respond to her, wrapping my arms about her. In the distance, the sounds of the ball could be heard, in spite of the paneled walls that separated us from it. Above the din of the court, the most pleasant dance was being played, something new.
“I must dance,” Cecilia announced, putting herself in such a position as to lend to a step.
Without thinking, save for the idea that anyone might enter, I took chance and began to circle her in kind. She smiled with my consent, and we began in earnest. “This is new.” I sighed, but so overwhelmed with the situation that I hardly knew if she had heard me.
“The dance or the music?” Cecilia asked, grasping my hand in hers as she turned.
“Both, I must say, but the music is heavenly.” My heart beat a tattoo in my chest as our bodies touched in passing.
“I am so glad you like it, and I am certain that I shall be missed for the playing of it.” She added.
“And why would that be?” I asked, honestly.
“For it is of my own hand.”
“You jest.” But I knew that she hadn’t. Her talents obviously extended far beyond the playing of music. Cecilia shook her head ever so slightly. “My word, a musician and a composer.”
Her face blushed with the telling of it, but I think there was far more to this girl than her talent. As our eyes met, a deep meaning came to us both at once and I thanked the stars for her. I could only hope that time would allow us the space to explore one another, before she was carried back to her home in the north.

Helena wrote: When you laugh, you shine like stars in the sky...

I love this poem, it captures the essence of the image perfectly.
Brooklyn

Brooklyn wrote: "I love this image...

The Duchess had arrived at Hampton some two days earlier, but she had already garnered much attention from the men. Cecilia had everything, born into aristocra..."

A very promising beginning to a sweet romance, with two strong-willed women - thanks for the story.

Helena wrote: "I don't really know how to properly format/write poetry (if there's even a specific way) but I hope this works!

When you laugh, you shine like stars in the sky.
Like the lights you hung around us..."

Only specific kinds of poem forms have formatting rules -- and in any case goodreads usually takes any odd spaces out, so trying to do unusual formatting is a pain.