The Kingdom of Edmond discussion

Mod
HI! Have fun! template is below! Please dont rp until your character is approved!
Name:
Age:
Gender:
Looks:
Personality:
Skills:
Family/History:
Other:

Name: Jade Lee
Age: 17
Gender: Female
Looks: Long, silky black hair. In the sun, it has light brown and reddish tints. The tips of her hair are dyed jade green for her name. Dark, almond shaped eyes and small heart shaped lips. Slender and fairly small. She has tan skin and always looks like she knows exactly who you are. Her hair is usually in a ponytail or a bun, rarely down unless she's going to sleep. She usually wears a black jacket, black lace-up boots, camouflage leggings and a navy blue T-shirt. Very asian.
Personality: She's quiet and rather unsocial. She doesn't really talk and is introverted. She prefers to be alone but has a few friends. She is pretty untrusting and doesn't give much away about herself at first, until she decides her opinion about you. You could say she's sometimes devoid of emotion, but that's not true. She's forced to be like that, pressured by her parents. Extremely ruthless and slightly sadistic, she's cruel and cold.
Skills: She's very sly and cunning, and not afraid to backstab. She's a spy, assassin, and warrior and absolutely despises royals, in their fluffy pink dresses and whatnot. Jade always has a tranquilizer gun, darts, and knife hidden up her sleeve. She can pretty much use any type of weapon. She doesn't like a lot of blood though, which is one of her weaknesses. She's good at sneaking and hiding, and fitting into tight spaces.
Family/History: She has a twin sister named Sakura, who is basically her opposite. Her parents are cruel, robotic beings who are involved with the front of the spy, assassin, and warrior group. They push Jade to her limits, completely ignoring her sister who is kind and caring.
Other: Leader of the rebels and siege

Mod
APPROVED! but your a mod it doesnt really matter.

Name: Sakura (means cherry blossom) Lee
Age: 17
Gender: Female
Looks: Wavy, silky dark brown hair. In the sun it has a caramel tint to it. She has pale, smooth skin, and brown, almond shaped eyes. Her body shape is similar to her sister's, with a long, slender build. She has bright caring eyes though, unlike her sister's suspicious, narrowed features. Her hair is usually flowing down her back, sometimes tied back with a ribbon. Sakura gives off more of a delicate build. She usually wears a nice shirt, a skirt, and sandals or sneakers depending on what she's doing.
Personality: She's very friendly and bubbly. Extremely trusting and cares about everyone. She tries to look for the good inside of you, much to her parent's distaste. She has a lot of friends, but they don't despise the royals like her sister. Instead, they're sometimes a bit jealous of them. She likes everybody immediately and tries to be friends with you no matter what you do.
Skills: She doesn't like violence, guns, or weapons. So, she's extremely fast, good at climbing and camouflage. Yes, she's on the spy/assassin/warrior team, but she sure doesn't act like it. She's also got healing hands, making her good at healing injuries and making medicines. She loves nature, and connects with plants and animals. Jade always makes her carry a tranquilizer gun, although she doesn't like it, she knows how to use it and doesn't mind it as much because it usually doesn't hurt or make blood.
Family/History: She is Jade's twin sister, and the complete opposite. Her parents despise and ignore her, making her feel worthless. Her parents think she's useless because she won't yield a weapon or fight.
Other: TBD

Name: Domingo “Dom” Yelich
Age: 20
Gender: Male
Looks: Messy dark hair, angular face, skinny bc he is poor and underfed
Personality: More of a follower than a leader; impulsive; good street smarts, zero book smarts; illiterate but hides it well; conniving and calculating; usually good-natured; can have a nasty temper (rarely)
Skills: Great fighter; fast runner; pretty fearless... “what’s the worst that could happen?” “I’ve got nothing to lose” mindset!
Family: Parents are former palace servants, raised Dom and his several younger siblings as best they could, with very little money
Other: he is not violent by nature... his fight or flight reflex is definitely flight!

Approved. Maybe he can be friends with Sakura?

Sure! That sounds great!

K! I was thinking that would be more likely, because Jade is...unsocial.

I can’t do it for long, but maybe start at the fortress?

Mod
Name: Kelly
Age: 18
Gender: Female
Looks: https://www.pinterest.com/pin/8126886...
Personalty: cares about very few people deeply. but she REALLY DOES care, hates royals, really cares about the cause, likes fighting, a tiny bit psychotic...sometimes, brave, loyal, protective, spunky.
Skills: Fighting, scaring people, caring.
Family History: Dad; unknown and mom died when she was 16, been alone living on the streets until she joined the rebels and is now a high rank.
Other: has a tattoo, she got it after she was alone. https://www.pinterest.com/pin/6580181...

reply | flag
message 14: by [deleted user] (last edited Aug 15, 2020 09:07PM) (new)
Aug 15, 2020 08:42PM
Name: Hannah
Age: 15 years old
Gender: Female
Looks: She has auburn hair that goes to her neck (it has been cut for easy care), she has pale skin that hasn't been touched by sunlight, her eyes are a bright green, she wears a clean brown dress that goes to her knees and a belt around her waist, she doesn't wear shoes.
Personality: She is quiet and nervous, but she can cause trouble at times, her mother was hung one morning when Hannah said the wrong thing to one of the princes, she rarely talks in fear that she would lose more people she loved if she did.
Skills: None
Family/History: Hannah was born to John and Sora Woodsong, Sora was from a long line of maids and John a family of servants, which is how Sora and John met, they go married and had Hannah. Hannah was made a servant like her parents and cleaned around the castle. Her father one afternoon had stolen a knife from the kitchen planning to kill the guards so his family could escape, but was caught. He was killed leaving Sora and Hannah on their own. While cleaning a prince kicked Hannah making her yell out rude words at him, he decided for punishment that her mother would die. Hannah has been living in the castle as a servant since.
Other:

Mod
I love it! It’s fine, but I’m trying to not have mythical creatures, is that alright? Sorry.

Mod
Name: Sebastian (Sabe) Quince
Age: 20
Gender: Male (Straight)
Looks: Sabe has straight brown hair, brown eyes, is muscular, white skin, wears a brown tunic and pants.
Personality: Sabe is charming, kind, bold, caring, but doesn't trust lots of people after his mother died
Skills: Sword fighting, weight lifting, using a mace, and throwing knives
Family/History: He worked in the stables as a stable boy though he practiced sword fighting on his own time. One day, someone found out that he was secretly training for fun and told the royals. The royals had Sabe's mother executed and his dad was already dead so they couldn't do anything to him. He grew very angry and hated the royals from then on. They threw Sabe in prison but he was able to break out using his incredible strength and he landed up on the streets. Sabe found the rebel and joined them, waning to destroy the royalty. (Don't know his rank but he's a strong fighter.)
Other: Even though he doesn't trust most there may be a special girl that will find his heart.

Mod
Ya! Thank YOU!

Name: Samantha Denver
Age: 16
Gender: Female
Looks: Brown eyes, black hair, pale skin
Personality: Kind, caring, generous, strong, brave, smart
Skills: Sword fighting, throwing daggers, intelligent and thinking quickly.
Family/History: Mom died when she was five. Then it was only her, her father, and her brother. Dad died in a war when she was ten. Wants to follow her dad's footsteps and be a spy now. Also, provide for her ten-year-old brother.
Other: She's a hopeless romantic. And doesn't believe in love anymore. But deep down inside, she hopes she'll find the 'one'.

Personality: Cairo is a chill and composed person. Opens up to Opinions but still challenges others beliefs and ideals. He's overall a nice person, especially to peasants and lower class people.
Though he can be a little arrogant at times.

Family/History: Was born a peasant, grew up in poor conditions. His Mother died of an illness when he was 10 and his father was executed for a crime he committed 2 years later. At that time he hated royals and joined the rebellion the same year. He been on the opposing side since then.

@WalkingCrown, I have a character named Jade, she's the first one on here, and I was wondering if maybe she and Cairo could like each other and maybe eventually have a relationship?

Ayla {Spellbound} wrote: "@WalkingCrown, I have a character named Jade, she's the first one on here, and I was wondering if maybe she and Cairo could like each other and maybe eventually have a relationship?"

You can look at her character if you want to know her personality!

I finished the character!

Mod
Cool! Can i see?

Just scroll up and it’s edited

Thanks where should he go?

Mod
anywhere under the island of the rebels topic 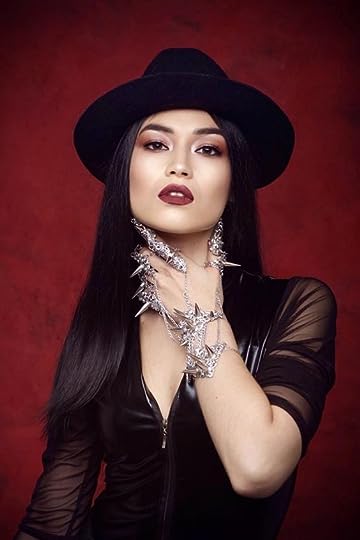 Personality:
Mei Li is your typical femme fatale. She's cold and fierce and fearless. Not much can faze her. She often comes off as blank and emotionless but once you take a look in those dark black eyes of her, you can see a storm of emotions. Behind those eyes you can see pain, you can see heartbreak, you can see love, and terror and fear. She's skillful at hiding her feelings but once you make the effort to get past that barrier, you'll see a completely different person. She loves hard and falls easily. Her heart is fragile and therefore she keeps it on lock at all times. Unless you're lucky. She fights for those she cares for and is willing to die for them too. 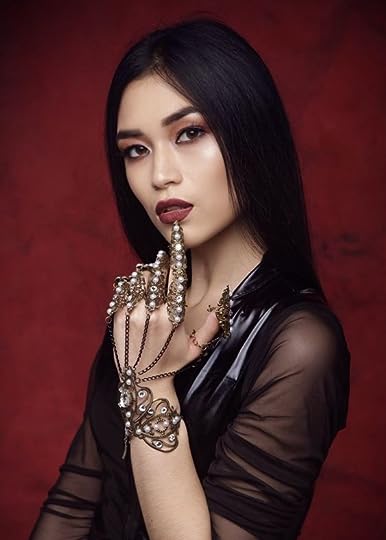 Skills: Mei Li is a fierce fighter. She is skilled at combat and works well with a bow and arrow. 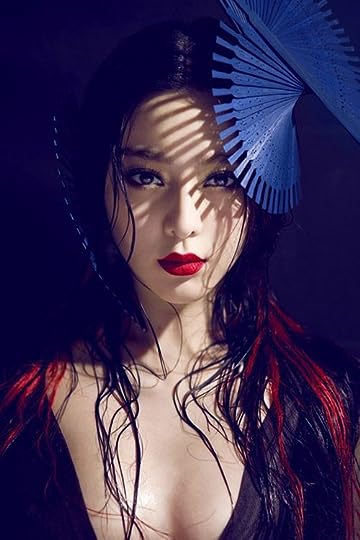 Family/History:Mei used to be a guard at the castle where she fell for a royal. She was sucked into the cruel world of royalty and was subjected to horribleness of the court. Mocked for her foreign eyes and skin color. Broken and tossed around. It was only when her younger sister fell victim to its cruelty and was killed as a result that Mei tore herself away from the castle and joined the rebels. She's fought hard since then.
Other: Don't talk about her sister.

Mod
Ya its fine! Except we already have a jade. Would you please ask ayla if its ok or just change your name please?

Aleya wrote: "Ya its fine! Except we already have a jade. Would you please ask ayla if its ok or just change your name please?"

I can change her name!!

The Kingdom of Edmond