"Apologies for not looking back through the archive to check, but has anyone read The Last Mad Surge Of Youth (2009) by Mark Hodkinson?

David Hepworth has recommended it on the Word In Your Attic podcast featuring Dylan Jones, which is wondefully entertaining in itself."

Your post triggered some vague recollection of having been recommended The Last Mad Surge Of Youth at some other point. That was enough to inspire a purchase and, as it arrived yesterday, I am striking whilst the iron is hot.

I recently finished Mayflies (2020) by Andrew O'Hagan and, so far, both books share a lot in common. Two timelines in different eras, and a similar premise - idealistic teenage boys in the 70s/80s consumed by music, and as more world weary adults in a contemporary world. It's a great structure for exploring those vivid teenage years and how they often shape what happens to us later.

Back to The Last Mad Surge Of Youth. Here's a bit more info...

Set in both the present day and the early 1980s, when Maggie Thatcher ruled the world (or thought she did) and new wave kids were dreaming up insurrection, The Last Mad Surge of Youth is a novel about bands, growing up, moving away and getting famous, suicide, staying at home and getting bored, fanzines, the bomb, love, alcoholism, egotism and self-doubt.

The narrative begins with the D-I-Y ethos of punk, steering through major label hype, to tired aftermath. While the protagonist, John Barrett, holds centre stage, his boyhood pal, Dave Carey, who opted out of the band for fear of playing live, is left at home, to brood. The pair meet up years later in controversial circumstances and ponder how now became then, and what they do next. 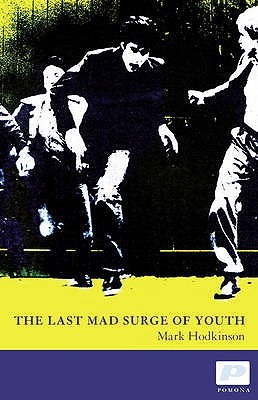 Mod
By the way, the book's author Mark Hodkinson is something of a polymath. This from his website...


Mark Hodkinson is an experienced investigative and skilled journalist and author, having written for The Times for two decades, three years as a columnist. He has also contributed to The Observer, The Guardian, FourFourTwo, Word, GQ and others.

He has published several acclaimed football books, including ‘Blue Moon: Down Among the Dead Men with Manchester City’ (Random House) which is regularly cited as a football classic and ‘Believe in the Sign’ which was long-listed for the William Hill Sports Book of the Year. His latest football book is The Overcoat Men. His debut novel, The Last Mad Surge of Youth, was nominated as Q’s ‘novel of the year’ in 2009. His latest novel, That Summer Feeling, published in 2018, received critical acclaim.

He owns Pomona Books (www.pomonauk.co.uk) and has published titles by Simon Armitage, Bob Stanley, Barry Hines, Ian McMillan, Ray Gosling, David Gedge, Stuart Murdoch (of Belle and Sebastian) and many more. He also commissioned and edited the much-acclaimed biography ‘JD Salinger: A Life Raised High’ which was made into a film starring Nicholas Hoult and is published in the United States by Penguin Random House.

Mark has produced and presented various documentaries for BBC Radio 4, including ‘JD Salinger, Made In England’, about the writer’s time spent in Devon during WWII and ‘Punk, the Pistols and the Provinces’ which looked at the impact of punk in the regions. His latest documentary for BBC Radio 4 is ‘So Many Books, So Little Time’.

A keen musician, Mark has played in bands supporting the likes of The Stone Roses, Pulp and The Wedding Present. He still writes and records music as Black Sedan (www.blacksedan.info). He owns the music PR company, Pomona (www.pomonapr.com).

According to Lee, Mark Hodkinson's memoir Believe in the Sign is also excellent, and Lee is someone who has no interest in football

The Pomona website currently has a few of Mark H's books free or v cheap. Yes, free. All you pay is P&P...

That Summer Feeling (£5)
Believe in the Sign (Free)
The Second Half by Hunter Davies (Free)
Spotland: The Sun Also Rises and Other Football Stories. Mark Hodkinson (Free)

I should also add that...