Mod
I just thought I'd start a sort of comic book reading journal or diary of what I'd read for the week. I'd just list what I read that day or week depending on the journal/diary entry. I'd talk about it briefly or perhaps comment about the particular comic book I read. I will include SPOILERS so beware.

Mod
So far it's Tuesday evening-July 21, 2020 and today I read let's see two comic books earlier. And yesterday, Monday, I read five comic books. After all you can read a comic book between 5 minutes to 12 minutes, depending on how dialogue-heavy the issue is or how many panels are illustrated. If the comic book issue is heavy on splash pages you can usually read it in a few minutes.

So far in the last two days I've read:

The current ongoing series of Batman/Superman (2019-current date) is a fantastic read. The illustration is very detailed. I liked the surprises especially at the end of the first issue. And also, I never really saw Superman pissed off in a comic book. He is always holding back, but when he's pissed, even two superbeings in the same power level as him doesn't stand a chance. The primary antagonist, the Batman Who Laughs, is one scary villain. He's basically a Batman from a different universe who was "Jokerized." And the best part of this series' first set of several stories is it showcased how superheroes can be better and more dangerous super-villains when they become their counterparts. And Batman, secretive as ever, and having trust issues as usual, perhaps needed to change his ways. Because the Batman Who Laughs seemed to be two-steps ahead of him and seemed to know his moves. After all he is Batman as well.

The Batman/Daredevil comic book team up is one of those rare occasions where DC and Marvel teamed up their characters. It's a good urban romp and more down to earth crime elements and street level crime fighting where the two similar characters go against the Kingpin and Scarecrow. It's just a nice romp to read.

Mod
Today I read Batman: Whatever Happened to the Caped Crusader? by Neil Gaiman.

It's a reprint of the two issues of Batman (1940-2011) #686 and Detective Comics (1937-2011) #853. Basically Batman died and his soul visited his funeral which was attended by individuals who were prevalent in his life. But the most emotional part was that he was "reunited" with his mother. It was heartwarming and emotional, at least for me as a reader. You can't help but shed a tear, I mean you lose your parents as a child murdered in front of your eyes. And then as you died and your soul left your physical body, she is the one you meet as you leave this plane of existence. 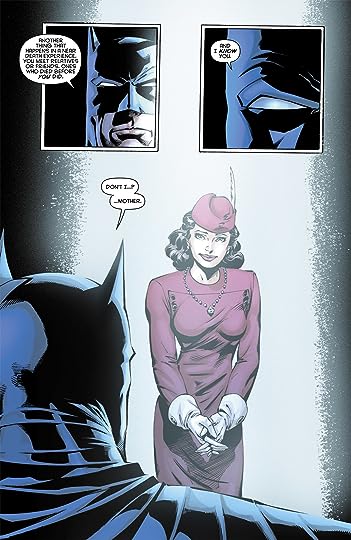 Captain Marvel/Shazam took on his father (controlled by Mr. Mind) in this issue. His father had the same powers as the Marvel family shared by Billy.

Mark Russel and Steve Pugh are great satirists. And their work on the Flintstones #1 and Billionaire Island #1 showcased their great talents. With the Flintstones, they brought the iconic cartoon family to the modern era and the setting of Bedrock is fantastic with their animal-use as technology. And wealthy men like Mr. Slate are presented as entitled bastards that view the regular man as nothing but an insect as his pawns. And with Billionaire Island, the wealthy are presented as wealthy bastards that try to "fix" the world. For instance to curb food shortage for the overpopulation in the world, they helped food to parts of Africa where the contaminated food killed thousands of people. Add in an assassin out to get the billionaire responsible for this and an island free from rules and taxes governing the world, and you get an interesting satire regarding the world today.

Mod
I've read a lot late last night up to this evening. They are:

I wanted to read team books. But something different something non-Justice League and non-Avengers. So I picked up Teen Titans the new ongoing series. And I was blown away. DC seemed to be writing really quality stories in their revamped Rebirth era. Teen Titans lead to Deathstroke and Titans. In fact, Deathstroke created a team called Defiance, a sort of Teen Titans team but more edgier. The Teen Titans book has a great dynamic in a jerkiness-type leader in Damian Wayne/Robin who at times would conflict with the team. I mean the team started with him kidnapping and exposing the weaknesses of his current teammates. But Deathstroke after failing to bring back his son Grant through the speed force, gave up killing, and is sort of a fantastic thought-provoking series from #20 and up as you get a commentary on death, killing, etc. And the best part is writer Christopher Priest's approach to the character as still a villain. I love it. As for the Titans series, they have trust issues which would be interesting to see how it transpires.

I am going to read each series from now on starting from their beginning issue #1. And I think I am leaning more on DC in the new ongoing series than Marvel, as I think Marvel's best in the modern era would have to be around mid 2000's to early 2010's era. I'll have more of that on a later entry.