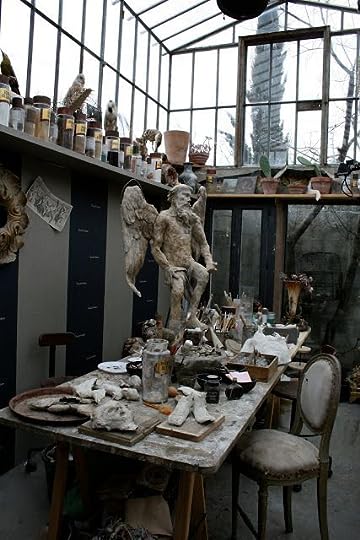 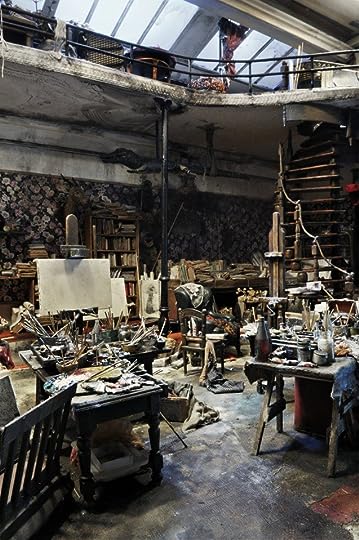 A public art workshop where all are welcome to work in

The trip had made him nostalgic and completely sentimental to the time before he had left her all those months ago. He regretted a lot of things... But most of all Atlas Chase regretted dragging Harper into all of his misadventures. However not for the reasons one might think.
"Okay, kitten we're almost there- just- just bear with me."
His lip tilted upwards in a hesitant- almost vulnerable smile. With his hood up, hair still dyed an ugly shade of blond and arm looped snugly with Harper's he was anything but the Flynn Rider all the guards were on lookout for. He hated this particular disguise of his but it had to be done if he wanted to see Harper again. Atlas of course had no reason to lead her to this secret place he had found a while ago, but he wanted to. And maybe he was still jealous slightly of Blondy and had to find a proper way to redeem himself so harper didn't exactly hate him forever.
And finally the time came when they stood in front of a worn out wooden door that looked just like every other door around them. Atlas paused, sent her another vulnerable hesitant smile as brushed a loose strand of hair back in his head. "You ready?"
The words barely left his mouth in a breath before he pushed open the door and took her hand in his.

Harper knew the town well, she had taken the time to get to know every road and alley. It would be safe to say she would be able to tell where Atlas was taking her from a mile away, that is, if she had been paying attention.
But she hadn't been, she was lost to the idea that she could possibly have some sense of normalcy again.
She didn't want to start over with Atlas, because that would mean erasing their adventures together, both good and bad. She had learned so much from being with him, and it would be a shame to throw it all away. No, instead she wanted to move forward. She looked towards the future, not wondering what it held, but rather, determined to make every second count.
It was obvious she was lost in thought, and the way she kept looking over at Atlas could be considered suspicious, but she didn't care, because she had nothing to hide. Atlas knew how she felt about him, didn't he?
He was smart, she was sure he could see it. She would only admit to it if he asked, but she did her best to show her appreciation for him. For all of him.

Harper had seen this place before, but only from the outside. She had never gone inside, but she knew all about it. It was a community spot, sort of like her kitchen. A place where all were welcome to create freely.
She gripped his hand in hers as they entered. All around were half finished sculptures and paintings. A mostly finished mural brought life to the otherwise bland wall. The glass ceiling provided natural light that many could only dream of having in an art studio.
Of course, they were not alone in the building, as there were a few people working tirelessly at projects in each corner. A few were students, one was an
old lady sewing doll dresses. None of them acknowledged the pair, they were too focused, and Harper could relate all too well.

((of course <3 thanks for patience i'll get to one soon))

When she gripped his hand tighter he could feel his heart beating in his chest ever so wildly. It was crazy that he felt so much in that little contact but he couldn't deny it. Not anymore. He had never wished to be anyone else other than himself at the moment- not because he didn't want to be here, but because he didn't want to be a fugitive. Someone that was constantly putting Harper in danger. Someone's whose life was practically forfeit. He was stupid, and he was selfish. But he was here with her so he refused to let his descending thoughts trample the mood.

This place. All of it. Reminded him of Harper- so he had brought her here in the hopes that her creativity could have an opportunity to flourish.

Every single time she glanced at him Atlas knew. And for some reason the attention made him nervous, was he walking funny? Was there dirt on his nose? Was she trying to tell him something but too embarrassed to? Something like ' I hate it here and I hate you?'. Or maybe his thoughts were getting overly fantastical and carried away. Either way, he pretended to not notice her stares and omitted from looking back even though he took every fiber in his being not too. At some point though, a shy hand of his squeezed her palm tightly also.

Her silence worried him. Maybe he had miscalculated and she didn't like a community hall like this. Maybe she wanted something more private. Maybe she didn't like the mess; the untidiness that was associated with the development of ideas.
He slowly turned to face her and a nervous yet curious brow rose in question. He didn't trust himself to speak.

Harper met Atlas's eyes with a mischievous grin.
"Please tell me you'll make something," she said, knowing that it would surely be entertaining.
"I can teach you woodcarving!" she clapped her hands together with excitement, completely forgetting her devious plan to get Atlas covered with paint. She always got distracted when she saw a nice set of tools, and there was one unattended waiting there like it was calling to her.
Harper's eyes seemed to keep getting better as she stared down Atlas, daring him to say no. She knew he couldn't, it would be another adventure.
Those eyes of his reminded her of many good times. She could look into them for hours, but there was work to be done, she would make an artist out of him yet!


It was emotionally exhausting having to mentally anticipate her reaction to his obvious advances. He was never the anxious type but since he had met her he was never nothing but anxious. It drove him mad, drove him even more so because she never seemed as affected as he was.
He knew his feelings for her- had laid them out bare to be picked on. It was Harper that was the true mystery.

"Make something?" he asked exasperated, brows rising just enough to show his genuine shock. He almost laughed dismissively, "I can't art".
A smile broke through at her offer to teach him but he shook his head rejecting it entirely- that was until he caught onto her challenge.
Scoffing at how easy it was to change his mind he raised two palms up defensively, a bemused smirk stretching wildly.
"Alright, do your worst Harper Denise Freed."

Harper thought it would be harder than that to convince him, but she was excited to get started.
she grabbed one of his raised hands and pulled him over to the desk she had spotted. She began examining the tools for the sharpest ones and sorting them my their usefulness.
"Now we should start with something simple, I don't want you chopping your fingers off," she teased, but she was only slightly joking. these tools were dangerous if you didn't know how to use them properly, and she didn't want him getting hurt.
"How about you make an apple? I'll show you!" an apple was the first thing she had ever made, naturally it was a bit wonky at first, but as she practiced, it became smoother and more realistic. it was a good starting point. apples are mostly one shape, say for a few simple details for the stem and such, so she thought it was a good jumping off point.