Mod
Post your views of chapters 31-40 of The Three Musketeers by Alexandre Dumas here!

D'artagnan disarms Lord de Winter who is impressed and takes the young man to visit Milady, saying that she can put in a good word for him at court. D'artagnan is happy that his plan has worked.
Now that he is spending some time with Milady, we get to know her better. D'Artagnan looks behind him in a mirror to see Milady's furious expression when she thinks no one is watching. There is even blood on her handkerchief from biting her lips. Then she reveals her child is Lord de Winter's heir.
Porthos goes to dinner at his mistress's house where we meet Monsieur Coquenard. After he goes to sleep (with his feet on the money box), Mme Coquenard and Porthos discuss his military uniform. Mme. Coquenard tries to keep Porthos on the hook, negotiating for cheaper deals on his equipment and giving him one of her husband's old suitcases. Porthos pushes for at least some cash.
What did you think of these chapters? What are your views on the relationship between Porthos and Mme. Coquenard? 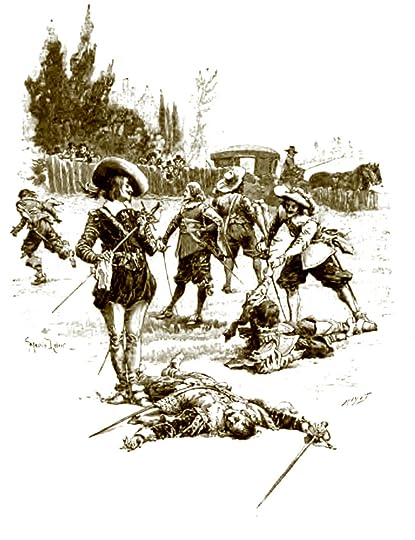 D'artagnan falls in love with Milady, but is informed by Kitty, her maid, that she is in not in love with him. After seeing Milady's letter to Comte de Wardes, D'artagnan decides to take revenge.
He also finds out that Milady too wants revenge on him. He got her in trouble with the cardinal and did not kill Lord de Winter when he had the chance.
Posing as Comte de Wardes, D'artagnan writes to Milady and invites himself over at 11 p.m. the next day.
Aramis receives a mysterious letter delivered by a beggar who demands that Aramis show proof of identification. With the letter came an enormous sum of money, which he claims is for a poem he wrote. But suspect it is from his mistress,Madame de Chevreuse.
Thanks to Mme. Coquenard's bargain hunting, Porthos is the new owner of d'Artagnan's old yellow horse. Because the horse reflects the man, Porthos cannot bear to be associated with that humiliating beast. He meets secretly with Mme. Coquenard and threatens to find other women to help him. Mme. Coquenard's desperation grows.
These chapters revolve around love and attraction of various kinds. Between D'artagnan and Milady, Kitty and D'artagnan, Aramis and Madame de Chevteuse, and Porthos and Mme. Coquenard. What did you think of all these relationships? 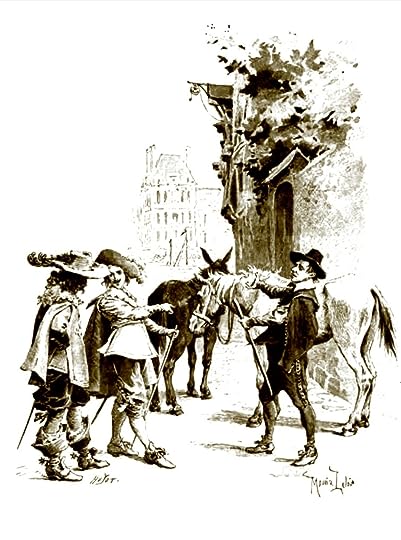 D'Artagnan has his plan of revenge againat Milady in place. He is taking advantage of Kitty's feelings towards him to get intelligence and finally visit Milady before his scheduled time. To reassure him of her affections, she gives him a sapphire, which turn out to be an heirloom of Arthos' family.
I am excited to know more about this woman!
When the fake Comte de Wardes falls from the grace of Milady, d'Artagnan starts to gain more of her attention.
She has struck a deal with him to avenge her against the count. Their evening is interrupted by the arrival of Comte de Winter.

Let us know your speculations, who is this Milady de Winter and why does she always make appointments at 11pm? Truly a curious character. What is the one word you'll use to describe her? And d'Artagnan... Barely 20 years of age and plotting such revenge plans!

d'Artagnan, full of pride over his self love and his affections for the mistress de Winter confesses to the crime of identity theft. He had felt confident enough in his love to seek Milady's forgiveness. Bur that wasn't the case naturally for she was only using him as a weapon of revenge.
In trying to restrain her physically, he gets to know her secret! The Fleur de lis on her shoulder! Did you see it coming?
I think this could be one of the reasons she kept nightly appointments: to avoid recognition.

d'Artagnan escapes her wrath in a disguise and runs straight to Aramis' house. My heart was racing at this point!
It was good of him to find lodgings for Kitty. Athos sells the sapphire ring which we now know for sure belonged to him.

What do you think of our protagonist's vanity and nature to fall in love so easy? Who is by far the best villain in the story according to you? What must've lured Monsieur Bonacieux to work for Milady de Winter? Or Milady to work for the Cardinal?

d'Artagnan receives two letters, inviting him to two separate rendezvous which are an hour apart.
His three friends decide to accompany him and rally men for the same. d'Artagnan meets with the Cardinal and the exchange felt quite interesting to me.

What did you think of the motives of the Cardinal in offering d'Artagnan a position in his siege? Can he be trusted?

I am eagerly waiting for the adventure that awaits d'Artagnan upon refusing the Cardinal!