Mod
Since the chapters are much like short stories, feel free to discuss them individually or as a collection. This thread is for chapters 1-5. Feel free to skip to the whole book discussion if that's your preference.

Mod
Chapter 1
There's a lovely rhythmic interplay of the visual and narrative in this whole book in terms of the spiral motif kind of ebbing and flowing (sometimes visually, sometimes textually, and then in combination). From that first two page spread before we're even aware of the "curse," we get a few spirals in the field overlooking the city. 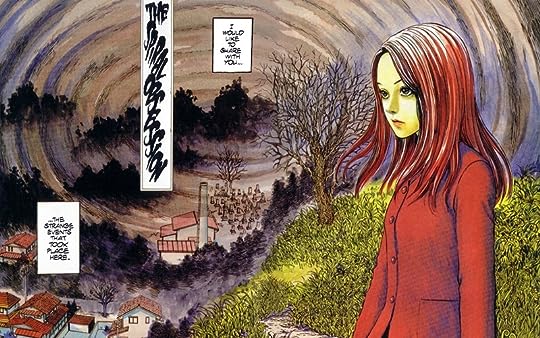 The immediate close-up panel that follows shows us that the field is actually filled with lots of these spirals, but they disappear visually as chapter 1 begins. 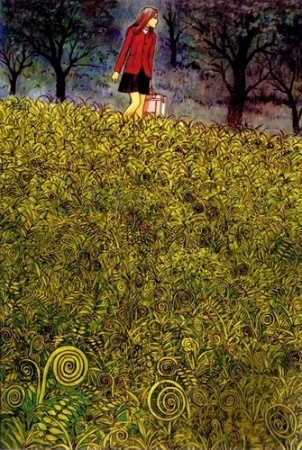 We know "strange events" took place in Krurouzu-Cho, where our narrator Kiri Goshima grew up and that she's in high school. The town name has several translations: "Dark Town," "Closed Town," and "Black Spiral Town." And we're introduced to Suichi Saito, a classmate and potential romantic interest whose father appears to be the first to fall prey to these spirals.

Thoughts on the beginning and the first chapter as a whole? Did the story pull you in? Are your family or loved ones aware of the spiral collection you've been hiding for years?

Marc wrote: "Are your family or loved ones aware of the spiral collection you've been hiding for years? ."

This made me laugh out loud :)

The book definitely hooked me! I'm finding the characters' expressions and reactions to the horror more impactful than the horror itself.

What an interesting story! I'm really curious to see where this goes...

Ito's artwork is rather mesmerizing. Not to take away from his storytelling, but there's a real visceral nature to it that taps into the emotions of the characters and translates incredibly well to extremes (rage, fear, madness).

Manga and anime, in general seem to deal a lot more with these extreme expressions (war cries before a duel, yelling another character's name in anger, etc.). I have read that soap operas are quite popular in Japan and that these extreme emotions in manga parallel those in soap operas to an extent. (Although this is certainly not unique to manga or Japan; Dostoyevsky's characters seem very melodramatic to me with lots of hand-wringing and outcries over the slightest of incidents.)

I found the first two chapters unforgettable. I like the story pacing and I like how Ito builds dread pictorially as well as through the dialogue. Both chapters end with an explosive reveal that I thought was very well done. I still get a little body discomfort in certain places when I read Ch. 2, or think about it.

Here's a question: How do you react to the frequent use of big capital letters of onomatopoeic language in the story?

I found that these were effective for the sounds themselves in my head but also for the way it paced my reading, where my attention was directed to a panel for the time it took to read the onomatopoeic letters there. Without them it would be more up to me to decide how long to spend on each panel.

Mod
Started today and was completely hooked from the beginning. On chapter 9, now, having finally set down the book (much to the dismay of a disgruntled cat) with plenty of nightmare fuel imagery to haunt my dreams.

The first thing I noticed from the beginning panels was the contrast between the town and nature. The town consists of manmade straight lines and right angles. The spirals are all in nature; the field, the clouds, the whirlwinds, the water. The first time we see the spiral obsession it's Shuichi's father staring at a snail (spiral) on a brick wall (lines and right angles). Later, Kirie's father says his ceramics are the work of nature, "we try our best ... with human hands, but sometimes nature can create things beyond our imagination."

Kirie's father also says that we can only see a piece of a pattern at a time. I think (hope!) this relates to Azami and Okada seemingly being sucked into a different dimension by the spiral in her head.

Lark, I hadn't thought about how the onomatopoeia affects the pacing. The uniqueness of some of Ito's terms certainly demands more attention than the usual "KAPOW" of many comics. The "FWICH"ing of the centipede was particularly cringeworthy.

I was just talking with my daughter about Uzumaki and she had a new thought for me, that one of the things Ito is exploiting here in such a skilled and unexpected way is just your everyday cartoon physics, and how horrific it is when set in any more 'reality based' context.

So at the end of ch. 1 we get this truly awful jumpscare of Shuichi's dad, who has somehow broken his bones and squished his innards into the shape of a spiral inside a tub. The picture with his tongue and the little nipple on one of the rings of the spiral peeking out and, oof, he still has his glasses on...really horrific. But also not any different from regular cartoon physics, where cartoon characters are always getting flattened or spaghetti-fied or something else--think the coyote in Road Runner.

So that's what I'm pondering, the way Ito takes these almost playful and cartoonish tropes of non-horror manga and amps them to the level that we see them as grotesque.

Mod
lark benobi wrote: "So that's what I'm pondering, the way Ito takes these almost playful and cartoonish tropes of non-horror manga and amps them to the level that we see them as grotesque. ..."

Now I really want to see the Junji Ito version of a flattened Wile E. Coyote peeling himself off of the road.

Whitney, I hadn't picked up at all the nature vs manmade lines, how interesting!

Lark, that's such a great point!

Mod
Lark, it's like cartoon body physics meets surrealism! The body discomfort effect is repulsively alluring. As a reader, I feel kind of like a moth to a flame. I don't think I consciously realized the impact the onomatopoeic language was having on me, but it definitely impacted the pacing and provided an almost audible droning pulse to the story in places.

There's such precision and detail to Ito's drawing style that it really elevates the nature vs manmade split you picked up on, Whitney. Feels like it is his realism that allows him to make the horrible so effective. Those full-pg panels in chapter 2 where you can see haunting faces in the sky in the dark clouds Suichi's father's ashes swirl into... 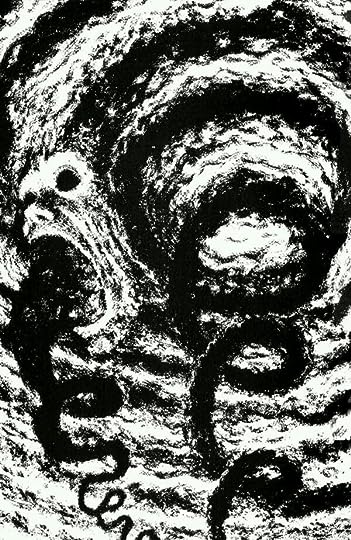 He also has this magnetic way of capturing madness (Suichi's mom cutting off the skin of her swirled fingerprints, the way the spiral image of her husband's coiled body returns and meshes with the centipede imagery. Kind of makes me gag just typing about it.). The every day becomes the monstrous (Azami's scar growing into a giant spiral hole in her head, which she fashionably hides with a hat.)

Kirie seems oddly passive in much of this. Alarmed, but no where near as concerned as Suichi.

lark wrote: "I was just talking with my daughter about Uzumaki and she had a new thought for me, that one of the things Ito is exploiting here in such a skilled and unexpected way is just your everyday cartoon ..."

That's a great observation from your daughter!

I must admit that I'm making slow progress with this one because it's so horrifying that I keep having to put the book down. But it's certainly clever, especially the art work.