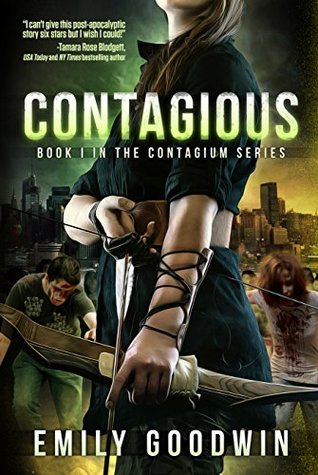 "I wasn’t afraid of death. If I died, it would be over. My worst fear wasn’t of dying, it was of living. Living, while everyone around me had their flesh savagely torn from their bodies to be shoved into the festering and ever-hungry mouths of zombies. It terrified me, right down to my very core, to be alive while the rest of the world was dead."

During the Second Great Depression, twenty-four year old Orissa Penwell is forced to drop out of college when she is no longer able to pay for classes. Unable to find a job, she moves in with her aunt in Indianapolis. Down on her luck, Orissa doesn’t think she can go any lower.

She couldn’t be more wrong. A virus breaks out across the country, leaving the infected crazed, aggressive and very hungry.

Orissa is used to only being responsible for herself. When she finds herself a reluctant leader of a group of survivors, she must make a choice: set aside her issues and help the others or go off alone in search of her own family and friends.

Mod
Contagious (The Contagium #1) by Emily Goodwin will be our 3rd GBR for August 2020.

Please clearly label which book you are reading when posting your comments.

Our MMC GBR review thread can be found here -https://www.goodreads.com/topic/show/...

Anybody got any thoughts on this one before we start?
Zombies-YAY. Someone has to have a worse year than most of us.

Has anyone read anything similar to this before?
Probably. I like zombie, dystopian and apocalyptic books

Anybody read anything else by this author previously?
Nope

Bit different to my usual reading, but always looking for things to recommend to students (some of whom are really into zombie things).

Ch 8 (view spoiler)[So the only other person with any backbone suddenly goes crazy and has to die?! What the???. (hide spoiler)]

Ch 11 (view spoiler)[I thought she was looking for her Aunt! Who is this Raeya to her? (hide spoiler)]

Totally forgot this one! Opening chapter starts fairly innocuously but these reports will turn out to be important.

Up to ch4. I can’t help but think their actions were stupid given that they’re in lockdown with all sorts of craziness taking place around them.

Up to ch7. Maybe it’s the zombie thing, but everything seems to happen very quickly and with little warning. It’s all rather grisly too.

Up to ch9. A fledgling plan, but they’re still looking for others to take over.

I can only imagine you're so ingrained to behave in a certain way that you forget the rules have changed.

(view spoiler)[ How come these otherwise healthy people are suddenly turning and nobody has any idea? This seemed to come from nowhere. (hide spoiler)]

Up to ch13. no idea why she's saved this girl, and the character of her grandfather (given what's already been said) will, I think, be important.

I'm really wondering if I should give this a try. I love this kind of stories but I've enjoyed them only through video games or tv shows 😃 If this worth reading? And are you going to read all the parts or only first one? 🤔 Author is unfamiliar to me.

Johanna wrote: "I'm really wondering if I should give this a try. I love this kind of stories but I've enjoyed them only through video games or tv shows 😃 If this worth reading? And are you going to read all the p..."

I'm unsure what I think of this yet. Not great but engaging enough to continue so far. Continuing depends on how good the first book is.

I can’t honestly say I’m enjoying this. While it seems a fairly good example of the genre, unless something quite amazing happens in the next half I can’t see me continuing.

Yeah I think this is looking to be a 2-3 star but we’ll see. I may or may not continue during this month just because of the challenge but time will tell Depending how much I have left and how the first Book turns out. Sorry for grammar I’m on my phone using audio to type.

Up to ch17. I understand why she’s made them travel to her grandparents’ home, but where on earth have they gone? Also can’t imagine where this can feasibly go from here.

Up to part two. All good things come to an end. I’m hoping part two doesn’t focus too much on a love triangle for Orissa’s affections.

Up to ch23. The compound is certainly well-organised, but there seems to be more to it. Did laugh at Scarlett’s enthusiastic response to the new A1 - and her assumptions being challenged.

Karen wrote: "Up to part two. All good things come to an end. I’m hoping part two doesn’t focus too much on a love triangle for Orissa’s affections."

Your comment made me think if I should give this series a try! 🤔

Do try it - if you’re into the genre I think you’d enjoy it. Up to ch31 now, and there’s little hints of potential action/events though still not a lot actually happening.

Finished. Review on home page. (view spoiler)[ That ending was not on! Sure we assume the worst - nobody could survive a shot at such close range. This leaves Orissa in a vulnerable position, and of course there’s the question of who’s done it. Sadly, I don’t think I’ll find it in myself to spend money on continuing the series. (hide spoiler)]

Karen wrote: "Up to ch17. I understand why she’s made them travel to her grandparents’ home, but where on earth have they gone? Also can’t imagine where this can feasibly go from here."

(view spoiler)[I almost there too. Like- Now what? I still don't get who Raeya is. Not family as she doesn;t have a room. So not sister or cousin but she is childhood familiar. So are they neighbor besties? (hide spoiler)]

Jamie wrote: "Karen wrote: "Up to ch17. I understand why she’s made them travel to her grandparents’ home, but where on earth have they gone? Also can’t imagine where this can feasibly go from here."

[spoilers..."
That was my take - best friends, but definitely close.

Karen wrote: "Up to ch23. The compound is certainly well-organised, but there seems to be more to it. Did laugh at Scarlett’s enthusiastic response to the new A1 - and her assumptions being challenged."

(view spoiler)[Yes she shouldn't have assumed a 'he' so quickly. (hide spoiler)]

(view spoiler)[Not on okay ending at all! That is maddening and feels like a gimmick to force you to the next one. Especially with a large price increase of book 1 to 2! I might continue as the second part did get a bit better, and I have a digital card that has the next book on hoopla, but I wouldn't pay for it. Like what the heck is Orissa suppose to do now?! At best, Hayden is seriously injured and good luck getting him and herself away. Or he is dead and she has new enemies to deal with solo. UGH! (hide spoiler)]

Karen, I might continue into book two and if I do, feel free to look into my spoilers for info but if I don't get to it this month, do you want me to message you with what happens at the beginning so you have some closure?

Chapter 4
(view spoiler)[ I’m enjoying this so far but it seems sort of the same as every other zombie book. I might get bored if there isn’t anything different about it. (hide spoiler)]

Please. I’ve got my guesses so it would be good to know if I’m right.

Jamie wrote: "Karen wrote: "Up to ch17. I understand why she’s made them travel to her grandparents’ home, but where on earth have they gone? Also can’t imagine where this can feasibly go from here."

Chapter 19
(view spoiler)[ Raeya is confusing me. It sounds like she’s from the area Orissa’s grandparents were from but she didn’t go looking for a house or any people. Also, when they got to the farm I would’ve thought walls to keep zombies out would have been a bit of a priority. They should have thought about defending themselves. (hide spoiler)]

77%
(view spoiler)[ This bit at the compound is starting to get a bit boring. There isn’t much happening. I feel like there isn’t really anywhere for the story to go. Someone could get hurt on a supply run, they could go more into the vaccine or the compound could become surrounded. The vaccine would be what I would prefer but that’s probably not gonna happen and the other 2 would just seem repetitive. (hide spoiler)]

Done
(view spoiler)[ That wasn’t an ending. You can’t just stop a book. Why would anyone shoot them anyway. They should’ve just gone straight back to the compound. The characters annoyed me a bit. I might read the next book if I can find it at the library but this one wasn’t that great. (hide spoiler)]

ch 3(view spoiler)[So he is/was alive so far but not doing good. Orissa gets stuck with this likely inbred family who try to keep he and another girl for " repopulation reasons." Eww. (hide spoiler)]

Done (view spoiler)[So it ends where the first book does, back with the same people who shot Hayden now have her...seriously?! We ignore them all book long and end with them. Also, I think Fuller has hidden info or ulterier motives.... distrurbing ones at that... (hide spoiler)]