Mod
This is a thread to discuss the Assekrem.

Assekrem, a high plateau in the Hoggar Mountains, the region is part of the Cultural park of Ahaggar (mountains) near Tamanrasset in southern Algeria. Hoggar National Park, Assekrem, Tamanrasset, Algeria - Image: Mohammed Amri

Assekrem is a high plateau in the Hoggar Mountains of southern Algeria, rising from the larger Atakor plateau. Assekrem is within Ahaggar National Park.

The hermitage of Charles de Foucauld, which continues to be inhabited by a few monks, is at the top of the Assekrem plateau.

In the heart of the Hoggar Mountains. The peaks are cores of old volcanoes. 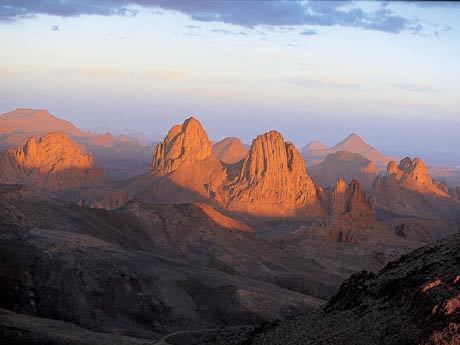 By the time we've reached the top of the path and the broad flat plateau on which Père de Foucauld built his refuge, we're above 9000 feet and gulping gratefully at the chilly air.

There is still three-quarters of an hour to go before sunrise, but the stars are fading slowly and a faint lemon-magenta glow is shading the eastern horizon.

Up here the mountains are all below us. Only one summit, that of Tahat, away to the north, is superior, and that by a few hundred feet.

Even before the sun comes up the view is breathtaking. The misty pre-dawn light compresses the spaces between the mountains, giving the appearance of a solid range to what we know to be a collection of eccentric individuals.

Said whispers in my ear.

'This is third best sunrise in the world, after Fiji and Ceylon.'

He pauses a moment for me to take this in.

'The purity of the air here is recorded by the meteorological station and sent back to the United States. To measure carbon and ozone in the atmosphere.'

(I'm not altogether sure about this purity of the air bit; it brings to mind something less reassuring that I recently read in Jeremy Keenan's book Sahara Man.

At In Ecker, less than 60 miles northwest of here, the French tested their first nuclear weapon. According to Keenan, there is anecdotal evidence of poisonous emissions and mysterious deaths immediately afterwards.)

A bitter north wind drives me to take shelter in the refuge. Above the doorway of this plain stone construction is a white marble panel. It reads 'Charles de Foucauld, juillet-décembre 1911'.

Inside, a narrow passage leads to a small chapel, where there is a picture of a lean Frenchman with a well-trimmed beard dressed in a white monk's habit, and, above it, the emblem of a red heart with a cross rising from it.

by Jeremy Keenan (no photo) 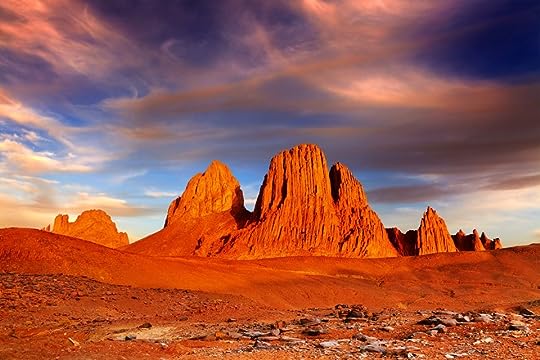 Perched at an altitude of 2180m, on top of the Hoggar black mountains, the Assekrem could have been an eagle's nest. Destiny preferred to make it a hermitage. Some 30 years ago, two Little Brothers of Jesus, Edouard and Alain, discreetly shared this splendid landscape between themselves, which offers to the visitor on a sunny day, a stunning panorama of the Tahat, the highest summit in Algeria, and at the worst a glass of tea and some biscuits. For this break of hospitality in a world of drought with temperature extremes, Edouard and Alain paid the price. Their monastic life is dedicated to Charles de Foucauld, founding father of their congregation who spent five months at Assekrem before he was assassinated by robbers at Tamanrasset, 50 miles away.

To get to Assekrem, you need not be a great walker. A 4x4 easily climbs up to the sanctuary where you can spend the night. You will need to drive for around five hours. From there, the path dug in the rocks leads to the hermitage (15 minutes of easy climbing).

Shiver as the sun rises over Assekrem, the mountains at the 'End of the World.'

Rock the Casbah in Algiers, one of the finest coastal sites on the Mediterranean.

Explore the best Roman ruins in Africa, and the oldest rock art in the world.

Tie your turban like a Yuareg and be swept up in the magic of the world's greatest desert.

The only English-language guidebook to the Sahara's most beautiful nation.

Special chapter on Traveling in the Sahara, taking you into the depths of the desert.