Here is the story I have been working on! I haven’t gotten a title figured out yet. Hope you enjoy!

Prologue
Wind whistled a soothing melody as it brushed gently past the tangled arms of the trees. The forest was suddenly alive with swaying branches and a symphony of rustling leaves. The trees themselves stood tall and firm; their roots buried deep beneath the ground, and their trunks weathered with twisted scars suggesting that they had lived here for quite some time. Up overhead stretched a canopy of emerald green leaves, with patches of blue sky and sunlight streaming through the cracks. That combined with the densely packed trees made anyone within feel as if they had entered a whole other world. And that is not too far from the truth...
It was early morning. The sun rose and shown it’s brilliant beams across the dark woods, chasing away shadows and replacing them with golden prisms of light. However, if you happened to be observing the forest at this time, you might have noticed something rather strange. Instead of disappearing as the sun ascended, the shadows all gathered around one large tree as if they were alive. They grouped together at the base of the tree forming what looked like a dark inky shroud. Tendrils of shadows spiraled up the trunk like spindly fingers and weaved about like spiders’ webs. The tree beneath which the shadow had gathered was a weeping willow, bent so low it’s leaves swept against the grass. This weeping willow truly appeared as if it were bearing a great sorrowful burden, and when the breeze ruffled its willows they gave a sound like a mournful sigh.
Then out from the midst of the shadows stepped a tall figure. It looked as if he had melted from the tree itself. At first he seemed to be composed entirely of shadows, but gradually his features sharpened and grew clear. He was clothed in an obsidian black cloak that reached his ankles, with indecipherable symbols etched in silver along the edges. He wore a simple black tunic and pants as well as a pair of tall leather boots with silver clasps. The wind suddenly grew restless.
With a majestic swish of the cloak, the shadows hissed and evaporated into the the crisp morning air. The cloak billowed about in the wind which threw back the cowl of his hood, revealing a ghostly pale face. He had a shock of raven black hair that contrasted drastically with his skin, making it almost translucent. His eyes were a startling silver that glinted with a pure unearthly light, and matched a single silver streak in his hair. His perfectly sculpted face was marred only by a thin white scar above his arched eyebrow. There was an aura of determination about him as he cautiously crept out from beneath the arms of the weeping willow and surveyed the landscape before him. The willows clung to him as if trying to hold him back, but he brushed them off. In doing so, a small mark on the inside part of his left wrist became visible. It was a tattoo in the shape of a strung bow with a feathered arrow about to be loosed. Quickly, he tugged his sleeve down to conceal the mark and looked warily about.
As the full brightness of the sun rose, he squinted like he was not used to the light, now that he was completely exposed without any shadows to obscure him, one could tell that he was perhaps fourteen or fifteen years if age. Glancing once back at the tree from which he had emerged, he set off down the grassy hill and a small village soon came into view. He paused briefly, taking in every detail of the little rundown houses and shops— which were silent now since it was still early dawn and no one was awake yet— before strolling purposely forward.
He had a mission. A task to complete. It was dangerous, yet the consequences if he failed were even more so. He shivered slightly, even though the wind had died down, while remembering the last time he had failed his Augur. Nothing would persuade him to abandon his mission like the last time. He would rather die than walk down a different path now. It was too late for rash decisions, and he had been working towards this point for nearly three years.
No one could change his mind...

...but he was gravely mistaken.

If you think there are things I should change please let me know :)

I think it amazing! How do people write so well?

ooooh, it's so good, and I love the details. Is this all you've written? I WANT MORE!!!!

There's only one thing that I really noticed, it's small but bugs me: Weeping willows don't grow in forests, they grow next to lakes, rivers, ponds, and streams because their roots need that bit of extra water. This takes place in the middle of a forest. Unless it was purposefully planted here, which is unlikely since this whole forest is probably centuries old. Do you get what I'm ranting?

Ah I see. I didn’t actually know that, so thanks for your input!! I’m working on chapter one right now. Once I’m finished I’ll let you guys read it! :)

Should we call you screen or yeep now?

(btw I changed my pfp, but I'm Amanda/Aero)

I have a rational fear of my account being deleted somehow. Everything I've spent years working on will be gone...

Mod
Yeah, that happened to my old account when I moved in fifth grade, I had this big story that I spent like five months working on the plot of the series and the story, the characters, the official artwork, etc. Then it just.... it was gone.

Mod
Was that sarcasm I heard from you young lady?
wow, I am so proud of my children. They have grown into such snarky babies.

Mod
have you now?
still proud of my snarky bois.

Mod
You have me? I'd say

I am writing the absolute worst story ever, called Generic Sci-Fi Title. 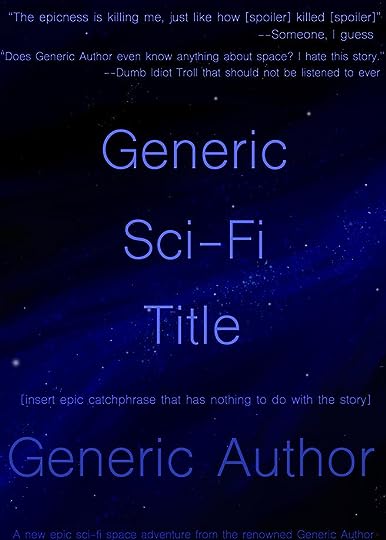 Dumb Idiot Troll is such a dumb idiot troll.

Mod
Here's my review:
"Generic Sci-Fi Title is such a passionate story, filled with generic plot twists and typical characters. A must read."

"Generic Sci-Fi Title is such a story, the plot is so plot filled, and the characters have characteristics" -Random Reviewer

Mod
I love this so much

Generic Sci-Fi Title is about generic main character that goes on an epic space adventure with her generic friends and also a generically epic war. Stuff happens, I guess. No scientific accuracy, because the only thing I, Generic Author, know about space is that Mars is a moon.

... isn’t Mars a planet? And also the Roman form of Ares?

I'm an astrophysics nerd, and the joke is funny because I know a lot about space stuff but am pretending not to in order to make fun of the typical generic sci-fi authors you see.

A B C D E F G gummy bears are chasing me. One is red. One is blue. One is chewing up my shoe. Now I’m running for my life, cuz the red one’s got a knife.

I’m the blue one.

Mod
what are you doing?

Mod
Ack, I keep thinking that you're Mandi because she's had that picture for a while, so LEMON GETS CONFUSED