Mod
This thread is focused and dedicated to the discussion of the Czech Republic.

What can we say about a life that was well lived - and yet yearning to see what lies around the corner?

The Epigraph from Hell and Other Destinations: A 21st-Century Memoir was a beautiful description of the basic theme of the book and is quite thought-provoking.

Havel writes: "What I love about the theater are arrivals, departures, and returns, entrances and exits, from the wings to the stage, and from the stage to the wings. It’s like going from one world into another.

And on stage, I love gates, fences, walls, windows, and, of course, doors. They are the borders between different worlds, cross-sections of space and time that carry information about their contours, their beginnings, and their ends.

Every wall and every door tells us that there is something on the other side of it, and thus they remind us that beyond every “other side” there is yet another “side” beyond that one. Indirectly, they ask what lies beyond the final “beyond” and thus broach the theme of the mystery of the universe and of Being itself. At least I think they do. —VÁCLAV HAVEL, from Leaving, a play (2008)

Who is Vaclav Havel? 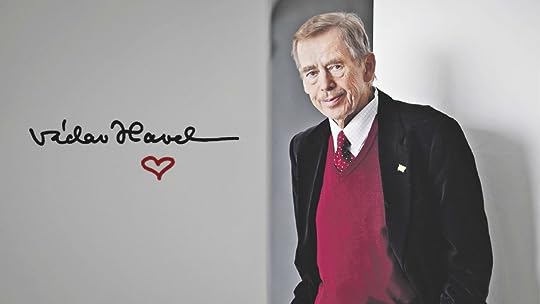 As a writer of Czech literature, he is known for his plays, essays, and memoirs.

His educational opportunities having been limited by his bourgeois background (when freedoms were limited by the Czechoslovak Socialist Republic), Havel first rose to prominence as a playwright.

In works such as The Garden Party and The Memorandum, Havel used an absurdist style to criticize communism.

After participating in the Prague Spring and being blacklisted after the Soviet bloc's invasion of Czechoslovakia, he became more politically active and helped found several dissident initiatives, including Charter 77 and the Committee for the Defense of the Unjustly Prosecuted.

His political activities brought him under the surveillance of the secret police and he spent multiple periods imprisoned, the longest being nearly four years, between 1979 and 1983.

Havel's Civic Forum party played a major role in the Velvet Revolution that toppled communism in Czechoslovakia in 1989. He assumed the presidency shortly thereafter, and was re-elected in a landslide the following year and after Slovak independence in 1993.

Havel was instrumental in dismantling the Warsaw Pact and expanding NATO membership eastward.

Many of his stances and policies, such as his opposition to Slovak independence, condemnation of the Czechoslovak treatment of Sudeten Germans after World War II, and granting of general amnesty to all those imprisoned under communism, were very controversial domestically.

As such, at the end of his presidency, he enjoyed greater popularity abroad than at home. Havel continued his life as a public intellectual after his presidency, launching several initiatives including the Prague Declaration on European Conscience and Communism, the VIZE 97 Foundation, and the Forum 2000 annual conference.

Havel's political philosophy was one of anti-consumerism, humanitarianism, environmentalism, civil activism, and direct democracy. He supported the Czech Green Party from 2004 until his death.

He received numerous accolades during his lifetime including the Presidential Medal of Freedom, the Gandhi Peace Prize, the Philadelphia Liberty Medal, the Order of Canada, the Four Freedoms Award, the Ambassador of Conscience Award, and the Hanno R. Ellenbogen Citizenship Award.

The 2012–2013 academic year at the College of Europe was named in his honor. He is considered by some to be one of the most important intellectuals of the 20th century.

The international airport in Prague was renamed to Václav Havel Airport Prague in 2012.

1. Your thoughts about the Dedication, the Epigraph and the beginning of the book?

2. Isn't life all about beginnings and endings, new arrivals and grief over departures. Every ending brings a beginning and so on. At least that is what we hope happens. And what about the final "beyond" - the universe. Many of us do not have our parents or our grandparents around and we miss them tremendously; but we carry on hoping that something is behind that next door. What are your thoughts about the Epigraph?

Other materials added to Glossary thread.