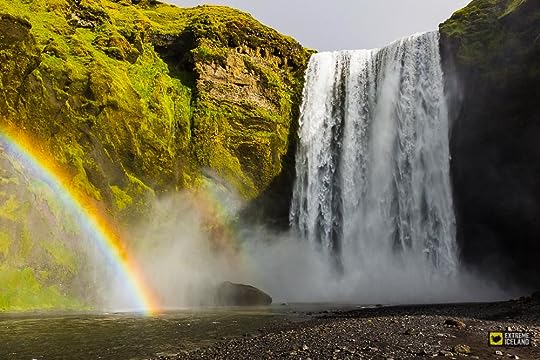 Cassandra was at the waterfall. She was enjoying herself. Or at least she was pretending too. She had been running away from her responsibilities again and she had gotten distracted by the joy of running. And she had ran. and ran. and ran. She ran until she came here and now she realized that she was very far from home. But she wasnt going to think about that now. She had come to enjoy the beautiful view. She watched the water crash down as the sun set. The sun was completely gone now. In a few minutes the brightness of the day would be gone. And she was out here. All alone. Lost. A small sliver of panic shot in through her usually fearless self. She flexed her hands and tried to remain calm.

Mod
Hazel lived not too far from here, he was just out for an evening stroll. That's what he would tell himself anyway, truth be told though sometimes people in the neutral town drove him nuts. He just needed some peace and quite for a moment. He needed a moment or two to himself. As he walked in his human form he pulled out a cigarette from his pack that was in his pocket. He lit it up with a lighter and and just gave a small grin, he remembered how much his mother had hated it when he would smoke. His twin brother always told him it would kill him or give him cancer. "He's such an idiot" Hazel mumbled to himself as he walked further down this path he was on. "Doesn't he know that he's the reason I do this." He was about half way done with his cigarette when he finally got to the water fall. He remembered his mother bringing him and his siblings here once or twice. It still was just as beautiful now as it was back then. He kept his eyes trained on the water that fell from the river up top. He soon threw his cigarette on the ground and stomped it out. He let go of the smoke that was in his mouth and watched as it danced in the air away from where he was standing. He shoved his hands into his sweatshirt pockets.

Cassandra took in a deep breath. She was calm. Very calm. She wasnt scared. She was fearless. That's what everyone always said. She flexed her hands holding on to a bar that was there to protect you from falling. The view was beautiful. Cassandra would have been able to enj0y it more though if she wasnt worried about getting home and whether her parents would be angry or not. She shook her head letting her black tresses shake out down to her waist. She wasn't afraid and she wasn't worried. She was going to enjoy the view. Right.... As enjoyable as lying to herself was Cassandra knew she had to get back home. There was only one way how that she could think of. So she stood on the bar and swung herself up the bar onto the narrow cliff side and began to climb up the mountain near the waterfall. She tried not to think about the gaping hole below her that led to sharp rocks and death. She finally swung up and landed at the top unharmed and still visible from below where she was standing. She was very near the rocks that began the waterfall and could see way below to where she had been looking at the very spot she was now standing. She chose not to think about the fact that she would have to get down the same way she came up. She looked out into the darkness below her that she had run in a short distance. She sat for a moment gazing out at the blackness and appreciated its beauty.

Mod
Hazel started to walk down to the shoreline of the lake that the waterfall was pouring into. He couldn't really hear anything over the roaring water. Though he didn't really seem to care, if anyone was around he had only hoped that they would keep to themselves, he was in the mood to really socialize. Once he got to the shoreline he looked into the water of the lake to see his reflection. However all he saw was his twin brother Coben. "I can't even look at myself and not see you." Hazel said to the reflection as if it was going to respond to him. Hazel found a nearby rock and climbed up onto it and just watched the water for what seemed like forever. He could feel the mist hit his face as the water came into contact with the ground below it. Hazel took in a deep breath and let it out slowly. He was trying to not let his family get to him but the memories haunted him every single day.

Cassandra stared up at the beautiful darkness and sighed. She was stupid. She thought that maybe if she could get a glimpse of what lie out beyond her she could make her way back but she had forgotten an important detail. It was dark out. Not entirely as she could still see her hands but not enough to see far below. She refused to become scared and decided that she would climb down slowly and carefully. Which she did. Until she slipped. She fell for a bit but then caught herself on the bar that she had been hanging onto earlier. She began to hoist herself over the bar which was very hard considering what lay below her and the fact that the bar was not very stable and her hands were a bit shaky from climbing up, down and hoisting herself over it. She gripped the bar hard and removed a hand from it feeling a sharp cut. It turned out that part of the bar was sharp and broken and it had just dug into her hand. "Wonderful." she muttered. Could this day get any better than this? She focused on keeping her hand away from the sharp side but since it was slick with blood it slipped and she was currently hanging by one hand onto a bar above a giant waterfall. So she linked her legs into the bar and began to crawl upwards. Great. Just great. Cassandra had no idea how she was going to explain this one to her family.

Cassandra reached out to grab the bar when her legs gave out and she fell. Down into the water. Luckily not quite near where the waterfall was but it was a long way down. She landed in a giant splash and sank. She didn't know how to swim. It was dark down under the water. Cassandra figured this was the end but refused to go down peacefully. She fought to get to the top getting in gasps of air until everything in her vision blurred and she passed out underwater.

Mod
Of course when Hazel was sitting there in self pity he saw something fall down into the water. It made a huge splash and had startled him half to death. He had jumped and in the middle of this jumped he almost fell off the rock backwards. He took in a deep breath and regained his balance. Whatever fell into the water wasn't coming back up. He decided that it wouldn't hurt to dive in after it. He took off his soaks and shoes, he then took off his jacket and emptied his pockets of the pack of cigarettes, lighter, and cell phone. Not like anyone ever called him on it. She also stripped himself of his shirt and dove into the water where the object had fallen. His eyes could see a little better in the dark than most people. He could faintly make out a face a person fell he quickly grabbed her hand and pulled her up towards the surface again. He had to swim back to shore with her in tow.

Cassandra was passed out. She didn't really have any thoughts but when she thought she was about to die before she passed out she had many. "Why wasn't I nicer to my brother? Why didn't my father let me live a little? Why am I going to die all alone in a place where no one will find me.? I wish I had gotten the chance to tell my parents I loved them. Who is going to feed the pet? If anyone finds my body what will they do with it? why couldnt I die after my life got exciting?" Many. Many. thoughts. but now she was passed out and if her brain was working it would have assumed she was dead.

Mod
Hazel eventually got to the shoreline, he was breathing heavily, he couldn't remember the last time he was that athletic. He was looking down at her. "Please don't make me give you CPR. I'm not certified" he mumbled. He soon put his hear to her chest to hear that her heart was beating though it was a bit slow. He then put his ear down to her mouth. There was faint breathing. He soon pulled his shirt back on. He pulled his sweatshirt back on. He placed on arm under her knees and the other behind her back. He got up on his feet lifting her up in his arms. He headed back down the path to his house.

Cassandra was sure she was dead by now. But was death black? Was death nothingness? Just her floating around? Shouldn't there be someone waiting for her? To judge her for her life? Cassandra figured she probably wouldn't pass if there was because she had run away from. her duties a few too many times for that. Still this was disappointing. She replayed how she fell into the water and trying to get back to the surface. Between the current and the fact that she couldn't swim very well. If she was being honest she couldn't swim at all. So between those two factors she really didn't have any chance. She was certain she was going to make it over the bar though. Until her hand got cut. And she slipped. And she was hanging by the legs that had carried her the whole day while she ran without stopping or had food or water. that had carried her through the rocky climb up the mountain. That had carried her for a very long time until she needed them most and they failed.