{ Where the Grump Traffic Cone is drowned }

Mod
Griffin wraps her sweatshirt around her waist and sits on the side of the river. She peers into the moving water, hoping to catch her reflection on the surface. Instead, she sees Altaria sit down next to her.

reply | flag *
message 4: by [deleted user] (new)
Jun 02, 2020 11:43AM
Victoria gently lifted the hem of her skirt as she walked along the banks. Her shoes were off, and one could just see her ankles. She stooped down, smiling, and ran her hand through the water.

Mod
(( I just realized both griffin and Altaria are shapeshifters.... imma change griffin's power hold up ))

reply | flag *
message 7: by [deleted user] (new)
Jun 02, 2020 11:55AM
Victoria turned, smiling. Her eyes widened, as she hadn't noticed anyone before. Victoria quickly straightened up, smoothing her dress down, her face flushed. Her pink hair was somewhat falling out of its elaborate bun. The hem of her skirt dropped so her ankles were no longer showing. "Hello..." she whispered, the corsets still suffocating her.

Mod
Griffin tilts her head, obviously concerned for the girl. She looked out of breath. Griffin brushes the tip of her nose with the side of her finger absentmindedly, like she didn't realize she was doing it. Her white hair was pulled in a ponytail but a few strains littered the area around her ears. "Hi, I'm Griffin." she says, carefully observing Victoria.

reply | flag *
message 9: by [deleted user] (new)
Jun 02, 2020 12:07PM
Victoria smiled slightly, the flush slowly fading from her face until she was once again paper white. She clutched the little heart necklace around her neck. "Pleasure to meet you, Miss Griffin," Victoria breathed.

Mod
Griffin nods, staring at the ground like it is the most interesting thing she had ever seen. She observes every crack and dent in the soft dirt floor as she said, "The pleasure is mine."

reply | flag *
message 11: by [deleted user] (new)
Jun 02, 2020 12:33PM
Victoria nods once again, smiling with teeth this time, though it is very improper. "Might I sit?" she asks, then does so without waiting for an answer. She looks out to the river, still smiling, smoothing her hair back into its bun. "It's so beautiful..." she whispers, her eyes sparkling with tears.

Mod
Griffin turns to the river and nods. She tilts her head for a moment, thinking, before dipping her finger into the water. Beautiful colors seem to melt off of her finger and into the water, swirling and mixing. Once she retracts her finger, the river glows with colors and light. It looks almost surreal.

reply | flag *
message 13: by [deleted user] (new)
Jun 02, 2020 12:41PM
Victoria laughs slightly, looking at the river. "I love it," she smiles. "My name is Victoria, by the way." She turns to Griffin, then suddenly clasps their hands together. Her eyes are still sparkling and she's flushed, though her hair isn't falling out of its bun anymore. "Thank you for that."

Mod
Griffin smiles and waves her hand over the shimmering water. "Of course. Nice to meet you, Victoria," she says as the river loses it's sheen and returns to its original color.

Mod
Griffin gazes into the water. "I wanted to have a fresh start. Meet new people. That kinda thing. You?"

reply | flag *
message 19: by [deleted user] (new)
Jun 02, 2020 01:41PM
Victoria smiled, bags underneath her eyes. She fidgeted with the necklace nervously. "Yes, I can... I can speak to the dead. When I want to, though sometimes they come out of the blue," Her head began to ache slightly, and she brought her fingertips to her temple, wincing slightly. "Speak of the devil..."

{ By that of course I mean Ardit }

Mod
(( Altaria is just sitting against a tree awkwardly XD ))

reply | flag *
message 23: by [deleted user] (new)
Jun 02, 2020 02:03PM
A woman rose out of the river. Her long black hair was sopping wet, and she stared with blank, dead eyes towards Victoria. There were large bags under her eyes, contrasting deeply with her pallor skin and thin frame. The thing grabbed Victoria roughly by the hair as her headache erupted. Victoria screamed, crying, as the thing dragged her with surprising strength to the river.
Victoria's dress ripped in several places and was dirtied by the mud. She continued to scream for help, until the thing yanked her hair hard, shutting Victoria up. The thing threw her into the river like a doll, where Victoria quickly sank due to the weight of her dress. She hit her head on a rock trying to struggle to the surface, sending blood into the clear water. Victoria passed out, sinking to the bottom while her lungs filled with water. The thing dissipated. 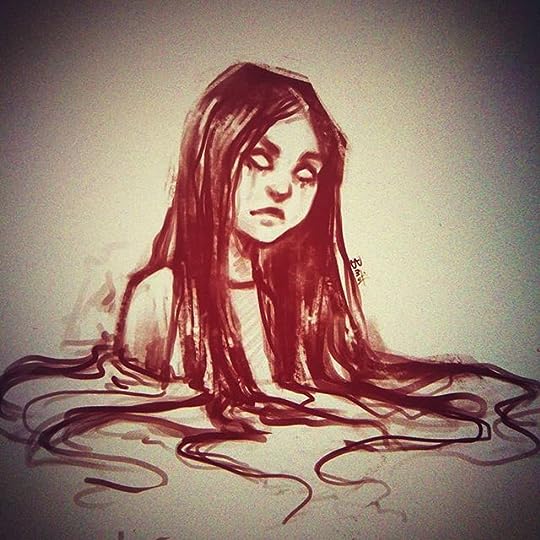 { don't make me make Ardit save her }

Ardit was strolling by when he noticed the person drowning "Oh my! What a dreadful dilemma!" he furrowed his eyebrows "Hmm I guess I must help you then" Ardit rolled up his neon orange pants, took off his shoes and socks then finally waded in. He reached out to Victoria "Ugh why must people drown each other? It's such a pain! What if I had to go to a meeting? This would make me unbelievably tardy!" Ardit reached underwater and grabbed Victoria's arm and tried to yank her up

Ardit groaned "CAN SOMEONE HELP?????" he tried to pull Victoria up

{ I was really hoping someone would come. I'm still hoping }

Mod
(( SORRYYY IVE BEEN HALF DEAD FOR THE PAST 2 WEEKS))

Mod
Griffin snaps out of her trance and rushes to help Ardit. “Whoops! Sorry, got lost in my own thoughts there!”

reply | flag *
message 41: by [deleted user] (new)
Jun 15, 2020 06:15PM
Victoria awoke, her wet hair matted to her forehead with blood. She ripped her skirt off, leaving her long nightgown underneath, and stumbled out of the water. She collapsed, breathing as heavily as she could with a corset.

Mod
“ Victoria! Are you okay?” Griffin asks, squatting down to examine her. ( I’m in an online class rn so my responses are gonna be kinda short)

Fuji was walking around not stealing anything for once when she saw the two soaked girls just kinda sitting there. She kept walking, not wanting to interrupt what looked like it might be a date gone wrong.

Victoria looked after Fuji. She was shaking, but didn't say anything, for fear that Fuji was another ghost.

Fuji was bored and did a handstand for fun, or maybe she just did it to show off. Either way, she's just walking on her hands now for no reason.

Victoria was still shaken, blood running down her forehead. She called softly to Fuji. "Are you a spirit?"

Ardit scrambling away almost walked into Fuji "Ah! I'm sorry!" he stared at her "Why are you walking on your hands? That very dangerous and it's not really my fault if you fall doing that. Hmm maybe you're you showing off? Never mind I don't want to get drowned like that other girl"