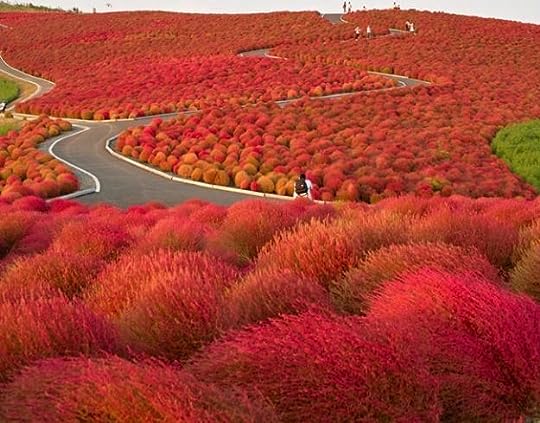 Mod
Jasmine walked with Jake to the garden on the side of the castle where Bloodmoon stayed. She locked her hands behind her back and walked at a slow pace beside him. It had been so long since they had been here. She recall running through red fields with Jake chasing behind her. Closing her eyes she could see just that scene. Breathing in the refreshing air, she opened her eyes and turned her head to look at Jake. "Nice thinking back there with Chad. I can't believe him." She frowned when she thought about Chad trying to kiss her

Mod
Jake listened to Jasmine as he walked beside her, when was the last time he was here? It felt like ages. He remembered when he was just a little kid, he was maybe five or six he had sneaked up behind the bloodmoon alpha and tried to tackle him. His parents had apologized profusely at what Jake had done. The bloodmoon alpha just laughed and told them to not worry. "He really makes my blood boil. I'm surprised he still gets to be a warrior after the stunt he pulled. Though Collin might not be able to do much considering Chad isn't apart of his pack." Jake rubbed the back of his neck a little bit. He was surprised that he didn't get more hurt. He actually got to walk away with no wounds.

Mod
"Some warrior," she said with a frown. "The guy has issues and I'm not one of them." Jasmine wrapped her arms around herself. The thought of Chad touching her made her want to take a bath. And then Jake had since it happen! He must think she was in the wrong for allowing Chad to get so close. She looked down. Spotting a pebble, she kicked it gently. "Thank you for coming to my rescue Jake. I don't think I could gave fought him off for much longer." She turned her head to look at Jake only to look back forward blushing. She recalled him saying to Chad that she was his. What did he meant by that? And why was she overjoyed?

Mod
"Well what kind of person would I be if I didn't? a bad one I suppose." He said answering his own question he had for her. "He's a prick anyway and I've always been looking an excuse to punch him really." Jake said with a shrug of his shoulders as he looked at her. He meant what he said earlier. She was his, he wanted to claim her, he wasn't sure how she would react. "So I wanted to talk to you about something important. It's about what the alpha said." He told her.

Mod
Looking forward, Jasmine went on walking at a slow pace. The alpha had basically told him to make her his mate. She didn't think Jake felt that way. At least until now. "You don't have to do what the alpha said." She found her gaze on the ground. Sure they been long time friends and maybe they had a bond akin to soulmates but that didn't mean they were right for each other. "It was just a suggestion. Besides I'm sure he was just joking ." She said the last part quietly. Dropping her head a little she sudden felt very nervous being in Jake's presence.

Mod
"Please just let me say what I want to say. " Jake told her as he looked over at her. He saw that she was no longer looking at him and was focused on where they were going. The walk was slow but it was the perfect pace to talk things out and think things over. "I had planned on telling you sooner but I guess fear had taken over, more than anything else. I like you, and I mean that I like you a lot Jas. I sometimes get caught up in the moment and call you mine even though I know you never agreed to be be mine. I get jealous sometimes of other guys who seem to be really close to you. Chad makes my blood boil when he touches you. I guess what I'm really trying to say is, I've wanted to be your mate for awhile, but I didn't want to over step my boundaries. Now if you like someone else or have someone else in mind then I hope he treats you well." Jake told her.

Mod
Jasmine's eyes widen at his confession. His confession. Coming to a stop, she wondered how he could say such words to her so straight forward without blushing or stuttering. He liked her and wanted to make her his mate. A smile begin to firm on her lips. What did this mean for them? That they could be together. But wait he didn't know her emotions. Turning to him she brought her chin up. A bright smile was on her face. Leaping forward she wrapped her arms around Jake's neck. She kissed him on the lips before she realize what she had done. Quickly she stepped back away from him. A blush formed on her cheeks. She placed with her head while keeping her gaze downward. "I'm so sorry Jake. That was me being excited. And I couldn't control myself. I liie you too. Always did--" She being to ramble on. She sudden felt very nervous in his presence.

Mod
Jake could feel his heart beat racing, it was so hard for him to say everything he said. He didn't like confessions they always scared him a little bit. He had to take in a deep breath just to get his nerves to calm down. Jasmine caught him off guard as she practically pounced on him. Jake couldn't help but smile once she admitted that was her being excited. He took a step closer and placed a finger lightly under her chin and lifted it up so that she would look at him. "Then be with me, I promise to always love you." He told her softly before he leaned down and kissed her softly on the lips.

Mod
Looking up into Jake's face, Jasmine's gaze softened. His words caused flutters to appear in her stomach. As he leaned down to kiss her she closed her eyes and leaned into the kiss. She laughed against his lips pulled back a fraction. "Here I was just thinking," She smiled and placed a hand on his chest. "You didn't see me in that way. But here we are now confessing to each other and sharing a kiss." She kissed him once more. "Or two." Stepping away she looked at Jake playfully and took off running through the red field laughing.

Mod
Hearing Jasmine confess her feeling to him as well made him feel good. It also made him feel like he had made the right choice in picking her to be his mate. She was fun, beautiful and so full of life, he couldn't imagine himself with anyone else. He saw the playful look on her face before she took off running. This had to be her favorite game, chase. They placed it all the time when they were little, one running away from the other, they played other things too but this was their number one. He let her get away from him a couple of feet before running after her. He wanted the game to last as long as it could.