[I don't see much discussion of LH-themed comics and graphic novels, so I'll start a few threads.]

Taboo was a series of horror comic anthologies, started by Stephen Bissette, probably best known for his art on Alan Moore's run in Swamp Thing. Bissette started Taboo in '88, to showcase "transgressive" work that would have trouble finding a publisher back then. There were nine numbered volumes (ending in '95), and a "Taboo Especial".

A lot of the Taboo strips still work very well today, though some obviously seem less "taboo" after 30 years. Some celebrated work was originally serialized here, including Alan Moore/Eddie Campbell's From Hell, and Jeff Nicholson's Through the Habitrails. A surprising number of Taboo strips are hard to find elsewhere, despite all the names that are well-known today: Chester Brown, Keith Giffen, Charles Burns (whose "Contagious" read like a rehearsal for Black Hole), etc. There's no shortage of dark, open-ended stories with unusual arcs, close to what we might call weird fiction these days.

Other than the earlier list, a selection of my favorites:

Tim Lucas/Mike Hoffman's "Throat Sprockets" had its first installment in #1; a few others appeared in later issues. I believe Lucas' novel of the same title developed out of the strip, but does not include the artwork. "Sprockets" still works its uneasy magic effectively. Its heady brew of obscure films and dark sexual obsession unfolds at a leisurely pace. Hoffman's art, especially in the first installment, features some striking panel layout and design.

Rick Veitch and Jack Weiner's "A Touch of Vinyl" (Taboo #3) features some lovely gritty, textured art, made on an Amiga (!).

#6 has an early photo comic by Charles Burns, predating most of his better known graphic work. Very nicely done, and we already see his unsettling and ambiguous approach to storytelling.

#8's highlight for me is the short Al Columbia piece, in the style of his The Biologic Show, Number: 0. No narrative really, but I never get tired of looking at pages like this: 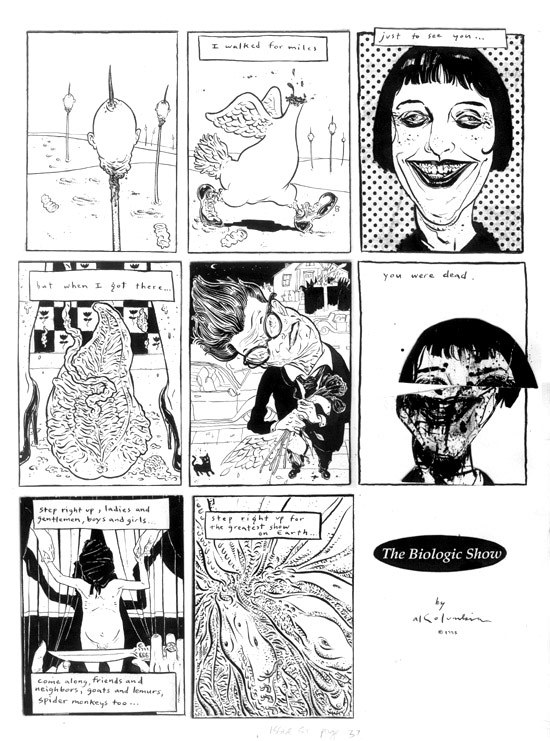 #9 has an elegant adaptation by Alec Stevens of a Jan Neruda story, and a Phil Hester piece that's quite different from his other work: 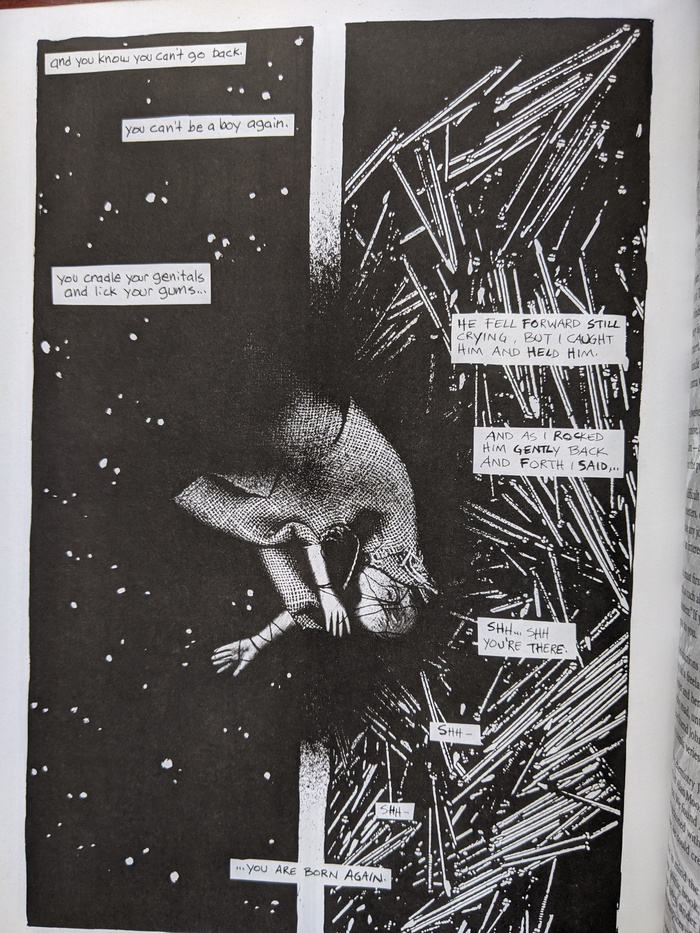 Thanks, Bill! And especially for the Al Columbia page.

Glad you enjoyed the Al Columbia page, S̶e̶a̶n̶! He'll get his own topic.