Mod
This is a thread dedicated to the history, well known people and events associated with the the territory of Wake Island and the US Minor Outlying islands. This is a US territory.

Wake Island (and the US Minor Outlying Islands)

There is no self promotion on the History Book Club.

Mod
The Story of Wake Island

by James P.S. Devereux (no photo)

“The courageous conduct of the officers and men who defended Wake Island will not be forgotten so long as gallantry and heroism are respected and honored.” Citation of the President

Two more raids shortly followed, further reducing the defensive possibilities for the men who were left to defend this small area of American soil in the center of the Pacific Ocean.

The first Japanese landing attempt on the morning of 11th December was repelled by a ferocious defense put forward by Devereux and his men.

Yet although the Japanese had withdrawn without landing, they continued to bombard the island by air and sea, and there was little hope of resupply for the Americans.

For fifteen days the American troops suffered endless bombardments until the second major Japanese offensive was launched on 23rd December.

Against overwhelming forces the Marines and other troops that were stationed on the island fought valiantly, but after forty-nine men had lost their lives in the fight, the remaining American men and civilians were captured by the Japanese.
The Story of Wake Island takes the reader to the heart of the action from the point of view of the commanding officer. It is a brilliant account of this tragic event that demonstrated the fighting spirit of the American soldier even in the face of unbeatable odds.

“His special vantage point enriches his commentary not only on the ill-fated military operation but also on the state (and spirit) of the prewar preparations to defend the island.” - John J. Sbrega, The War Against Japan, 1941-1945

James P. S. Devereaux was a United States Marine Corps general, Navy Cross recipient, and Republican congressman. After the ferocious fifteen-day battle of Wake Island - Devereux was interned for nearly four years in Japanese prison camps. His book The Story of Wake Island was first published in 1947 and he passed away in 1988.

Mod
This post is focused on the Battle of Wake Island. 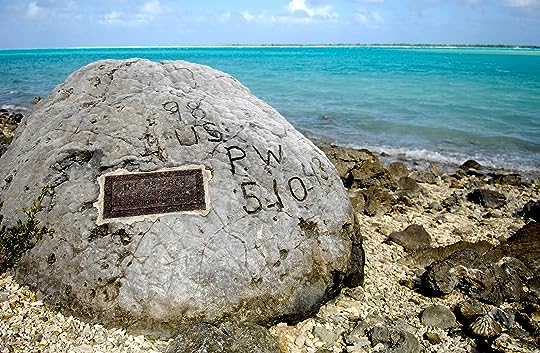 The "98 Rock" is a memorial for the 98 U.S. civilian contract POWs who were forced by their Japanese captors to rebuild the airstrip as slave labor, then were blind-folded and killed by machine gun Oct. 5, 1943. An unidentified prisoner escaped, and chiseled "98 US PW 5-10-43" on a large coral rock near their mass grave, on Wilkes Island at the edge of the lagoon. The prisoner was recaptured and beheaded by the Japanese admiral, who was later convicted and executed for war crimes. (U.S. Air Force photo/Tech. Sgt. Shane A. Cuomo)

The Battle of Wake Island began simultaneously with the attack on Pearl Harbor naval and air bases in Hawaii on the morning of 8 December 1941 (7 December in Hawaii), and ended on 23 December, with the surrender of the American forces to the Empire of Japan.

It was fought on and around the atoll formed by Wake Island and its minor islets of Peale and Wilkes Islands by the air, land, and naval forces of the Japanese Empire against those of the United States, with Marines playing a prominent role on both sides.

The island was held by the Japanese for the duration of the Pacific War theater of World War II; the remaining Japanese garrison on the island surrendered to a detachment of United States Marines on 4 September 1945, after the earlier surrender on 2 September 1945 on the battleship USS Missouri in Tokyo Bay to General Douglas MacArthur.

The Story of Wake Island (other topics)