Mod
This is a thread dedicated to the history, well known people and events associated with the the territory of the Northern Mariana Islands, the Northern Islands and Cocos Island and other island municipalities. This is a US territory.

There is no self promotion on the History Book Club.

"This history is written as a school text but one that teachers Chamorro children their heritage and culture. It is therefore extremely valuable as a resource giving insight into the Chamorro culture and experience. All Americans should read it."

by Sharon Tosi Lacey (no photo)

The commanders on the ground had to integrate the US Army and Marine Corps into a single striking force, something that would have been difficult in peacetime, but in the midst of a great global war, it was a monumental task.

Yet, ultimate success in the Pacific rested on this crucial, if somewhat strained, partnership and its accomplishments. Despite the thousands of works covering almost every aspect of World War II in the Pacific, until now no one has examined the detailed mechanics behind this transformation at the corps and division level.

Sharon Tosi Lacey makes extensive use of previously untapped primary research material to re-examine the development of joint ground operations, the rapid transformation of tactics and equipment, and the evolution of command relationships between army and marine leadership. This joint venture was the result of difficult and patient work by commanders and evolving staffs who acted upon the lessons of each engagement with remarkable speed. For every brilliant strategic and operational decision of the war, there were thousands of minute actions and adaptations that made such brilliance possible.

Lacey examines the Smith vs. Smith controversy during the Saipan invasion using newly discovered primary source material. Saipan was not the first time General “Howlin’ Mad” Smith had created friction. Lacey reveals how Smith’s blatant partisanship and inability to get along with others nearly brought the American march across the Pacific to a halt.

Pacific Blitzkrieg explores the combat in each invasion to show how the battles were planned, how raw recruits were turned into efficient combat forces, how battle doctrine was created on the fly, and how every service remade itself as new and more deadly weapons continuously changed the character of the war.

The May to November 1944 Marianas Campaign played a major role in ensuring a U.S. victory in the World War II Pacific theater. Two historians who are authors of books on the Pacific war gave talks on two key events of the campaign: The Battle of the Philippine Sea and the Battle of Saipan. This event was part of the National World War II Museum’s annual conference.

Mod
This post focuses on the Mariana and Palau Islands Campaign of World War II. 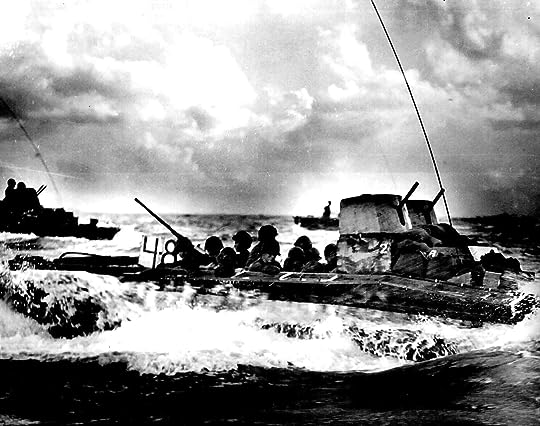 A Water Buffalo, loaded with Marines, churns through the sea bound for beaches of Tinian Island near Guam. July 1944

The Mariana and Palau Islands campaign, also known as Operation Forager, was an offensive launched by United States forces against Imperial Japanese forces in the Mariana Islands and Palau in the Pacific Ocean between June and November 1944 during the Pacific War.

The United States offensive, under the overall command of Chester Nimitz, followed the Gilbert and Marshall Islands campaign and was intended to neutralize Japanese bases in the central Pacific, support the Allied drive to retake the Philippines, and provide bases for a strategic bombing campaign against Japan.

In response, the Imperial Japanese Navy's Combined Fleet sortied to attack the U.S. Navy fleet supporting the landings. In the resulting aircraft carrier Battle of the Philippine Sea (the so-called "Great Marianas Turkey Shoot") on 19–20 June, the Japanese naval forces were decisively defeated with heavy and irreplaceable losses to their carrier-borne and land-based aircraft.

U.S. forces executed landings on Guam and Tinian in July 1944.

After heavy fighting, Saipan was secured in July and Guam and Tinian in August 1944. The U.S. then constructed airfields on Saipan and Tinian where B-29s were based to conduct strategic bombing missions against the Japanese mainland until the end of World War II, including the nuclear attacks on Hiroshima and Nagasaki.

In the meantime, in order to secure the flank for U.S. forces preparing to attack Japanese forces in the Philippines, in September 1944, U.S. Marine and Army forces landed on the islands of Peleliu and Angaur in Palau. After heavy and intense combat on Peleliu, the island was finally secured by U.S. forces in November 1944.

Following their landings in the Mariana and Palau Islands, Allied forces continued their ultimately successful campaign against Japan by landing in the Philippines in October 1944 and the Volcano and Ryukyu Islands beginning in January 1945.

Author of Lincoln and His Admirals (winner of the Lincoln Prize), The Battle of Midway (Best Book of the Year, Military History Quarterly), and Operation Neptune, (winner of the Samuel Eliot Morison Award for Naval Literature), Craig L. Symonds has established himself as one of the finest naval historians at work today.

World War II at Sea represents his crowning achievement: a complete narrative of the naval war and all of its belligerents, on all of the world's oceans and seas, between 1939 and 1945.

Opening with the 1930 London Conference, Symonds shows how any limitations on naval warfare would become irrelevant before the decade was up, as Europe erupted into conflict once more and its navies were brought to bear against each other.

World War II at Sea offers a global perspective, focusing on the major engagements and personalities and revealing both their scale and their interconnection: the U boat attack on Scapa Flow and the Battle of the Atlantic; the "miracle" evacuation from Dunkirk and the pitched battles for control of Norway fjords; Mussolini's Regia Marina at the start of the war the fourth largest navy in the world and the dominance of the Kidö Butai and Japanese naval power in the Pacific; Pearl Harbor then Midway; the struggles of the Russian Navy and the scuttling of the French Fleet in Toulon in 1942; the landings in North Africa and then Normandy.

Here as well are the notable naval leaders FDR and Churchill, both self proclaimed "Navy men," Karl Dönitz, François Darlan, Ernest King, Isoroku Yamamoto, Erich Raeder, Inigo Campioni, Louis Mountbatten, William Halsey, as well as the hundreds of thousands of seamen and officers of all nationalities whose live were imperiled and lost during the greatest naval conflicts in history, from small scale assaults and amphibious operations to the largest armadas ever assembled.

Many have argued that World War II was dominated by naval operations; few have shown and how and why this was the case. Symonds combines precision with story telling verve, expertly illuminating not only the mechanics of large scale warfare on (and below) the sea but offering wisdom into the nature of the war itself.

Mod
Episode 133: The Battle of the Marianas

In June 1944, the next targets for attack in the US Central Pacific campaign were the Marianas Islands. They were to be a staging area for a future invasion of Japan. Capturing the island of Saipan was the first objective.

Saipan in the Northern Mariana Islands offers WWII history, beautiful blue waters and a fusion of cuisines and cultures.