We get a big vision scene with Dalinar as we see the Day of Recreance, when the Knights Radiant abandoned their oaths. We are not given any answers besides the event itself. I'd say this scene is central to the series and won't be more fully investigated for a while.

Dalinar, Adolin, and Navani start documenting his visions and are trying to prove that they are true and accurate by looking in history books. Think about how Dalinar feels, receiving visions "from the Almighty" about heretical events, when his own religion says these visions are blasphemy. While we know this is not Christianity's way, what if you, as a Christian, received involuntary accurate visions about the past and hear audible messages of direction? Make it personal. Feel the spiritual pull of his situation.

Meanwhile, Wit says goodbye to Dalinar, saying he must go. Wit warns Dalinar about Sadeas, only for Sadeas to clear Dalinar of all suspicion of the king's attempted assassination.

Then later, WE SEE DALINAR GO ON AN ULTIMATE RAMPAGE. Dalinar saves Sadeas while on a joint plateau assault. It's a great scene. "That storming book just saved your life, Sadeas." #micdrop

What was Wit saying? What does he mean?
Why did the Knights Radiant abandon their oaths? What were the consequences?

Kaladin makes the big decision to help the wounded from other bridge crews. He teaches his team about honor and what's right to do. Bridge Four also does more training and finds a clever way to smuggle spheres out of the chasm. Rock = Robin Hood.

Later, thanks to Teft, Kaladin realizes his powers and FLIPS. THE. HECK. OUT. Kaladin runs to the edge of the warcamp and plains in an anxious frenzy. He then sees a stranger in black, playing a pipe, sitting next to the fire. 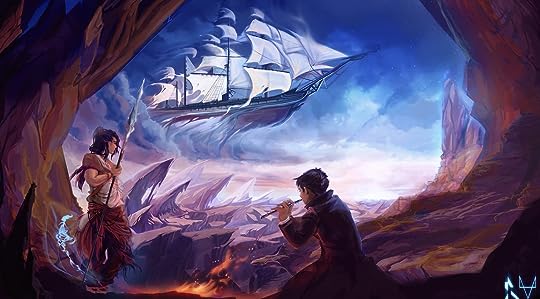 Our Black Piper is (my favorite) Hoid/Wit. He tells the wonderful story of The Wandersail. The moral of the story hits hard, particulary in Kaladin and Dalinar's situations. Funny enough, Hoid/Wit admits that not all the story might be true.

The purpose of a storyteller is not to tell you how to think but to give you questions to think upon. Too often we forget that.”

This quote made me think of the Bible's treatment of "story" and the art of storytelling. I love theology, but many times scripture is not telling us what to think but rather how to think.

What thoughts did Hoid's section stir in you?
How often do we become anxious about new revelations we realize about ourselves?
How does Hoid's quote related to Christians?

Dalinar's sections are growing on me. He's an interesting character, split between what he is being told to do and the way of life he's grown up with. His spiritual struggle is one of the things that makes me relate with him so strongly. It's hard to be raised to believe one thing and then, later in life, realize that the thing you've always believed may not be accurate.

I think Wit knows a great deal more than he's letting on to anyone else. Sadeas doesn't feel totally on the up and up to me. I feel like he's playing a deep game, one that Dalinar doesn't see because he wants to see the good in people.

Kaladin's freaking out about the stormlight stuff makes complete sense. His whole world is also being turned upside down (like Dalinar). I think it's interesting that Syl and Kaladin are so tightly bound together. I wonder why that is.

Hoid's story reminded me of biblical parables, too. A story can show truth without being literally true in the sense that it actually happened. This is why things like fairy tales, Shakespeare's plays, and more have lasted for so long and continue to impact people today. They are true and relatable.

Getting to see this different side of Wit was pretty cool, too. I wonder about his story.