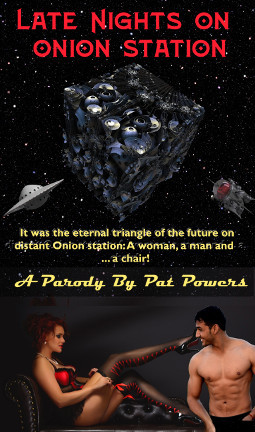 Onion Station lies in the outermost reaches of human-explored space, a gigantic artifact created by the alien Zuks, artificial intelligences that are so badly programmed that they are extreme libertarians. They run Onion Station with a fine disregard for safety, comfort and well-being of the various alien species that dwell in their station, including the humans.

But it's the beings who live in Onion Station that make it the unique, exciting and strange place that it is, and when the Earth Ambassador to Onion Station starts dating an actual human man (much to her mother's relief) everything changes on Onion Station. This simple act of dating will bring together a fascinating group of characters:

Kitty Reinhardt, the human ambassador to Onion Station, is totally dedicated to her work. She earns the 25 cents an hour that the tight-fisted Zuks pay her the hard way, i.e., attending diplomatic receptions and helping Earth firms negotiate trade deals with the many other alien races in Zuk space. She's proud of what she does for humans in her role as ambassador (but it is too bad about the starving people who die regularly in the lower corridors of the human sector of Onion Station). But it's her relationship with her more than just comfortable chair that is a source of deep shame to her, even though she's not at all guilty about her taste for kinky maledom/femsub bondage sex.

Mike Bonus, the trader with a heart of gold who buys the contracts of starving humans by the dozens on the cheap at Onion Station and sells them off to slave traders on crapsack worlds for a fat profit – and who is revered as a saint by the humans whose contracts he sells.

Kitty Reinhardt's chair, which seems sentient to Kitty, given that it converses with her and does things to her that previously were confined to safely nonsentient machines like vibrators -- but which the Zuks SWEAR is not sentient.

The Sisters of Mercy, who rescue starving humans crawling through the mean corridors of Union Station ... but whom many starvelings would describe as anything BUT merciful.

Dweezil the Dreddarian, a six-limbed otterlike alien with a sharp eye for info-trading and a very commercial approach to friendship.

The Fringe, treelike aliens who have a taste for Earth epiphytes to hang in their canopies.

But most of all, you'll have fun, and lots of it, as a favorite series is parodied senseless by someone who has read and enjoyed every book in the series.

Okay, this sounds hilarious.
I am going to have to add it to my already huge 'to-read' list.

Janet wrote: "Okay, this sounds hilarious.
I am going to have to add it to my already huge 'to-read' list."


Thanks for the interest! Speaking as the author, I can assure you it is 30 percent more hilarious than any other space opera parody ( with the possible exception of "Star Smashers of the Galaxy Rangers"). Also, four out of five mad scientists say it makes any reader taller, thinner and richer, and not just because I paid them to!