Mod
Comments on this board are made with the assumption that readers have finished the book and may include spoilers.

Mod
Hard to put down once you get started.
Here is a review by Diane: https://www.goodreads.com/review/show...

Mod
I'll be starting it tonight. Looking forward to rereading it.

I finished this one up the other day. It was my first Shelby Foote novel, and won't be my last!

I was not really familiar with the Battle of Shiloh, so this was a great history lesson for me. I liked the structure of the novel, allowing us to see both sides of the battle. What each side thought of the other. Interesting that often times the soldiers did not 'recognize' the other side as anything like themselves. Having Metcalfe start and end the narrative was very effective - and quite telling, I thought.

I had a little trouble keeping the generals and other big guys apart, but that's due mostly to my meager education on the subject. I went back through all my highlights/notes after reading this and everything came together much more clearly for me.

Another book I would never have come across without this wonderful group! We have 42 libraries in our system, and only 1 had a hard copy of this book!

Mod
Candi, I had to go to Wikipedia for pictures of those historical characters, since the fictional characters described them so well, I wanted to see their likeness. Thank goodness for Matthew Brady. There was also some information on Nathan Bedford Forrest's son, who his father was looking for during the battle.

Oh, that's a great idea, Diane. I was quite impressed with the physical descriptions of those men. I definitely had an image in my mind of what they looked like, and I should see how close my own picture was to the real thing!

Mod
I have a very early copy and it appears to be missing a word. On page 150 where Jefferson Polly is describing Col. Forrest, it says "From that first instant when I saw him walk into the lobby of the Gayoso, I knew I was looking at the most man in the world."
Does anyone's copy have another word between 'most' and 'man'?

Mod
My copy reads the same. I read it over a few times, but couldn't decide if an adjective was left out, or if he really meant "most man".

I didn’t pick up on that. Forrest was such an extraordinary leader, I assumed it was a colloquialism of the time and was charmed by it.
“I knew I was looking at the most man in the world.” I mean, even when Forrest is SHOT in his enemy’s MIDST; does he fall out of his saddle?; but no, he rides out of there; like Dilsey said, he endures! 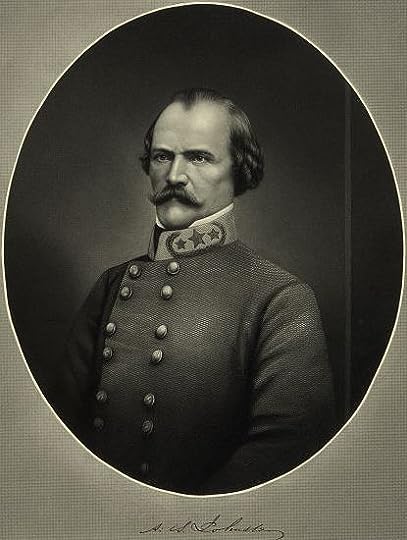 Johnston was the only Four Star General to be killed in the Civil War. It is possible Johnston was hit by friendly fire. He led from the front.

A ball clipped an artery behind his knee. Application of a tourniquet would have saved his life. Ironically, Johnston had a tourniquet in his pocket. 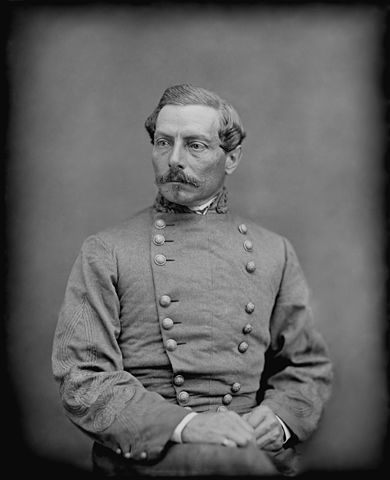 From WIKI Following a brief appointment as superintendent at West Point in 1861, and after the South seceded, he resigned from the United States Army and became the first brigadier general in the Confederate States Army. He commanded the defenses of Charleston, South Carolina, at the start of the Civil War at Fort Sumter on April 12, 1861. Three months later he won the First Battle of Bull Run near Manassas, Virginia.

Beauregard commanded armies in the Western Theater, including at the Battle of Shiloh in Tennessee, and the Siege of Corinth in northern Mississippi. He returned to Charleston and defended it in 1863 from repeated naval and land attacks by Union forces. His greatest achievement was saving the important industrial city of Petersburg, Virginia, in June 1864, and thus the nearby Confederate capital of Richmond, from assaults by overwhelmingly superior Union Army forces.

His influence over Confederate strategy was lessened by his poor professional relationships with President Jefferson Davis and other senior generals and officials. In April 1865, Beauregard and his commander, General Joseph E. Johnston, convinced Davis and the remaining cabinet members that the war needed to end. Johnston surrendered most of the remaining armies of the Confederacy, including Beauregard and his men, to Major General William Tecumseh Sherman.

Following his military career, Beauregard returned to Louisiana, where he advocated black civil rights and black suffrage, served as a railroad executive, and became wealthy as a promoter of the Louisiana Lottery.

Mod
Great pics and mini-bios of those two. Johnston was described as a handsome man, you can see that here.

Thanks for sharing those pics, Lawyer. That's a real shame about Johnston and that tourniquet. I'm assuming that this sort of unfortunate occurrence happened a lot more than it should have out on the battlefield.

Mod
I just finished my second reading of this magnificent novel and enjoyed it even more this time around than I did the first time.

Full disclosure: My great-great grandfather fought in this battle with the 18th Wisconsin. I would really like to know who they served under and where they were on the battlefield.

Mod
I'm sure that info is just a few clicks away, Tom.

Mod
Tom wrote: "I just finished my second reading of this magnificent novel and enjoyed it even more this time around than I did the first time.

Full disclosure: My great-great grandfather fought in this battle ..."

Here you go, Tom. From the Library of Congress. "Wisconsin at Shiloh, Shiloh Monument Commission, 1909. https://archive.org/details/wisconsin...

Mod
Diane wrote: "Great pics and mini-bios of those two. Johnston was described as a handsome man, you can see that here."

Thanks, Diane. I hope to upload additional images of the main officers involved. The photo html works sometimes and sometimes not.

Fascinating. So the regiment was under Prentiss on the extreme left flank with no one to the left of them but the rebs. They ended up fighting in the Hornet's Nest. 40 were killed, almost 100 were wounded and 174 were taken prisoner, yet Company K suffered only three men injured. It makes me think that maybe they had been sent out to get coffee.

Braxton Bragg 1817-1876
Braxton Bragg and Confederate Defeat: Volume 1 by Grady McWhiney says it all. Bragg was among the worst of generals. 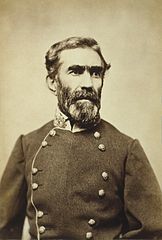 Mod
From what I've read, Bragg screwed up in almost every battle he fought.

Mod
Maybe that's why the U.S. government named a military base after him.

Mod
Diane wrote: "From what I've read, Bragg screwed up in almost every battle he fought."
Bragg did win at Chickamauga. BUT, only because James Longstreet was on the field with two divisions. Otherwise, battles under his leadership were inconsequential or were defeats.

Mod
Tom wrote: "Maybe that's why the U.S. government named a military base after him."

Lawyer wrote: "Diane wrote: "From what I've read, Bragg screwed up in almost every battle he fought."
Bragg did win at Chickamauga. BUT, only because James Longstreet was on the field with two divisions. Otherwis..."