Murder Was the Least of His Crimes…

The truth behind the twisted crimes that inspired the films Psycho, The Texas Chain Saw Massacre, and The Silence of the Lambs…

The year is 1957. Photographs would show him across the country: a slight, Midwestern man with a twisted little smile, a man who had lived for ten years in his own world of murder and depravity.

Here is the grisly true story of Ed Gein, the killer whose fiendish fantasies inspired Alfred Hitchcock's “Psycho”—the mild-mannered farmhand bound to his domineering mother, driven into a series of gruesome and bizarre acts beyond all imagining. In chilling detail, Deviant explores the incredible career of one of the most twisted madmen in the annals of American crime—and how he turned a small Wisconsin farmhouse into his own private playground of ghoulishness and blood.

Mod
Hello everyone. I hope you'll join me in reading and this discussing this hair raising, gruesome story of horror in a small town.

Mod
A picture of the Gein house taken during the police investigation. 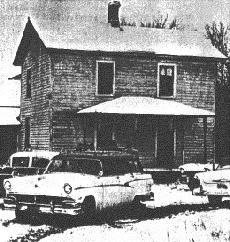 Mod
Is anyone else reading or going to read this book? It's horrific. Here's a list of movies made with Mr. Gein in mind.

I had a friend who use to vacation in the general area when Ed Gein committed his crimes. She said that the people around there would go completely silent whenever the topic was brought up.

Recently I was visiting Wisconsin on a business trip. One of the employees of my client had a button pinned to her wall: Wisconsin: Home to Ed Gein, Jeffery Dahmer and Scott Walker. I was kind of glad I was alone when I saw that button. It took me a minute or two to regain my professional detachment.

I will be reading this for February.

I've lived in a small rural town all my adult life and I can certainly imagine people ignoring signs of mental illness just thinking "that's just the way he is."

Mod
A very disturbing read that gets worse as it goes along. And to think that's it's true.

Mod
Spoilers in my review. I would have given 3-1/2 stars but instead of downgrading to 3 I went up to 4.

Mod
It's frightening to know that some people who commit such terrible atrocities on other people don't even realize what they've done is soooooo very wrong.