This topic is about Treyton
12 views
Excerpts > TREYTON Exclusive Excerpt 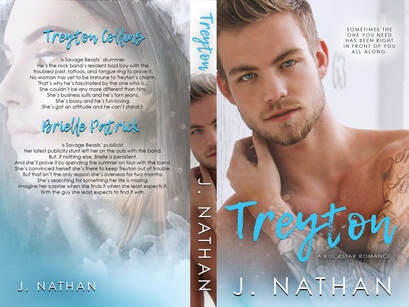 Trey jolted up in his seat and strained to hear something. “Listen.”
“What?”
“I love this song.”
I listened, recognizing Cankor’s most popular rock ballad, “Symphony.” “Then why aren’t you watching their set?”
He stood and extended his hand out to me. “I needed someone to dance with.”
I stared at his hand, wondering how he always just knew the right thing to say. But I wasn’t one of the groupies who’d do anything he asked. “I’m not dancing.”
“Scared?”
My eyes lifted to his. “Of what?”
His cocky smirk slipped into place. “I think you know.”
There was one thing I did know for sure. Dancing with Trey was a bad idea. I knew it with every fiber of my being. I was in a relationship—a rapidly deteriorating relationship, but a relationship nonetheless. I was lonely. And I was starved for any kind of attention. Those combined made for some serious lapses in judgment.
I reached out my hand. Trey grasped hold of it. His grip was warm and strong as it closed over mine. A tremor rushed up my arm.
Dammit.
He yanked my hand, jerking me to my feet.
I laughed, not expecting him to be so strong.
He smiled down at me.
“What are you smiling at?” I asked.
“You never laugh.”
I considered what he said and realized he was right. “I don’t usually have a reason to.”
His lips twisted regrettably as he gently pulled me into him. He slipped his other hand around to my lower back. The motion left a trail of numbness in its wake, and I hated that I needed the contact more than I realized. I didn’t know what to do. Where to look. What to say.
Trey moved us to the song playing in the distance.
I rested my cheek against his shoulder. Was this really happening? Were Trey and I really dancing in a parking lot? His woodsy scent consumed every one of my breaths as I felt myself slowly getting lost in his embrace. He was built, sexy as hell, and he held me like he wanted me in his arms. And I had no idea what to do with that notion.
The soft sound of his humming filled my ears as we moved to the music. I hadn’t been in anyone’s arms but Keith’s in over a year. This felt different. Forbidden. Risky.
“You still with your man?” Trey asked, his raspy voice sending a tremble through me.
I wondered if he felt the speeding of my heart. “Not sure.”
“Why’s that?”
“He saw some pictures Aubrey posted.”
“He’s not happy?”
“He’s not happy I was happy,” I explained.
He scoffed.
“Well, he’s not gonna ruin my fun or tell me what I can do.”
“That’s the Brie I know.”
“Is it? Because I’m starting not to know who she is anymore.”

Yes..this sounds perfect! Love a rockstar romance so much..will be sure to read this one!

I just realized this is the next book after Kosart..I'm definitely excited to read it even more now!