The trailer for Morbius dropped this morning.

For those unaware, Dr. Michael Morbius is a Marvel character who becomes a pseudo-vampire when his attempts to cure his blood disease go a bit wrong. He’s originally a Spider-man villain who later became an anti-hero, which is why this is a Sony movie and not a Disney one.

That said, the deal Sony and Disney worked out is clearly in full force here because we get a glimpse of a Spider-man picture with the graffiti “murderer” spray-painted across it, an allusion to the credits scene from last year’s Spider-Man: Far From Home. But even more significantly, we see (view spoiler)[Michael Keaton, aka The Vulture, from Spider-Man: Homecoming! (hide spoiler)] That makes this a true crossover.

I wonder if they’ll fold Venom and Blade into this movie too? Venom is a Sony flick while Blade is a Disney property, but this looks like they’re seriously cooperating for these films.

Damn. I thought it was called "Moebius". 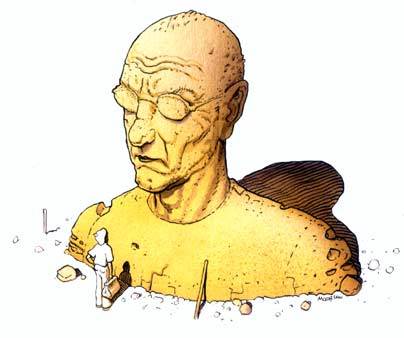 "A tortured, but hunky guy with long hair. Needs to take a Big Chance Or Else. Pretty Woman worries about him. He does Something Dark and... now he's a Hunky Tortured Guy with great abs and a Dark Secret He Must Hide."

I guess Jared Leto wasn't happy with DC after his role as the Joker in Suicide Squad.