Date of Birth: He was born the 12th of Frostfall.

Sexuality: Bisexual, though he isn't particularly into romance. He'd consider it, as long as it doesn't interfere with his life.

Affiliation: He's a part of the Thieve's Guild and the Dark Brotherhood. Despite the difference between the two, he can keep them separated and himself a different person between them.

Rank: He's one of the top thieves and one of the best assassins, but he keeps to himself and is really a free-range mercenary more than anything.

Abilities/Powers: He has the same abilities as any Dunmer. Strength, intelligence, speed. He has a good skill in alchemy (82), lockpicking (100), pickpocketing (90), sneaking (100), and the normal thief skills. He is skilled with duel wielding one handed daggers or swords (50), and can use archery (32) if he needs to. However, he never put much faith in magic and only has a little skill in Illusion magic (23). 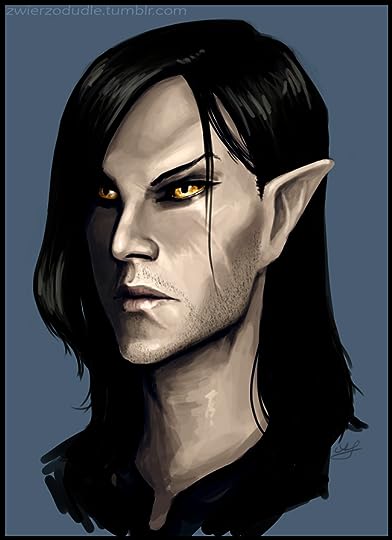 Description: Sindrius is tall at 5вЂ™9, which comes with being a Dunmer. He's lean and scrawny with lean muscles, long legs. He has the dark ash gray skin, long ink black hair with stubble along his jaw. Sharp eyebrow, beautiful golden eyes. He has two faint scars on his cheek, a broader scar on his bottom lip, and a long scar on his right shoulder. He often dresses in all black, his own signature, not wearing clothes from either of his guilds.

Personality: Sindrius is a loner with workaholic tendencies. He keeps his head down, and he'll do any work as long as it involves a heavy bag of septims. He has his own moral code, and he lives by it, with assassination and theft being in the gray area. He's stubborn and tough, and won't die without a fight. He isn't friendly to many people, and quickly decides if he likes you or not. If he doesn't, watch your back, if he does, he'll fight at your side with utmost loyalty, though he won't make a big deal out of it. He likes to act like nothing matters to him, like nothing bothers him, but he's softer on the inside. He also is kind to children, he'd never harm them. He can be bitter, sarcastic, and strong willed. Really he's a tough person to be around but he does have a good side. He's also brutally honest, but can tell a good lie when he must.

Weapon of Choice: He knows how to use a bow but he prefers his two twin daggers, or if he must a one handed sword.

Strengths: He's fast and agile, graceful on his feet with elf-like movement. He also has a vast knowledge of alchemy, mostly to do with poisons. Sindrius has also been taught as a sneak, and he's fairly good at lockpicking and pickpocketing. HeвЂ™s also extremely strong and intelligent, like most dunmer.

Dislikes: Bureaucrats, highborns, stuck up people, people who have opinions, people who bother him, Stormcloaks, Imperials.

History: Sindrius was born to a Dunmer maiden and a Dunmer from a noble household, named after his father, fourth of his name. His father blew off his mother so he was raised by her alone, in a tavern in Solstheim. He always had good people around him, his own kind, refugees from the red mountain that, instead of going to Skyrim, came to Solstheim. There was an elderly Dunmer who Sindrius looked to as a father. He was the one who gave Sindrius his first drink of ale and mead, and he taught Sindrius alchemy and how to fight with daggers. Sindrius loved that man as much as he loved his own mother. However, one night he returned from a trip with some friends to find the tavern burning, ash spawns roaming among the burned bodies. Sindrius lost it, and by dawn they were all slaughtered. He found the bodies of his mother and the elderly dunmer, and it changed him forever. At that time he was fifteen. He moved to Skyrim, where he learned his craft of thievery and assassination by falling in with the Thieves Guild and the Dark Brotherhood. When he joined them he was a nobody, a scrawny Dunmer kid with limbs too long, clumsy and uncoordinated whoвЂ™d had luck with killing ash spawns because he was having an adrenaline rush from his home being burnt to the ground. But in time, he proved to have a skill for all things that happen in shadow. He made his own moral code, one that promised kids would never be hurt, but anyone else was free game if he had a contract or a job on them. He bought a home in Riften and a home in Falkreath, and he stays in inns everywhere else. He hasnвЂ™t been back to Soltheim since he left, and while he canвЂ™t say he enjoys the cold mountainous Skyrim, itвЂ™s not the worst place he could be. He keeps to himself, travels, acts as a mercenary while taking out contracts and jobs from his guilds. He has a couple of scars from fighting, usually fights in bars. He tends to say things that piss people off.

Place of Birth: He was born in Solstheim.

Relationships: None. He had a couple maidens who had interest in him, but he wasnвЂ™t interested in them. He hasnвЂ™t really found anyone he finds worthy enough for his attention. Other than his deceased mother and the elderly dunmer, he has no one. His father still lives in Solstheim but they donвЂ™t talk.