Mod
This topic is open for discussion of The Lost Hero by Rick Riordan. 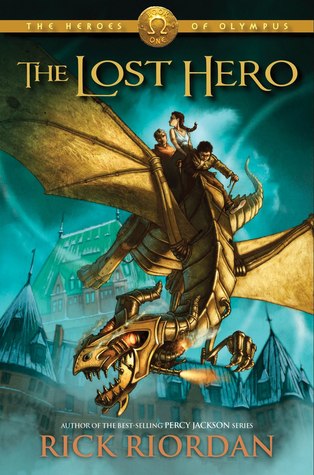 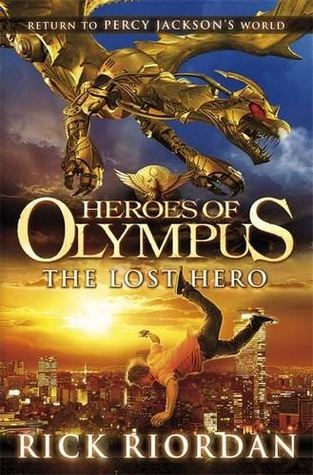 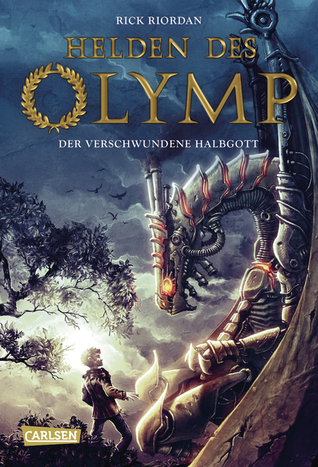 Book Synopsis:
Jason has a problem.
He doesn't remember anything before waking up on a school bus holding hands with a girl. Apparently he has a girlfriend named Piper. His best friend is a kid named Leo, and they're all students in the Wilderness School, a boarding school for "bad kids", as Leo puts it. What he did to end up here, Jason has no idea—except that everything seems very wrong.

Piper has a secret.
Her father, a famous actor, has been missing for three days, and her vivid nightmares reveal that he's in terrible danger. Now her boyfriend doesn't recognize her, and when a freak storm and strange creatures attack during a school field trip, she, Jason, and Leo are whisked away to someplace called Camp Half-Blood. What is going on?

Leo has a way with tools.
His new cabin at Camp Half-Blood is filled with them. Seriously, the place beats Wilderness School hands down, with its weapons training, monsters, and fine-looking girls. What's troubling is the curse everyone keeps talking about, and that a camper's gone missing. Weirdest of all, his bunkmates insist they are all—including Leo—related to a god.

I'm in, if I can get the library book. I am put on hold, but it should be for that long.

If you don't mind, I'd like to join in. I'll be listening to it on audiobook so I'll be a little slow (16 hours I think!)

I want to join is as well. I think they were aiming for this Tuesday.

I've already read the first two in the series, but if you continue on I'll probably join you when you get to The Mark of Athena.

Yay!! Rebecca NJ I'll be listening to the audiobook too!

Is Tuesday November 11th good for everyone?

If not we can wait a little. I may start on Tuesday because it's a library check out but I can wait for the discussion

If not we can wait a little. I may start on Tuesday because it's a library check out but I can wait for the discussion

Next week will be fine for me.

yay! sorry i didn't reply sooner on the other thread. I can start this one a little earlier, since the other book i'm reading, i kinda over read >_<

RebeccaS wrote: "If not we can wait a little. I may start on Tuesday because it's a library check out but I can wait for the discussion"

I can read this on Tuesday...I'm getting it Tuesday. Are we doing this formally or informally?

I think it's an informal one? Unless anyone wants to write questions :)

Alright I'll load this one onto my iPod this weekend! Can't wait!

RebeccaS wrote: "I think it's an informal one? Unless anyone wants to write questions :)

Alright I'll load this one onto my iPod this weekend! Can't wait!"

Well first we need to decide how many chapters we're doing per day. I might do the questions, if someone else wants to do some as well.

Yesssss. Which is why I want someone to agree to do questions with me. (I don't have time to write questions for the whole book.)

Are you sure? I think the questions only get more points when it is a BOM (book of the month).

RebeccaS wrote: "I think the questions only get more points when it is a BOM (book of the month)."

Yep. Points for questions are only in BOMs.
You can use questions here to help you with book chat.

Someone told me that if we make it a formal buddy read then it'll get points. But we have to have a schedule and stuff.

Check this link...the mods answered me.

❀Tea❀ wrote: "RebeccaS wrote: "I think the questions only get more points when it is a BOM (book of the month)."

Yep. Points for questions are only in BOMs.
You can use questions here to help you with book chat."

oh, someone in this link https://www.goodreads.com/topic/show/... told me diff.

I just asked the question in the TT3 questions thread. I'll see what a mod has to say there.

Joi wrote: "oh, someone in this link https://www.goodreads.com/topic/show/... told me diff. "

If you mean this:
Moderators of NBRC wrote: "This has been set up as an "Informal" buddy read, but if you want to do Discussion Questions then just split the book into sections and ask for volunteers to write DQs for the days
It doesn't say you get points. It only says you can discuss book with questions even if we said it informal.
If you check rules, points for DQ are only mentioned in BOM part. BR has only one 'type' of points.

It's not a big deal...I was just wondering if it was worth doing questions or not.

Joi wrote: "It's not a big deal...I was just wondering if it was worth doing questions or not."

Well, questions does make discussion 'more serious'. And help you all be more-less on the same part because there is schedule. With informal, everyone reads in their own speed, so one is on chapter 2 and other one is finishing book.

You can find here explanation of different types of BRs and use what you like the most.

I am open to doing either way, scheduled or not. Whatever you all are more comfortable with!

I am open to doing either way, scheduled or not. Whatever you all are more comfortable with!

I am open to doing either way, scheduled or not. Whatever you all are more comfortable with!"

Well, if we're not getting any points for it ....it doesn't matter

OH! OH! Sign me up for this one! I JUST finished Percy and the Olympians and planned to start this one next anyways. XD

Even if there's no points as a buddy read for this, we should get points based on how thick it is! if it's 553 pages long that puts it aaaat 50 Points for TT3, were a Buddy Read is only at 30, so 20 more points, plus added bonus of chatting about the book with others! :3

I think there is some point confusion going on here. lol If you read this book and discuss as a buddy read, you get the book points (50) for pages and the buddy read points (30), as long as it is discussed with someone that is not on your TT team. The only points you can not get are the DQ points. Those are exclusively for BOMs.

Yeah we get points for the BR on top of the page points. That's 80 points woohoo!

So we're gonna plan to start this one on Tuesday November 11th.

Ooooh, I though the Buddy Read Points were all we got for buddy reads :o still, points for all! X3

When does this start?

Thanks. I got my book today which is why I was wondering.

I'm not sure how many pages I'll read today since I'm listening to the audiobook. I'm just starting chapter 3.

I've read The Lost Hero but if you continue the series, I'd like to join in with the second book.

I'm still waiting for the library book. I hope it comes in soon.

Luckily it's a pretty long book. But if we finish before you get a chance to read, I'll definitely still discuss it with you!

I will be starting tonight while I'm at work.!

Read through the end of Chapter 3

(view spoiler)[Ahh we are introduced to our new main characters. Leo, Jason, and Piper. I love the way the book starts, just dumping Jason into this situation where crazy stuff is happening. Monsters and demi-Gods and new friends. Also I love love the descriptions of the camp. It makes me wish I could jump in and be one of these fun characters. I can't wait to read more in this imaginative series. (hide spoiler)]

Read through the end of Chapter 4

I agree RebeccaS. You are listening to this on audio - did you listen to the Percy Jackson series as well? I was a little concerned that there was a different narrator for this one because I thought that Jesse Bernstein did great voices. So far Joshua Swanson is doing a pretty good job narrating.

(view spoiler)[I love how the book just hits the ground running. Right now, Piper seems to be my favorite. She is just taking it all in but yet so confused about everything. And the anticipation of seeing which god is your parent. I am glad we get to see some of his previous characters - mainly Annabelle. I've never been much of a camp person but I think I would love to hang out in Camp Half-Blood. (hide spoiler)]

Yep, I listened to that whole series on audio as well and really liked the author. I think the voices are pretty similar which is really nice.

My favorite characters are Piper and I Clovis cracked me up! (view spoiler)[ I think if I were at camp, I might be in Hypnos cabin, because I'm always tired. Though if I had my pick, I'd definitely want to be in another cabin. (hide spoiler)]

Read through the end of Chapter 10

Ooh some things are revealed!!

(view spoiler)[ I wasn't at all surprised that Jason is the son of Zeus. Maybe that's why Hera took away his memory. Isn't Hera supposed to be Zeus's wife? She probably really hates any demi-god children of Zeus' since she is the god of marriage. I wonder if she's setting a trap for Jason and really wants him killed?

I AM totally surprised that Piper is the daughter of Aphrodite. It's interesting that children of the same god can be so different. Now that I know, it makes so much sense that she could get people in her past to just give her things. (hide spoiler)]

Read through the end of Chapter 9

(view spoiler)[I particularly liked the scene with Chiron and Jason. And I really want a mosquito machine. Well, one that works! (hide spoiler)]

So I've just read through the end of chapter 31

So much action, just the way I love this series. (view spoiler)[ What does anyone think about all these historical/mythical people coming back from the dead. I wonder who their "patron" is that is bringing them all back to help her. The dirt lady? I have no idea, but I'm very excited to find out. I hope they can save Piper's dad too. (hide spoiler)]