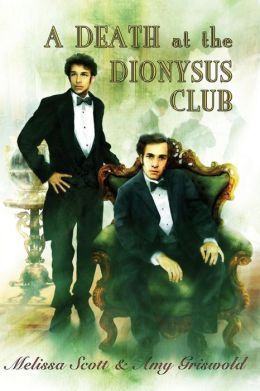 In the sequel to Lambda Literary Award-winning Death by Silver, metaphysician Ned Mathey and private detective Julian Lynes again challenge magical and murderous threats in a Victorian London not quite the city in our history books.
Mathey is recruited by Scotland Yard to assist the new Metaphysical Crimes Squad in the case of a literally heartless corpse. Mathey soon discovers that the magic used to rob the man of his heart and life does not conform to the laws of modern metaphysics-and then a second victim turns up.

Meanwhile, a minor poet hires Lynes to track down and stop the blackmailer threatening to reveal him as the pseudonymous author of popular romances. When another target of the same blackmailer, a friend of Mathey's assistant Miss Frost, appeals for aid, Lynes and Mathey begin to suspect murders and blackmail are connected.

Digging deep into the clandestine worlds of lawless antique magic and the gay demimonde, Mathey and Lynes must uncover the source and nature of a heart-stealing supernatural creature before it can kill them too, even as they face the scandal of exposing themselves as sodomites in order to close the case.


Truth in advertising requires that I divulge that there actually is not a death at the Dionysus Club at all. There is a "molly club" known as the Dionysus Club (frequented by one of our MCs, Julian Lynes); and there are also deaths aplenty (assuming you don't require Jack the Ripper numbers), BUT, there actually isn't a death at the club. The club and the death(s) never actually overlap, except as a starting point for a series of rather unique deaths, as well as to show us in a delicately explicit way that, even in Victoria's era, grown-up boys did, in fact, continue to be boys in true m/m fashion.

To the story. The time is a few months subsequent to the meet-and-greet that occurred between Lynes and Mathey in the first novel (Death by Silver.) Julian (Lynes) is hosting a bemused Ned (Mathey) at one of his clubs, said Club Dionysus. After a glossed-over look at the Dionysian goings-on - authors Scott and Griswold are charter members of the Sean Kennedy school of eyes averted during actual acts of sexual congress - our lads (literally) bump into an extremely intoxicated and frightened fellow member of the club, one Charles (Dolly) Hall. Dolly is quickly bundled into a cab babbling about something metaphysical getting "out of hand" because "he" isn't being sensible, and things are going to turn into an "utter disaster." Exit Dolly from the club and, subsequently, life itself. It seems that next morning his seemingly undisturbed body is discovered in his bed, cold and dead, dead, dead. An autopsy discovers that somehow Dolly's heart has been removed without any physical evidence of how said removal has been accomplished.

Mathey has accepted a continuing position under Scotland Yard's Inspector Hatton (met first in Silver) as metaphysician to their newly-minted Metaphysical Crimes Squad. Ned quickly deduces (as, to be fair, does Inspector Hatton) that evil metaphysical things are afoot. This is only the first of several identically perplexing deaths, and that's really all the plot, along with the secondary blackmail scheme, you need to know. The true meat of this novel lies in our continuing discoveries about the pasts of both Lynes and Mathey, as well as whether their relationship is going to actually go anywhere, or just turn into another of les affaires du coeur that each has had in his (rather active) past.

At this point, I have to confess to a somewhat misbegotten mental conflation of the MCs of the Mathey/Lynes series with that of the somewhat similar, in MCs only, Whybourne & Griffin series. I think it's the common occupation of detective by one MC in each series, along with the other two MCs being in singularly esoteric professions. Whatever. In any case, I was extremely surprised to discover that Ned and Julian's "thing" is not nearly as steady and committed as that of Messrs. Whybourne and Griffin. I mention this only to preview what our younger readers have to look forward to as the cobwebs gather in the temporal lobes of their cerebral cortex(es), and to preview what is one of the most interesting plot points in this novel: Neither man is absolutely sure about the level of commitment of his partner. The beginning of a resolution of that worry makes for fascinating reading. Page-turner reading, in fact.

This is a long way around saying that, as excellent as Death by Silver was, this novel is far, far better. The mystery of the deaths; the presentation of the problems of being gay in England in the late 19th Century; a veritable smörgasbord of wonderful secondary characters (especially the increasingly necessary Miss Frost); our wonderfully quirky MCs, of course; and a dark humor, as dry as a winter wind off the Sahara, all combine to provide a top-tier novel that I had to force myself to apportion in one or two-hour segments to keep from reading the thing in one sitting.

Ah, I didn't know there was a sequel out. Thanks for the heads up.

OK, I am still not done with this. But this series is so good! I can't help compare to A Charm of Magpies by KJ Charles which I think they are at the same level. Or to that Whyborne and whatever the name of the other is which I think is nowhere near as good as the other two. What do you guys think?

Mercedes, Whybourne and Griffin have wackier plots - but fun. I have to agree, though, that I like Mathey and Lynes a tad better. Now, if there were just MORE of them.

The Whybourne and Griffin books are my favorite. I love the Lovecraftian plots and prefer the "American" settings. Plus I find the relationship is more believable.

Kirsten wrote: "The Whyborne and Griffin books are my favorite. I love the Lovecraftian plots and prefer the "American" settings. Plus I find the relationship is more believable."

Ah, Lovecraft! Dude's plots always drove me batshit crazy; but I definitely see what you mean. As to the two relationships: you say "potato", I say "rutabaga." I feel a distinct difference in countries (and national moral expectations), length of each relationship, and each has had a similar trial by fire. Remember what's-his-face in "Threshold" who almost drove a wedge between our heroes with his great looks and description of Griffin's rather hectic activities once he had escaped his adopted parent's smalltown Kansas farm? (Like who WOULDN'T celebrate just the fact of getting the frak out of KS?).

I find both series to be page-turningly good; I just am an unrepentant Anglophile, so I like Mathey and Lynes just that tad better. But my opinions on W&G have really been just as enthusiastic. Potato,potahto. Let's call the whole thing equal, but different. Which is to say I'm not going to stop buying either series any time in the foreseeable future.

A Death at the Dionysus Club

By Melissa Scott and Amy Griswold


Ned Mathey and Julian Lynes are old school chums. They also might be in love with each other. The emotional bass line of this beautifully crafted novel is how these two men, without any support from the society around them, negotiate creating a life together. What I love most about this book is the fact that this crucial theme is rarely the overt focus of the story. It is ever-present, but delicately interwoven into the complex action that pretends to be the main point. This is Holmes and Watson with a gay back-story where the backstory is, ultimately, more important.

Period novels always make me nervous. I’m too deeply immersed in the 19th century professionally (museum curator), and have read too much Victorian literature not to be aware of writing styles and anachronisms. I was well into “A Death at the Dionysus Club” when I realized that Mesdames Scott and Griswold had managed to write another novel that didn’t push any of these buttons to spoil my simple reading pleasure.

The second piece of tremendous bravado is the fact that the authors have created a believable, vivid late Victorian London in which magic—normalized into practical parlance by the term metaphysics—is as much a part of everyday life as, say, technology is today. Without making a big fuss about it, Scott and Griswold have created a false reality that rings true, even to dividing the magical into trained and amateur, and within the profession into theoretical (metaphysicists) and practicing (metaphysicians). It is all done so matter-of-factly that it barely distracts from the building of the narrative and the characters. (I can’t help but compare this with J.K. Rowling’s fevered depiction of the separate Muggle and Magical worlds in her much-loved Harry Potter books.)

This second in the Lynes/Mathey series is richer and deeper than the first. It delights less in the presence and appearance of magic (at least until the end, which is pretty hair-raising) and focuses on the lives of two gay men in Victorian London, as they work together and try to establish the boundaries of their relationship in the context of a virulently anti-homosexual world. The painful realities of living as sodomites (their word!) is more significant, ultimately, than the use and abuse of metaphysics by the citizens, high and low, of a great metropolis.

But it is magic, in the end, that casts a brilliant, painful spotlight on what Ned and Julian mean to each other, and the discreet, low-key way in which the authors make this clear touched me deeply. Because it felt right. It felt true.

This was a deeply satisfying book to read. I look forward to seeing where Scott and Griswold will take Ned and Julian next.

I'm going to add to my review, because I was constantly comparing the Whybourne and Griffin series as I read this. Scott and Griswold's world is more believably crafted; and the tentative, painfully cautious nature of Ned and Julian's relationship (which is more committed that either of them dare admit openly) is a more accurate reflection of the time in which the books are set. I'm not saying I don't love Whybourne and Griffin--just that in terms of literature they're not quite as successful (to me).

Mercedes wrote: "OK, I am still not done with this. But this series is so good! I can't help compare to A Charm of Magpies by KJ Charles which I think they are at the same level. Or to that Whyborne and whatever..."

Ah, the Magpie books! I'd forgotten about them. Another series with a similar setting--and I really loved those, too.