Hey! Okie is my thing! *gasps*


Idea One: A young girl's parents have recently passed away. She wants to go live with her grandmother, but the grandmother lives on the other side of the forest. The girl is sent to live with her uncle, who is constantly drunk. The girl endures two months of abuse from him before running away into the forest, hoping to find her grandmother. As night falls, she finds herself completely lost, and hunted by wolves. The guardian of the forest, a boy about her age, finds the girl running from the wolves, and saves her from them. He takes her to his home to care for her, and they slowly fall in love.

Idea three definitely. That reminds me of a book I read.

Crap sorry stupid notifications weren't working. And it's a mash up of many books.

Okie, cool. Character Template or what?

Name, age, and appearance... Is that okay?

Would you like to be the girl or the boy? 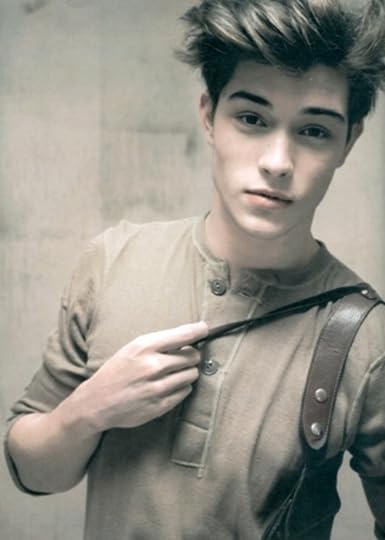 
Tylia is thrown back into her cell, unconscious. After she had learned the truth, she had to have her memory wiped again.

((Not really. I mean, I would prefer movement and speaking, but I don't really care))

Quinton was leaning against the wall, when he saw that Tylia had been placed back in her cell. Again. He covered his mouth to hide a smirk. He sat up a bit, ready to explain everything again.

Tylia starts to wake, confusion flooding her eyes. She bolts up to sitting, looking around frantically. "Where am I?!"

"Dungeon," He said inspecting his nails, an emotionless tone to his voice. The only light coming through the bars was the moon, and that just barely lit up the room. He could barely see Tylia's face, so he couldn't laugh at her odd expression this time.

"Dungeon- Dungeon?! Why the hell am I in a dungeon?!" Tylia exclaims, glancing around wildly. "And... Who the hell am I?" She adds quietly.

((Yeah, since she was sort of an important person before the uprising.))

"You're name is Tylia Pond," He answered, "Why you are here, I can't tell you." He said solemnly. "Not yet anyway, you just got back in your cell." He laughed, humor dripping from his voice.

Tylia growls under her breath, annoyed as his laughing. "What does that have to do with anything?!"

Quinton smirked softly. "A lot, trust me, I'm helping you out." His mind started to wander as he began to talk mostly to himself but loud enough. "Too bad you got put in here," He said rubbing his chin. "You would've been..." His voice trailed off as he remembered. "Is that all you need to know or am I done here?" He said waving his mistake off quickly.

"I would have been what?!" She demands, glaring into the darkness.

Quinton rolled his eyes, a small smile forming on his face as he heard the irritation in her voice rise. "Nothing nothing," He chuckled. He stood up, getting closer to her cell. "What do you remember?" He asked.

"I remember nothing. But if you know anything, you better tell me!"

Sighing, Quinton laid back against the wall of the cell. He shook his head softly. "Go to sleep, before the guards hear you. Probably in the morning?" He said, as he raised an innocent eyebrow.

Quinton winced as the thought of her not remembering him pounded in his head.

Tylia eventually falls asleep. Hours later, when the meals are dropped off for the day, Tylia starts to wake.

As daylight slowly crept through the tiny cracks in the concrete, Quinton heard the small rustle of trays being pushed sluggishly through the bars of the cell. Quinton's head shot up to glance at Tylia, studying her for the first time since she was dragged away. A tiny smile crept on his face as he saw her awake. "Mmm, it's about time. I'm guessing you slept well?" He asked, raising an eyebrow.

Tylia glared at him, fire in her eyes. "Unless you're going to tell me who the hell I am, and why I'm here, I'm not going to even... Acknowledge you!" She knew it was a lie the second she said it, for there was no one in any of the remaining cells. Annoyed at this, she turned away, towards the slop they called food.

Quinton chuckled, examining the cracks in the ceiling for the millionth time. "Good morning to you too!" He sang, wondering why his mood was so light today. "Since I'm guessing there's no way of getting you out of this... 'isolation' I'll tell you." He turned to face the cell she was in, feeling as if this were blackmail.

Tylia glanced over her shoulder at the man, the anger in her eyes gone and replaced by curiosity. He was a complete pain, but the chance to know what the heck was going on was too good to pass up.

"I'm Quinton, by the way," He smirked, knowing that he wasn't really going to tell her anything. It was to risky, but he could always hang the information over her head. Looking at her, he could tell that she really wanted to know, so this could be fun. "So, what did you want to know again?" He asked, with a condescending tone.

Tylia let out a growl, turning back around and facing the blank wall, completely silent. Insults ran though her head, and she clenched her fists angrily.

Quinton sighed, looking at the ground for a few seconds, before smiling again. He missed this more than anything, she was probably angry, but it made life brighter. "So is that all you wanted to know, or are we done here?" He repeated mockingly, wagging his finger.

Tylia growled again. "You know! Shut up!" She shouted over her shoulder, glaring. Whoever he was, he was insufferable.

"Are you always angry? I was just trying to help." Quinton retorted, pretending to cry. Slowly sauntering over to the food, he picked up the spork. Being in the prison long, you learned that if you didn't eat the food, you'd suffer. He shoved some food in his mouth, closing his eyes in agony.

Tylia hugged her knees to her chest, trying to block out the sounds of the man. She would have to give in to his foolishness sooner or later; though. He was the only one in this place, whether or not she liked it.

Quinton could tell that she was trying to ignore him, just by the way that she huddled. She really didn't understand why he couldn't tell her. But of course if he told her why he couldn't tell her, then she would try to find out more about 'who she was' 'n all of that. It's always the girls. He shook his head violently, desperately trying to determine what he should say to make her feel better, or at least like him at all. This time he was to casual about the situation.

Quinton smiled at Tylia when he saw her take a quick glimpse at him. As she turned around, his smile diminished as quickly as it had come. Quinton sighed, massaging his temples. "Listen, I'm sorry." He muttered, examining the surprisingly cracked ground.

Tylia scoffed, but it was weak. She turned and faced Quinton, staring at the floor as well. "I don't think you're sorry." She stated, frowning slightly.