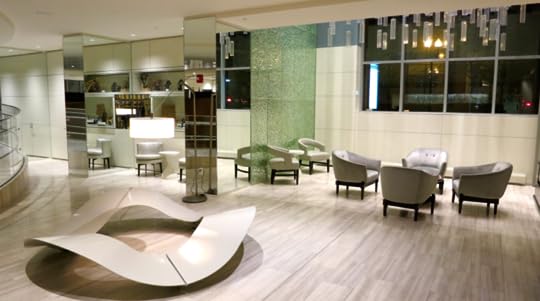 Katherine walked into the entrance of PureTalent, and was immediately overwhelmed by the extravance and fancy interior. She felt like she was dirtying the floors when she walked over to the front desk. After asking the front desk for the audition papers, she sat down and filled them out in one of the chairs.

reply | flag *
message 4: by [deleted user] (new)
Nov 08, 2014 09:18PM
Tara walked into the beautifully cheek waiting room, and smiled as she was taken back to her first time stepping into the building. She sighed and slightly shook her head. She was surprised to see that only one girl was in the waiting area. She made her way over to the girl and sat down next to her. She was here to talk about a job offer with her manager, and decided he could wait a little while.

Katherine was still looking down on her papers, until she noticed someone was sitting next to her. And not just any someone, but Tara, the famous actress whom she has always admired. Katherine was shellshocked and didn't do or say anything but stare at her perfect face.

reply | flag *
message 6: by [deleted user] (new)
Nov 08, 2014 09:50PM
Tara felt the corner of her lips slightly twitch. "Sweetie didn't your mother teach you not to stare?" She couldn't help but tease the girl, she was reminded by how she used to be when she first started out as an actress.

"Oh my god, I mean it's you. You're Tara." Katherine then blushed from realizing what a creep she was being. "I don't mean to be a creep or anything by staring at you. It just...umm...your really pretty."

reply | flag *
message 8: by [deleted user] (new)
Nov 08, 2014 09:59PM
Tara giggled and held out her hand for the girl to shake, she crossed her legs and straightened her back. "Astra Frost, actress protege. And you're here to launch your career as an actress, correct?"

"Yes," she shaked her hand and knew that it must have been obvious that she's a newbie from the way she was staring. "I'm Katherine Greene by the way, and I'm a big fan of your works." Katherine sat forward in her chair and then asked "Is this your agency?", before she process the fact that she could be seen as intruding upon her privacy.

reply | flag *
message 10: by [deleted user] (new)
Nov 08, 2014 10:16PM
Tara wasn't about to let this girl know the truth. Yes this was her agency, but letting that kind of information out in public. Crazy paparazzi. "Actually I'm here to meet a friend of mine. See I was in the position you are now."

"Oh really?" Katherine knew that she was scouted by agencies by 16, not the other way around from admittedly a little scooping around on the internet. Katherine didn't know how long she will have to wait for her big break to come, or would it ever come for her. "I really hope I could successfully get into PureTalent, probably the only decent agency I haven't tried by now." She fiddled with the strap of her cheap brown satchel bag in her lap, wanting to avoid her eyes and started. "It's been a year now since I left home in North Dakota. And I know that's not counted as a long time for an "aspiring" actress to struggle out there, but still... I don't want to be pinching for rent for the next 2, or 3 years or the rest of my life... I want to be acting. To be on set and in character, with a decent script and plot to follow. I want to be like you." She didn't know why she was telling this embarrasing baggage all to Astra, who is still a person she just met. Maybe because it's been a while since she unloaded her burdens to somebody else, or that she just finished her phone call to her family who assumed everything is okay.

reply | flag *
message 13: by [deleted user] (new)
Nov 09, 2014 04:59PM
Astra listened all the while, but she didn't feel the pull of care for the girl's story. It wasn't her fault, but every child had the same story. Struggling for their dream, waiting for it to come true. Astra let out a tired sigh and looked around the room before she stood. "Sweet Katie, if I may call you that, I mean no disrespect when I speak my next words. You are whining child. So you're going from agency to agency, searching for someone willing to take you. Why not set out on your own? Why not... make your own job? Surly if you have the talent, you could make it on your own?" Tara knew she was playing a game, one that could be bad for the publicity. But hey, she was already in the pit.

Katherine was a little taken aback from Astra's comment, but she was right. She was whining to her, and even though she was embarrased, she was still resolved in taking it upon her own hands. "Your right you know. It's just hard to take in every time that I'm rejected. Whether by the agencies, or directly from the directors, producers, or casting agents of movies, tv shows, blah blah blah." Katherine continued to fiddle with her strap in her hands but stared into Astra's eyes for an answer. "But how could I make it on my own, to be a actress, without a real production?"

reply | flag *
message 15: by [deleted user] (new)
Nov 10, 2014 12:09PM
Astra turned toward her with such a sudden movement the room seemed to gasp. "When you are this new, Every victory is a huge one. So take the small jobs and make them... Spectacular. Do your own managing. Make yourself know. I would even take a small role, but make you the star if you know what I mean." She winked even though there was no meaning behind it. But every word that Tara spoke was true.

Katherine listened to Astra's words with thought and was inspired again. She was right, if she did well in small roles and small productions, she'll have a much better chance of really making it big. "Thanks for the advice, I think I really needed it." She shyly smiled back at Astra.