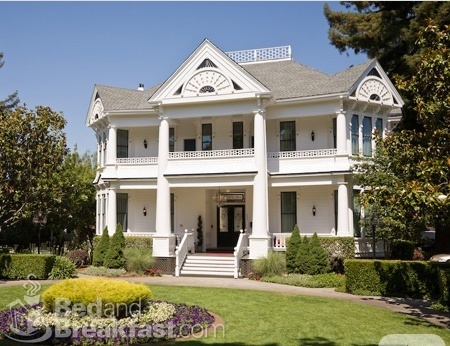 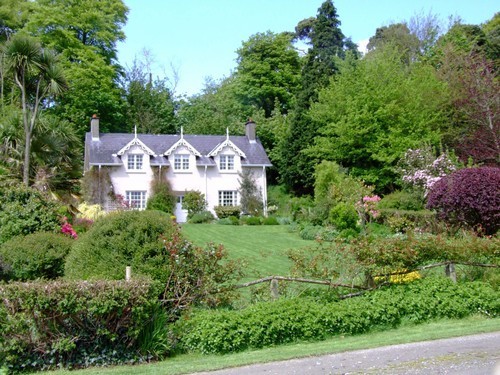 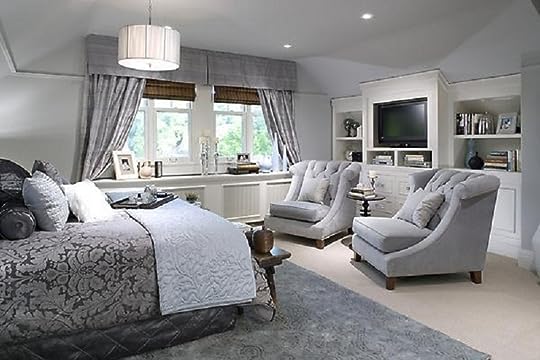 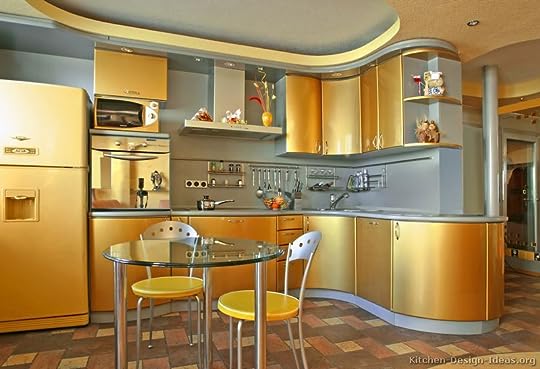 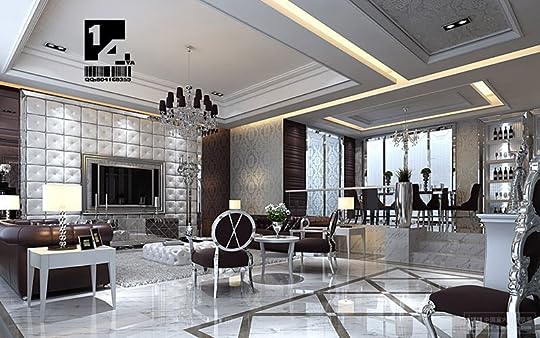 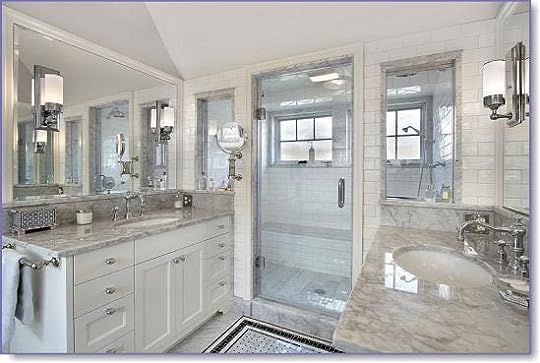 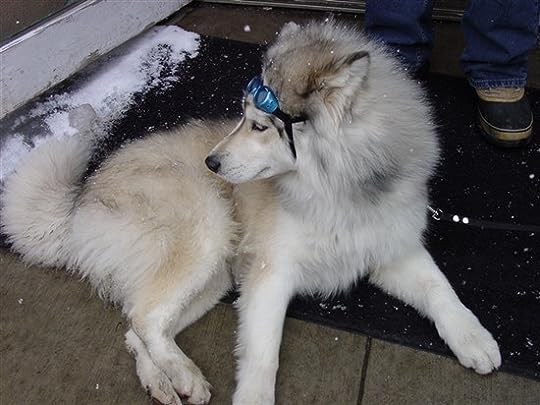 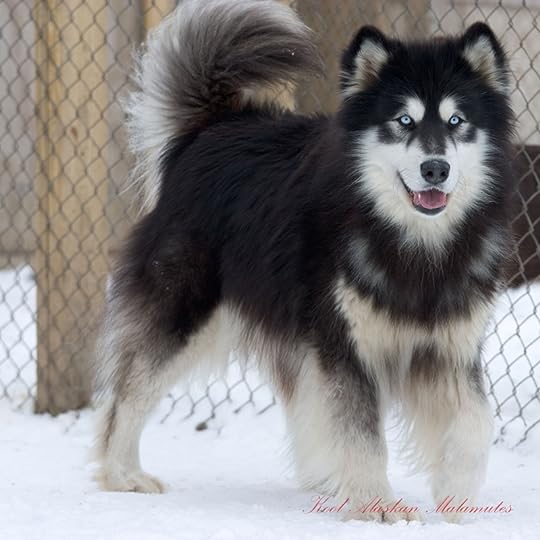 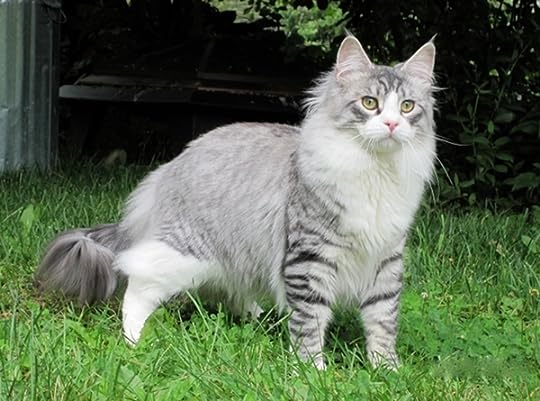 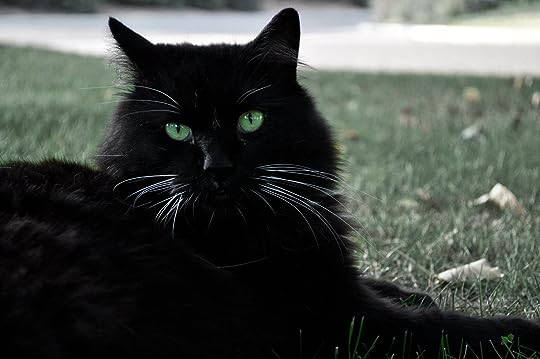 "It's not as.... grand as a lot of angels', but it works." Ramiel smiled as she walked up the walkway to the door. She typed a passcode in to unlock it and pushed the door open, smiling brightly as a light silver husky with long, fluffy fur barreled toward them. She bent down to great the animal, grinning happily.

Moloch's eyes widened upon looking at the animal. The house was huge. "What now?" He asked.

"Up to you." Ramiel shrugged, straightening. "There's a couple TVs, laptops, the dogs and a cat, um..." She shrugged again, leaving it completely up to him.

"Works for me." Ramiel shrugged, leading him down the hall to the living room. She jumped onto the couch, the dog following and resting it's head on her knee as she picked up the remote.

Moloch sits on the couch next to her and puts an arm around her.

Leaning against him, Ramiel handed him the remote with a slight smile, relaxing.

He automatically turned on the news. Then, he remembers why he does that. A bunch of pictures of familiar looking murder victims popped up on the screen. He turned off the tv quickly and handed the remote back to her. "Maybe you should pick.." He says solemnly.

Taking the remote back, Ramiel forced herself to focus on the dog's emotions instead of his. It didn't hurt as much. As she turned the tv back on and started flipping through, she could feel the dog's happiness she was home, and curiosity and suspicion of Moloch. Much easier to handle then Moloch's darkness. After a minute she found Miss Congeniality, which was the best movie ever, and curled up against him.

Moloch smiled having, of coarse, seen the movie when it first came out. Moloch held Ramiel in his arms for the whole movie. He laughed at all the right parts and acted surprised when it was supposed to be shocking. After the movie was over he continued to hold the woman in his arms. "Ramiel..?" He asked after a second.

Shifting only slightly, Ramiel stirred. "Yes?" She replied, her eyes reopening. She hadn't been asleep or anything, just comfortable and.... happy. Both unusual things for her, who was usually in almost constant pain in a violent town like this.

Was that all this was? Ramiel smiled just a fraction as she settled against him again, burrowing against him and pulling a blanket over the two of them. "It's not your fault. Besides, I've been through much worse. Trust me."

Moloch frowned. It was his fault, though. But he wasn't going to argue with her. He just held onto her for the rest of the night. He hoped she'd never make it into bed with him.. He could never control himself in those situations. Anyone was lucky if they slept with Moloch and lived to tell the tale. Moloch's eyes drifted closed as he fell asleep.

Curling up against him tighter, Ramiel trusted him enough to fall asleep as well, her head against his upper chest. She was quite content, not bothering to try and keep any senses alert or anything like that. Yes, she was screwed if he tried anything. But she knew he wouldn't try anything... He wouldn't, right?

Moloch slept soundly through the night. In the morning he stirred slightly and realized someone was on top of him. Where else would he be than his own house. Someone was in his house! He quickly rolled over onto the ground pinning the unknown person to the ground by the throat and Had begun to dig his nails into her throat before he realized where he was.

Ramiel woke when he moved, but didn't really want to move. Until it was too late. Her eyes flew open and her wings flared, tearing easily through her shirt as she stared up at him. Luckily, she realized who it was just before she used her more specific powers of hope. It was more important than most people realized, and she could drain a person of all hope with a touch, essentially leaving them a pile who was too hopeless to do anything. But she realized who it was first and simply stared at him, struggling to breath through both his touch and her slowly fading panic.

Moloch's eyes widened in realization he released her and backed away all the way to the wall. He looked at his hands. Her blood was all over them he looked to Ramiel who was bleeding at the neck. "Fuck.." He muttered not knowing what to do.

Ramiel sat bolt upright, her breath gurgling slightly in her throat with each breath. She put a hand to her bloody neck, then gave up on the already ripped shirt and just tugged it off, ripping it a bit further to press against her neck. Thank god for sports bras. She knew she wouldn't die, still being in the high angels favor, but damn it was unpleasant.

Moloch stayed back and looked at her with worried eyes. After a moment he couldn't take looking at he'd done anymore. He tried looking at his hands, but her blood was still on them, so he squeezed his eyes shut and whacked his head into the wall. A frustrated roar ripped through his throat.

Sucking in a breath, Ramiel groaned in pain, squeezing her eyes shut as she held the shirt against the wound tightly. The dog was whimpering, staring at her in concern despite the low growl in the animals throat aimed at Moloch. "No, you're fine." She shook her head, wincing. "Come here."

Moloch frowns and walks over to Ramiel. He wraps his arms around her. He didn't mean to hurt her.. He knew she'd be okay but he'd hurt her. "I.. I didn't mean to.." He practically whimpered.

"It's fine." Ramiel repeated, wincing slightly as she curled up against him. She focused on his concern and his worry, "I know, I know." She breathed, closing her eyes. She didn't seem to care about the fact she was almost completely naked on the top, just in a sports bra.

"I'm sorry.." He said while holding her to him. "I don't know how to help.." He paused for a second to pull back his long hair into a ponytail. "Is there anything I can do?"

"I know, it's ok, it's not your fault, I know." Ramiel promised, not moving away from him or pulling away even when he did. She curled up against him tightly, her breathing still making a gurgling sound that was thankfully gradually growing fainter. She focused on making him feel better, trying to distract herself from her own pain.

Moloch smiled faintly. He held her close to him. "How fast do you usually heal?" He asked, hoping she wouldn't have to like that for long.

Ramiel shrugged, closing her eyes. "It depends on the injury and a few other things. My energy level, the emotions around me.... But shouldn't be more than an hour, at the most." She smiled slightly, holding out her right hand for him to hold and resting her left one on the dog's head.

He held onto her hand trying to comfort her. "Okay.." He was glad she wouldn't be in much pain for long. "I'm sorry.. I'm just not used to waking up with somebody.." He said without thinking. Most of the people he slept with were dead by the morning.

Squeezing his hand, Ramiel smiled at him tiredly, though she didn't open her eyes. "I know." She said yet again, shying away mentally from the emotions that came with his words. From his reputation, she knew exactly what happened to people he went to bed with. And it was never good.

Moloch cuddled up against Ramiel until they were sure the wound had completely healed. "How does it feel?" He asked, still feeling bad.

Ramiel stirred, yawning slightly. "I'm just fine." She promised him, shifting and resting her head against the front of his shoulder. "I swear."

"Okay.." He said. He still felt bad for hurting her in the first place. He turned his head to kiss her.

Ramiel smiled as she tilted her head up to meet him, kissing him back softly. She was still very hesitant and unsure about it, but she didn't resist. She seemed quite happy, actually, settling against him and her eyes hovering a bit closed.

((I was checking this group for something and found this xD))