newest »
message 1: by [deleted user] (new)
Nov 03, 2014 07:08AM
Here is where you can create characters apart of the Dragon Cult. They believe that Kovos should be the world's god-king and rule over all races.

question: is it possible for a dragon to be on the resistance side? Cause I have one possible idea. 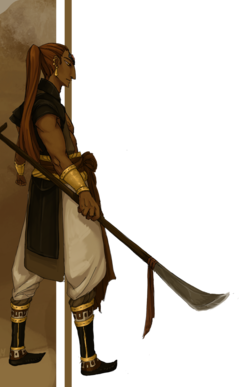 Description:
He's both a positive and dark individual, he's been called a lazy bum by some and a energetic nuthead by others. his personality is a mystery to people, it seems to switch up from time to time, nobody can really tell his motives or say they truly understand him. he can also be rude and disrespectful to almost everyone he meets because he doesn't care what they think of him and always speaks his mind. he prefers to solve his problems on his own and let others do the same with theirs. he's not the nicest and he's not the most helpful either, but he is loyal to those he considers friends. he doesn't do anything he doesn't want to do, he's his own boss and looks out for the few people he considers friends, very stubborn and acts mainly on instincts like a wild animal would. he has a complete lock on his emotions and acts based upon realistic thinking, he doesn't let his emotions get in the way of reason.

History:
Born half Gerudo and half Hyrulean, by his Gerudo mother and Hyrulean father, he was born in a lone dusty village on the outside of a desert. He lived a nice life in secret, his parents after the Gerudo would take him away or kill him if they found out a male was born. On his fifteenth birthday the village was attacked and wiped out, thanks to his training in Gerudo and Hyrulean fighting styles he survived, but was the only one to survive. He scavenged what he could and left after burying his parents, traveling for a year until he ran into someone, a dragon cultist, that recruited him. A few years later he trained harder and became the leader of their spying and information gathering organization. He also returned to his people and was announced their new king, and as his first order as king made the alliance between the Gerudo and the Dragon Cult.

Weapon(s):
The spear in the image and this sword 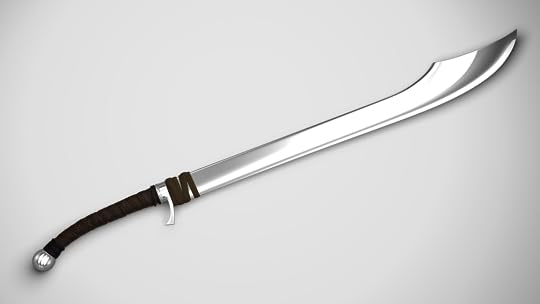 Friends: The Gerudo
Enemies: Those against his people
Family: none
Other: He is the Gerudo King

Hair: Dark blue
Eyes: They glow red.
Weight: Can float or walk at will.
Height: 30 cm.
Scent: None
Scars/Markings: None, (unlike Geru.)
Accessories: None.

Description: Dark Geru is all the evil that once abided in Geru incarnate. He is very observent, and is as twisted as Geru once was. However, he is more amused at fear and confusion. For some reason, he can never cope being without a master, much unlike Geru's original form. Upon his appearence, Geru lost all of his evil, but funnily enough, none of his magic.
Likes: Masters, provoking fear.
Dislikes: Geru, the resistance.
History: Upon his creation, a Kokiri-Twili-Imp, Geru (as a child) was filled with all types of magic. The dark interlopers that did this were eager to create a weapon powerful enough to win them the sacred realm. However, in their greed, they did not see how powerful this child was becoming. Fortunately, yet unfortunately, the child escaped and went on a bloody rampage, killing all in his path. Over the centuries, he forgot why he did this, and merely continued torturing and murder "for the fun of it". One day, however, some great force separated the dark magic from inside him. He still kept most of his abilities, but the creature that appeared from inside him was no longer bound by the goodness of Geru's heart, and it's power increased tenfold.

Weapon(s): Magic
Friends: Kovos
Enemies: The Gerudo (he wants to be Kovos' top dog.) Geru, the resistance.
Family: None
Other: N/A

Description: She is very spiteful towards her enemies. She doesn't like anyone who has different opinions to her. She also finds children annoying, and will often tell them to "Go away", or "Scamp!"
Likes: Dark Geru, Gerudo, Assassinating.
Dislikes: Conformists, people with differing opinions.
History: She used to be determined to assassinate the twilight realm's royal family, but she has shifted her efforts, and now works for Dark Geru. She has a small crush on him, although she will never let it show. Dark doesn't think much more of her than a pawn in his war-game. However, he also treats her well, not wanting to lose any good warriors. ((They met in between Geru and Dark's first encounter and when Dark summoned Kovos. He made a short trip to the twilight realm and convinced her to come over to his cause.))

Ummmm question: can I still join? I only ask because the head mod deleted their account and it looks like they're the one approving characters and stuff like that. But I was thinking about being Ghirahim, as well as an OC named Rowan, if that's okay. Hopefully I can still join. :)

Mod
((You can, but now that the main villain is deleted, there's not really much that can happen. Unless a plucky mod has the courage to take up Kovos...))

sure go ahead. with the head gone and the other mods never comment it'll make me pretty much the only mod here. as for what happens next we can all decide as a group.