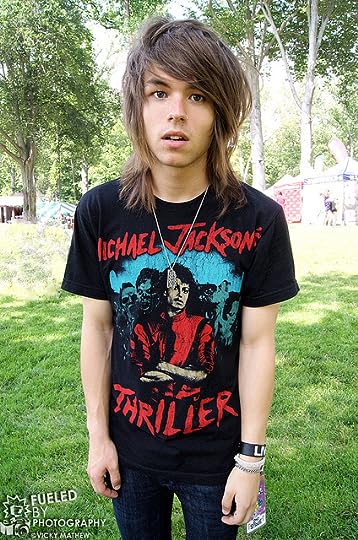 Eye Color:
Blue
Hair Color:
Brown
Complexion:
Tan
Body Type:
Athletic
History:
~ Childhood ~
Deric grew up in a small town in Northern New York, called Oak Falls. He was the middle child so he got lost in the madness of a high schooler on drugs and a baby, he was fine with that. He learned how to play guitar from his older brother before high school started and he got really good.
He met a girl in school, Gwen, who had just moved there and loved to sing, it was all she cared about and she was bullied a lot. He became friends with her and they started a band of two, she learned some guitar, but he wouldn't teach her, he wanted to play.
~ Teen Years~
He and Gwen became best friends and hung out and sang everyday, and he started to like her. But she was with her older brothers best friend, which he knew had a girl friend in school. He hated that she would get hurt by him, but he couldn't tell her. She was so happy and thought he loved her, and she truly loved him. And Deric was dying every time
she left to o see him, he thought it was dumb. Draco was three years older and Gwen was 14. Deric would make sure he wouldn't say anything against him. But he did, he said that Draco was a jerk and he would leave her. Gwen go mad and freaked out and the shortie's demon side came out. She said everything bad about Deric and when she left he wished she would've beat him up instead of saying those things.
But he was right, and Gwen broke down in school and came running to Deric, no one else cared about her.
He was happy to have her back and they started posting videos on youtube. Thinking it'd be fun, but people thought they were really good.
And now he and Gwen are dating and he is happy that they are becoming popular on YouTube.
Personality:
He is really sweet to every one, but if you get him mad he'll be really mean. Gwen and him can't get mad at each other because it ends bad and they both hate it.
He puts all of his heart into the songs he writes and cares about them a lot, and Gwen he loves Gwen. If you say anything against her he might just kill you.
Positive Traits:
- Great Singer
- Very Sweet
- Great Drawer
- Keeps secrets
- writing songs

Negative Traits:
- gets mad to easily
- over reacts
- stays by himself a lot
- Doesn't get sad, only mad
- cares about Gwen too much

Fatal Flaw:
Gets mad to easily and hurts people
Biggest Secret
He has sent Gwen to the hospital many times when they fight, and she's hurt him pretty bad to, he hates it but when he gets mad at her she fights back and they could fight for hours.
Sexuality:
Hetero
Relationship Status:
With Gwen
Crushes:
Gwen
Other:

Eye Colour:
Green
Hair Colour:
Brown
Complexion:
Pale
Body Type:
Thin
History:
~ Childhood ~
Gwen was born in Montana, but no one was her friend there, she always was bulled. Because she always sungm and she liked a girl, never watched tv or really read books. The kids in her school only cared about tv shows and sports. AN they were all jerks to her about liking girls. She was bullied about that all the time, and she tried to kill herself. She stabbed her arm, but Jared didn't let her stab her chest. She screamed at him and they next thing she knew they moved to New York where most of their family was, Gwen was bullied there at first. But she met another singer and they became best friends. Meanwhile he brother became friends with their neighbor, Draco and she fell for him, hard. He asked her out as a dare, and they went out. He didn't like her, but she was convinced he did.
Deric told her he wasn't hers, and they got into their first big fight. She yelled everything bad about Deric at him and she ended up with scars and bruises. When ever they fight now, one or both ends up in the hospital or bleeds. Draco told her to leave him alone and Gwen started dating Deric after that. They try to not fight that much, but they have to sometimes.
Personality:
Gwen is very angry all the time, years of being bullied does that to a person, but she goes to therapy to control it. She hates getting mad at Deric, she takes most of her anger out on him and she feels bad about. She loves singing and puts a lot of her anger in it instead of at Deric. She loves sweet music and she loves just locking herself in her room and writing songs.

Negative Traits:
- gets mad easily
- lets anger control her
- doesn't care what others think
- defensive
- secretive, hasn't told Deric about her suicide attempt or being bi

Fatal Flaw:
She lets her anger control her, and she doesn't get sad or upset, just angry all the time.
Biggest Secret
Attempted suicide in Montana and liked girls
Sexuality:
Bi
Relationship Status:
Dating Deric
Crushes:
Olive, Draco, Deric
Other:

Eye Colour:
green
Hair Colour:
Light brown or blonde, changes with season
Complexion:
Tan
Body Type:
Slim
History:
Logan grew up in Hollywood, but he hated the spotlight. His mom was an actress and his dad a singer in a band. He was let onto tv shows and he hated it. His best friend was a son of an actor and they promised that they would never be in movies or bands. They stopped letting their parents make them audition and were forced to take pictures instead.
When they were 15 they used what their parents made them do against them. They started sending pictures to magazines and the media, they stayed anonymous for a few months. But Logan's mom found out and he ran away from home as a disgrace to his family.
Personality:
He hates his family and trusts no one with who he truly is, he hates hollywood, so he fights them by sending in staged pictures and lies, but they are true. Ever one says they're lies. He doesn't lie, they peope he takes pictures of do. Lie to everyone, he hates liars, and he avoids music and movies that his parents have anything to do with.
He loves cats, but cant have any because he's allergic.
So he has a dog, named Terra.
Positive Traits:
- kind to most people
- Isn't lost on movies or music
- His idol isn't a fake person on a tv
- Loves animals
- Good singer (hides it)
- Good listener

Negative Traits:
- Hates his parents
- Doesn't talk about him that much
- Thinks he'll never get in trouble for running away
- Believes his parents don't care about him
- Ignores his parents all the time, he doesn't see that they miss him

Fatal Flaw:
Cut himself off from his family because of what he wants
Biggest Secret
His family is famous
Sexuality:
Homo
Relationship Status:
Single
Crushes:
None
Other: 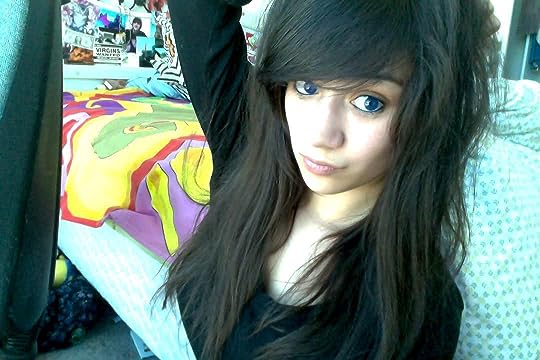 Eye Colour:
Bright blue
Hair Colour:
Black
Complexion:
Pale
Body Type:
Slim
History:
Amber grew up in Ohio and was bullied a lot, her friends all lied to her all the time and didn't like her. She didn't have any siblings to turn to, because her only one was in high school and she was a bad group of friends. Amber didn't trust Olivia with anything. When Amber got into middle school a whole bunch of new kids were there, and people started to like her. She was happy to have true friends, she thought. But they left her alone for cheer leading in high school and she met Owen, and he never lied and never left her side. She fell in love with him slowly over the years and he was falling in love with her. 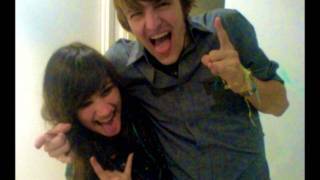 She became a publicist becasue Owen wanted to be a singer and she wanted to help him.
Personality:
Amber is very sweet and very happy all the time. No matter what the situation is she is smiling and tries to get others to be happy to, and it works. It's like she has a magical power to make happiness spread. But she hides her pain inside all the time, she doesn't show it to anyone. She has a lot of sadness and pain. But she drives herself insane when shes alone, and she hates being alone.

Positive Traits:
- Very Happy all the time
- Never mean
- Cares about her job a lot
- Has been hurt so much she won't hurt other
- Good singer

Negative Traits:
- Hides her pain
- Never shows anything but happiness to others
- Clingy to others because she hates being alone
- Can't stand being alone
- Needs to talk a lot

Fatal Flaw:
Doesn't show sadness to others and keeps it bottled inside her.
Biggest Secret
Thought about suicide as a teen
Sexuality:
Hetero
Relationship Status:
With Owen
Crushes:
Owen

Eye Colour:
Blue
Hair Colour:
Blonde
Complexion:
Tan
Body Type:
slim
History:
He and his best friend Logan grew up in Hollywood, both hated it. They promised that they would never let themselves be sucked into the spotlight.
Logan had an easier time doing that, but Ben fell in love with an actress, who was the biggest actress from being in "Dusk" (Pretty much twilight)
When he meet her see was a kind sweet girl. She was just a girl form a small town in Northern California.
Her name was Jessica Lightning, and he fell in love with her. She seemed to like him too, so they started dating.
But as she became famous she became stuck up and self absorbed. By this time Logan had run away and Ben knew why, he was starting to hate Hollywood too.
Jessica was turning meaner and ignoring him, but he knew everything about her. At the peak of her fame, she dumped him for her co star and he vanished to find Logan.
When he did Logan just let him in, knowing saying "I told you so" wouldn't help anything.
So Ben started a website about everything Jessica told him, all the truth. She was saying lies to everyone else.
She is the one that he follows most to tale pictures of for his website, but he also takes pictures of other people.
He and Logan ignore their parents all the time and ignore who they used to be.
Personality:
He loves too deeply and hates when someone leaves him.
He hates being independent fully, he wants someone to fall back on. Right now it's Logan, but he doesn't want to have someone to control him either

Negative Traits:
- Doesn't let go very well
- Hides himself from other.
- Isn't musical talented at all
- Hates people asking him about his parents
- Seeks revenge

Fatal Flaw:
Hates his past
Biggest Secret
That he is the one running the website about Jessica Lightning, only Logan knows.
Sexuality:
Hetero
Relationship Status:
Single
Crushes:
Jessica Lightning
Other:

December, were you planning on writing out Ben's personality?