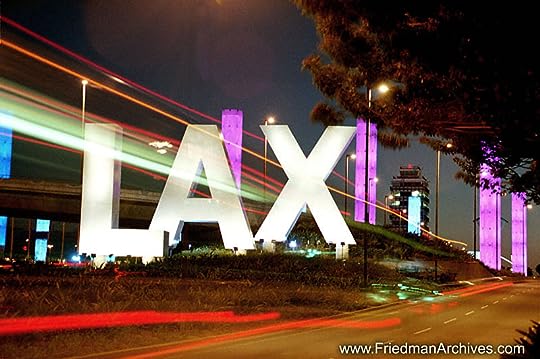 If you need to fly into or out of California, this is the place to do it

Will thought he was running behind, but being here early made him more antsy. A storm had been called in earlier this morning which meant Felix's flight was pushed back, but not by too much time. It was still four AM and he was rather grumpy and impatient with the lack of coffee in his system, as well as the hassle he'd gone through in the parking garage. All he could do now was hope the guy got here sooner then later. Checking the screen once more he stood. Felix's flight wasn't in and he had nothing to entertain himself with besides the outdated stack of newspapers beside him. Looking for the time he shrugged walking over towards a coffee vendor. Having been here before he knew the didn't have the best quality, but some caffeine was better then no caffeine.

Will ordered his coffee with his usual bright smile as he made small talk with the woman who was brewing his coffee. Known for his promptness he knew he still had time before Felix's flight arrived, but this turned out to be differently when he turned around, almost dropping his coffee in the process of walking into the taller mans chest. Cursing loudly he shook his head as scalding coffee spilled out of the loose lid, though Felix's expression was still neutral. Muttering under his breath he set his coffee down, wiping off his hands before disposing the useless cup into the garbage. "Did you get your bags yet?" He asked, turning his attention towards Felix for a moment, hiding his annoyance at the other man's silent approach.

If it had been anyone else but Felix's Will knew he'd be in a screaming match with some stranger. Sighing he took a deep breath. "No it's fine. We'll just get something on the way back." Will said, his shoulders still tensed as he looked back over at the other man. Both of them weren't known for displaying affection in public so he simply patted the man's shoulder in a greeting before silently continuing forward. Having been her plenty of times Will silently led the way to the conveyor belt where the luggage was currently being processed.

What had he done? Or more specifically who had he done? Grinning to himself he reached for the other man's luggage before handing it to him. Though they had people that did this for people like Felix, he always refused the help, which made no sense to him. "Well, why your were working on being pretty I just lazed around, organized a few things for my other clients. I even have an interview later today for a new client." He told him with a noncommittal shrug as they headed back out towards the exit.

His response was the usual and he pretended not to be bothered by the other man's silence as he continued towards the sidewalk. Instead of dealing with the crazy people in the parking lot he had a chauffer bring the car around with one quick press of a button. Turning around he noticed Felix's expression and he rose an eyebrow. "What's on your mind?" Though it wasn't his business to be all that curious Will figured that's what managers did. They had to micromanage every part of their clients life, and learn about them, and though he'd known Felix for a while he realized he knew nothing about him. It wasn't necessarily a fact that bothered him, but awkward silence simply wasn't his thing either, and there appeared to be a lot of that between the two. Opening the door he slid into the car, giving the driver money for a taxi so that he could be alone with Felix on the ride home.