The Winter Soldier was perfeeect. I'm beyond excited for this.

"I'm with you 'til the end of the line."
...
Perhaps the movie was just mostly action up to that point and that was surprising... But what the heck. It was MAGNIFICENT.
...
And I loved that movie. Not a philosophical peregrination into the mysteries of man's psyche (which could be a superhero movie but I think it ought to wait), but it was great.

Aw, lovely. What about you? The Winter Soldier's identity was hard to keep secret, mm?

I'm quite lucky that I was able to avoid all spoilers and had no idea who the Winter Soldier was before the movie :D

Theodosia of the Fathomless Hall wrote: "Aw, lovely. What about you? The Winter Soldier's identity was hard to keep secret, mm?

I loved it. Knew who the Winter Soldier was before the film even came out, though, from comic geeks. :)

Lucky Rebecca! I bet I wouldn't have even recognized him in the first few moments that he was revealed... I didn't pay much attention to appearances when we watched The First Avenger. :D.

Favorite moment??? Absolutely for me, Cap's line to the Winter Soldier. Poignancy in a box.

As with 92% of the movies in this folder, I had no idea this was happening. (There is a newspaper from 2012 on my coffee table talking about The Avengers. I am out of the loop.)

Jazzy wrote: "As with 92% of the movies in this folder, I had no idea this was happening. (There is a newspaper from 2012 on my coffee table talking about The Avengers. I am out of the loop.)" 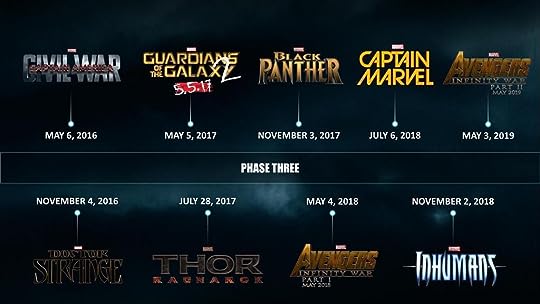 These are all the upcoming ones.

@Doctor Who Fan I have! I'm so excited for CW its going to be AMAMZING. I'm sad that Andrew isn't spidey anymore. He was my favorite so far.

What team are you? I'm team cap

I'm on team cap too

Also Team Cap. (But I still like Tony, so...) And anyone esle sure that this movie is going to hurt?

Rena wrote: "Also Team Cap. (But I still like Tony, so...) And anyone esle sure that this movie is going to hurt?"

Who saw the movie?!? Why isn't there a huge discussion of it yet? PLUS which side are you on?

I'm personally on Team Ironman even though I like Cap much better. I agree with the accords and if I was a superhero, I would sign them. I don't think that people with such great power should be able to run free. I understand how Steve feels, like he wants to help people as much as he can. But at a certain point, helping one person can lead to hurting 2. When they get that bio weapon in the beginning of Civil War, Wanda ends up blowing up part of the hospital and hurts/kills a load of people! Plus a lot of countries are willing to sign the accords, allowing the Avengers to operate in that country. There is nothing wrong with trying to keep the powerful people in check. And Also that raises another question, what counts as helping? What if people don't want help, should you help them anyway?

I really liked the movie, I was one of the best marvel movies yet. and I don't even like marvel that much (sue me, I know), but Civil War was really good and I liked how they show that, something so little can escalate into something so huge. The conflict felt pretty real, a lot realer then B Vs S at least. Who else was liked Spiderman? Tom Holland did fantastic and I'm looking forward to more of him. Plus, Sebastian Stan AM I RIGHT?

I don't care if the keeping people in powerful people in check is a good thing - they were given three days to decided if they would sign a huge document full of fine print. Who knows what is in that thing?! No way would I put my name on it when I do not fully understand what I am signing!

I see both sides of this one. But the way it is set up in the movie, I'd have to go with TeamCap.

Rivka Ray wrote: "I don't care if the keeping people in powerful people in check is a good thing - they were given three days to decided if they would sign a huge document full of fine print. Who knows what is in th..."

I wouldn't sign it until I fully understood everything that was in it of course! But Ironman said that the document could be amended, that way if they didn't agree with something, they could change it. After what happened though they wanted some assurance that the Avenger's wouldn't be allowed to just waltz anywhere they please and destroy stuff. They wanted something to be done and quickly so that there wouldn't be panic. The people needed to know that they were safe from superhumans and their whims.

This explains my thoughts on Cap's stance on the accords perfectly:

I do think the heroes should have some kind of council or someone to set rules/boundaries, but I don't think the government is the best choice. Maybe a council of heroes or people in charge of emergency response, but not a bunch of politicians. It's something that doesn't seem to have a perfect solution though.

Both sides make a lot of sense, but I'm on TeamCap.

Rivka Ray wrote: "This explains my thoughts on Cap's stance on the accords perfectly:

That's a really good view! I don't agree with it, but I see the point. It all comes down to point of view. Captain America wanted to be able to think about it, but the situation called for action NOW. Which he wasn't okay with because long, confusing documents take awhile to understand and process. I would hire a lawyer to read it and explain it to me, that way before I signed I would know which things I disagreed with and could get changed later.

Rivka Ray wrote: "This explains my thoughts on Cap's stance on the accords perfectly:

Sidney wrote: "I do think the heroes should have some kind of council or someone to set rules/boundaries, but I don't think the government is the best choice. Maybe a council of heroes or people in charge of emer..."

Yes! Politicians should not be the ones in charge. They could basically turn the avengers into an extension of the military.

But who should decide who these leaders are? Because if the super heros are in charge they will appoint someone with their agenda, which might not be best, since they believe they should have unlimited power. If politicians choose the leaders then they will probably appoint corrupt people. So who should choose these leaders?

Also, it's not just one government that will decide what the Avengers can do, the accords are HUNDREDS of governments deciding what they can do. The Avenger's won't belong to America they will belong to the world, which I think is the best way. That way people from all over can be represented, not just Americans. Before the accords, the Avengers were an American organization. And it was America who held the reigns to the most powerful people in the world. But now it is the UN, every country in the UN gets to befit from the Avengers and their power. It's no longer American's butting in and trying to solve your problems.

Was I the only one who brought their own tissue box to the cinema?

You are not. My sister brought one and was willing to share with me. I was expecting to cry more than I did. I think it was more intense with less low points for crying.

Agreed.
Quite emotional, I think I managed to cry only twice :)

But there was more action than in previous Cap movies.

I guess more action is to be expected when there are that many superheroes in one film!

Wow, there was some serious debate going on up there. Nice. Thanks for keeping it civil (ha, get it), ya'll.

reply | flag *
message 37: by [deleted user] (new)
Sep 18, 2016 11:22PM
I just watched it and it's awesome!!! It was so intense. I have only one question, what happens to his shield? At the end when Tony is telling him he's not worthy to have the shield he drops it and leaves, so what happend to it?

The real question is, when will Bucky get his backpack back?