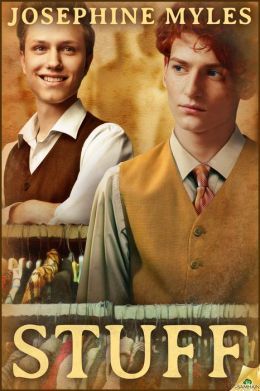 Tobias “Mas” Maslin doesn’t need much. A place of his own, weekends of clubbing, a rich boyfriend for love and support. Too bad his latest sugar daddy candidate turns out to be married with kids. Mas wants to be special, not someone’s dirty little secret.

When he loses his job and his flat on the same day, his world starts unraveling…until he stumbles across a vintage clothing shop. Now to convince the reclusive, eccentric owner he’s in dire need of a salesman.

Perry Cavendish-Fiennes set up Cabbages and Kinks solely to annoy his controlling father. Truth be told, he’d rather spend every spare moment on his true passion, art. When Mas comes flaming into his life talking nineteen to the dozen, he finds himself offering him a job and a place to live.

He should have listened to his instincts. The shop is already financially on the brink, and Mas’s flirting makes him feel things he’s never felt for a man. Yet Mas seems convinced they can make a go of it—in the shop, and together.

As is my wont, far too often, I read Stuff, the second book in Myles' "Bristol Collection" first - and I'm glad I did. I always go on reccy's by Ulysses, but Junk sounded just too heavy for my mood at that particular time of the week, and Stuff hit the spot...and lead me into reading Junk immediately after. (And it was, for me, considerably harder going. I don't know if I would have continued reading the series had I read in the correct order - and it's not necessary, as all books appear to be standalones.)

Tobias "Mas" Maslin is, on the surface, a truly good-time kind of guy. He's apparently happy being an anytime booty call for Jasper Richardson, the MC-hoarder of Junk ("Bristol Collection #1), among a plethora of other lads. I loved the character in the first novel, but I think I liked him a whole lot better because I first got to know him in my reading of Stuff. Made redundant at the posh department store he (sorta) loved working at, then caught trying to smuggle several hundred pounds' worth of perfume out the front door, Mas is behind on everyting including the rent and the utilities. And his creepy sugar daddy is married and, well, creepy.

Fortunately, of course, he stumbles into Perry (Cavendish-Fiennes') mess (literally) of a retro clothing/tchotchkes shop. Where the veddy upper-class Perry sees the store as a way of thumbing his nose at his (creepy...there's a theme here) dad, and as kinda/sorta a way of paying his bills, Mas sees gold in that thar mess.

Poor (ginger...go, Uly!) Perry. His only decent family member, his aunt, left him the store and a warehouse-load of clothing and "stuff." Unfortunately, Perry is possibly the world's worst businessman, ever, and more than mildly anthropophobic. He really can't deal with people, which makes him, of course, the world's worst shop owner.

Enter Mas, who straightens the hell out of the store, leaves Perry delightfully bent, and sets both men on the way to a HEA.

As always, Ms. Myles' secondary characters, including Jasper and Lewis from Junk, are wildly well-written, and somewhere amongst them must be the main character(s) for her third "Bristol" novel.

If you liked the first novel, you'll love the second; it's a bit lighter thematically, but the people are just as complex and fascinating.

Recommended highly. But, know your Brit slang or you'll be forever searching the Web for definitions.

I did the same--read Stuff before Junk. Reviewers were down on Junk so I waited for Stuff and was glad. The Two side characters in Junk, Brendon and Jaz appeared in the anthology, Winter Warmers.

That one goes into my TBR file right away.

BTW, I read "Stuff" first for the same reason you did.

I don't know if this "counts" as a "gay but didn't know" or "gay-for-you" tale, but if so, I think it was one of the most believable.

Averin wrote: "I don't know if this "counts" as a "gay but didn't know" or "gay-for-you" tale, but if so, I think it was one of the most believable."

Since Perry was primarily asexual/celibate before Maz, I'd say it was more "gay, but didn't know." Also agree that it was one of the most believable re "switching" sexualities.