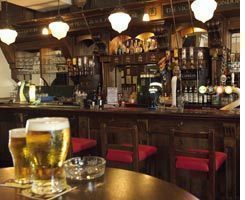 This is a rustic, Celtic pub, run by an elderly bartender, who is aligned to one of the packs. This is 5he perfect place to go if you need a drink or just someone to talk to.

The faint snaps and cracks of bones shifting drew attention to the door, as a slender black wolf grew and rearranged into a slightly tall, slender girl with long black hair. Her piercing blue eyes swept across the pub, effectively silencing all murmurs before she crossed the bar and perched on a stool, nodding at the bartender. In moments the alpha had a glass of red wine in front of her.

reply | flag *
message 3: by [deleted user] (new)
Nov 17, 2014 08:06PM
Becky Lewise stood outside the door of the pub looking in to make sure that her cousin or other pack members weren't in the pub. They loathed it went she went out like this and got drunk. I have been sober enough. She thought to herself before she stepped into the pub catching some glances from the people around her. Today she was dressed in a black jersey with a 78 on it, shorts and brown combat boots. She also had her glasses and her "You Suck" hat. With the glances she could hear the others chuckling at her. She could careless. All she wanted was to have a good time. She sat next to some chick and looked at the bartender. "Margerita please." She said making sure he could hear her. She then looked at the woman next to her. "You're new I've never seen you around before." She thought out loud.

One dak eyebrow rose as Enya looked at the girl. Ah, one of those annoying "cooler than thou" types. The other wolves stirred a bit uneasily as the Alpha turned slowly to face the newcomer. They were well aware of her reputation. Sure she preferred to have her pack do the fighting to keep her hands clean, but she was perfectly capable and willing of dealing mass damage on her own. Her tone was coolly polite as she responded, "I am the Dark Moon Alpha." As she brushed a piece of lint off of her black blazer, which matched well with the white tanktop underneath and the black skinny jeans. She was a lot more put together than most of the others, not just in the pub but it general. Her precise, formal class was a step up from the ragtag feralness of most of the werewolves in this place.

reply | flag *
message 5: by [deleted user] (new)
Nov 18, 2014 05:49AM
"Nice to meet you. I'm sure you might know my cousin Michelle Jenkins because of our pack is the Locked Hearts." She admitted as the Margerita was placed in front of her.

"Good for her." Enya said flatly, taking a sip of her wine and staring moodily down into it as she swirled the deep red liquid around her glass slightly. This girl just kept getting worse and worse in her opinion. Anyone who tried to get a leg up by who they knew instantly went down in her eyes.

"Enya." The Alpha said, studying the girl with her icy blue eyes narrowed. Maybe there was some use for this girl after all. Sure, she'd have to make sure that the girl feared her enough to obey her. But she wasn't immediately, which could be good for Enya. "No, please stay." She purred.

Enya's gaze narrowed and sharpened on the girl. "Are you saying I'm a liar?" she said in her silky smooth purr.