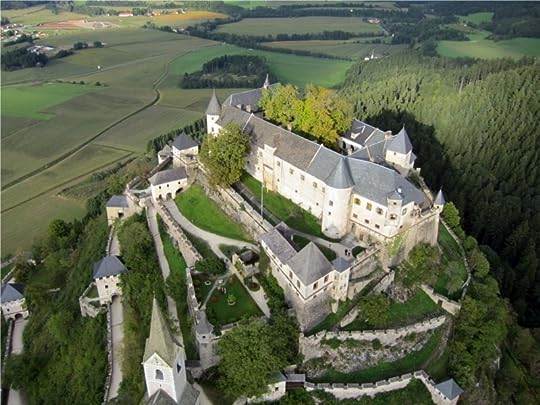 Mod
A tour of freshman made their way up the perfectly manicured walk, listening to their guide explain facts about the school with wide eyes. A wisp of purple light danced through the air, landing on bouncing off shoulders and heads, tying knots in hair and tickling people's ears, even linking locks of hair from two girl's ponytails and giggling madly when they tried to step apart. There was more than a few of them, but as long as she was above them the number of people there didn't bother her. It wasn't until she was being smacked out of the air by some kid's unsuspecting raised hand that she thought that it might have been a bad idea. Dazed for a moment she plummeted to the ground, still not noticed by any of the students watching their guide intently. She landed in a puddle with a smack, and she stood to shake off the water, but now her wings were soaking wet. With a soft curse and a glare in the other student's direction she crossed her hairs and fluttered her wings furiously, trying to dry them as fast as she- A foot hit her side and she was kicked forward, letting out a yell that probably didn't even reach most of the students ears she tried to fly off, but her wings still weren't dry enough to get her out of the mess she gotten herself in.

Mod
Near the back of the hoard of newly arriving students, the small centaur looked over the heads of almost everyone there. Jet couldn't really hear what the guide was saying, but he wasn't really paying attention either. He was more focused on the people in front of him. Most of them were humanoid, at least moreso then him. A couple heads stuck out, some he couldn't even see because they were too short, plenty were brightly coloured, natural means or otherwise. And some were, doing what? Every once in a while someone would twitch and scratch their ear, reaching up to find out a lock of hair was tied in a knot, taking one step to the left just to trip and slam their head on the person next to them after their hair had somehow become connected. He knew what that meant, and he wanted to avoid it. Fairies of any sort were generally, in a word, evil. Even the old ones, since they didn't really grow old. Still, he thought it was a little strange when a bit of time not filled with someone doing something weird passed by. He turned his eyes towards the ground and leaned over a little bit, looking for something that may have gotten knocked out of the air. Not exactly uncommon when they were just a bit bigger than the hands sending them spiraling out of the air. It was still a bit of a pain, looking for something so small, partially transparent, and most likely partially covered in mud, even when he knew what he was looking for. He passed over a small glimmer of light, having to back up when he realized just how out of place it was. He spread out his front legs enough to reach down easily and scooped up the tiny person. But, when he saw just who it was, it took just about everything in him not to drop her again. "Did Al send you here to do something or did you follow me for some reason, 'cause I wouldn't trust that you just happened to be here."

Mod
Just as she was about to get trampled by a somewhat familiar set of hooves Mai felt herself being picked up carefully and she looked up to see exactly who she was looking for. "Vercingetorix~" She said with a dizzy looking smile, trying to sound as excited as possible after just getting ran over by the group of wide-eyed new kids. She put her tiny hand against his thumb as she attempted to stand up straight in his hand, but when she just began falling forward again she through her arms around her thumb and took a deep breath, muttering quietly about how all these giants were too big to notice anything unless she played tricks on them. Flipped her glowing violet hair out of her face she glanced up at Jet, somewhat embarrassed at her current state. "Can I just stay here for a few minutes, you know, until my wings dry at least." She flitted her still damp wings, unable to lift herself even a few inches off his hand, and it was the perfect excuse to catch her breath for a few minutes as well, since she sure as hell wasn't actually going to tell him that she was terrified of getting stepped on with so many clumsy brats there were wandering around right now.

Mod
"Don't use my full name, it's weird, I've told you that before." Jet said with a sigh, one of the benefits of being at this school was supposed to be that he wouldn't have to deal with those two messing with him all the time, but one of two was there already. Only way to make the immediate situation worse was if his brother were to show up, but he knew that was incredibly unlikely. "Why? Can't you just change?" He questioned. As far as he knew, Mai could just flip over to a normal size, and she wouldn't need to fly around people's heads. More than he could do. He was already shorter than average, so when he did manage to change he was even smaller than most humans, and he was entirely off balance on two legs. Realizing just how far he'd fallen behind after just standing there, he ran to catch up and slowed once he was back where he had been before.

Mod
"At least I'm normal sized now! When I change I look even smaller!" It was true Mai's human body was tiny for a human, but she was much smaller now, even though she felt more powerful than when she was human sized. She folded her arms, succeeding at standing straight this time, but fell off balance completely when the horse butt in front of her started running to catch up with his group. Falling into the palm of his hand she contented herself with sitting cross legged with an annoyed expression. "Besides, my wings will be dry soon, and then I can ride on your head!"

Mod
"Wha- no, that doesn't make any sense, you realize that right?" Jet shook his head, keeping one eye on the group in so that he wouldn't fall behind again. He didn't get what she meant, other than maybe she was just making up an excuse to not have to change. Nobody really liked to stay in a human form if they had the choice, but it wasn't like it would be hard for her to just walk a few steps. "If your wings are dry you can fly just fine, so no riding on my head. You always pull on my hair anyway, why do you think I'd let you?"