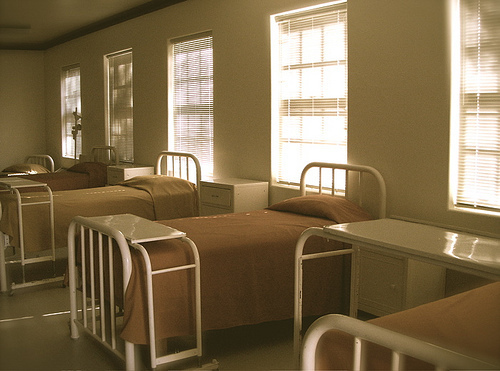 After barely making it into the school Roxie collapsed and fell back into her human form her body spent. She'd managed to get them to balcony of the Infirmary before she passed out. As she lay there naked and exhausted she hoped someone safe would find them as she fell asleep.

She stood there alone on the beach and felt his presence behind her and smiled, he made her feel safe and protected and the fear she'd clung to fell away. "Who are you?" she whispered, As always he did not answer, but his arms held her as she fell. The fear she'd felt earlier melted away as she knew he'd watch over her and she slowly fell asleep.

The sweet nymph had been fading when the man had let go of her neck. Had it helped? Would she really be able to be a better nymph from now on? And not hurt the plants? Roxie had been speaking to her... something about flying away? It was hard to tell, she felt so weak. She tried to reach out to her friend, arm moving slowly before she saw a burst of flames and blacked out.

She came to again but instead of the forest earth, she was met with hard concrete. Opening her eyes, she could make out the infirmary beds through the window. Had... Roxie flown both of them here? Even with her injury? The poor thing! Fawn felt like hell. She was delicate to begin with, but not even being able to help with their escape felt shameful. She lolled her head over to look at her poor companion. The bennu was unconscious and naked, hopefully not freezing in the cold night air... especially with the blood loss. Fawn needed to do something. Everything hurt... how much blood had he taken? Shaking, the girl's twiggish arms reached out, pulling her closer to the door. Fingers just barely reaching the glass, she scratched, hoping to make enough of a sound to catch the person's attention.
"H-h-help." Her dry, whispy voice attempted, but it was no use. She noted a small potted plant sitting on a table next to an occupied bed, Concentrating, she made the flowers grow, vine, reach towards the door. The sprout almost was able to reach, but the weight imbalance caused the pot to tumble and shatter on the floor. The student occupying the bed hopped up, completely startled. Glancing down, he looked with confusion at the odd plant that appeared to be growing towards the door. And then he saw the handreaching out followed by two bloody bodies, one was even naked! He called for help, rushing to the nurse's office.

This had to be enough, right? Fawn fell into darkness again, unable to stay awake any longer.

When she woke again, she was in an infirmary bed and it was morning. The light shining in through the windows was comforting and she felt safe. She tried to sit up, but instantly became dizzy and had no choice but to lie down again. Was Roxie alright? Looking around, she could feel that her neck had been bandaged. Apparently she was also hooked up to some IVs to put some fluids into her system.

Roxie was asleep on a bed next to hers, also bandaged and taken care of. The little Apple smiled to herself, silently thanking her friend for saving them. If she hadn't been so strong... they both would have ended up as someone's dinner. She wondered how much vampires needed to drink anyways...

She stood wrapped in his arms, safe for now from anything that might harm her, she could hear his voice as he spoke softly to her, his breathing in her ear. He was whispering something about going back now but she did not want to go back, she felt safe and loved. "Please don't make me leave," she'd said to him, "Please let me stay with you a little longer." but Roxie cold hear someone saying her name, and she was being pulled away from him, away from their beach and back to...

Where was she? Roxie thought as she opened her eyes, the bright light was so direct and uncomfortable and she closed her eyes again quickly. Where were they, how had they gotten here, were they still alive? Roxie's mind raced at she remembered little bits and pieces of what happened. They'd been in the forest, and there was a man, and he'd scared her but Fawn hadn't been afraid at all, Why wasn't Fawn afraid, he'd tried to kill them she thought but then someone interrupted him, who was that she wondered, and how'd they get here from the clearing.

Rolling her head to the side she didn't realize how thirsty she was until she heard the croak that was her voice when she said, "Fawn, are you alright? What happened?

"Fawn, are you alright? What happened?"

"Hm? You don't remember?" She blinked, rubbing her tired eyes. She probably wasn't going to make it to class today. Actually, Fawn didn't remember much of what happened last night either and it hurt her head to try.
"I'm not too sure... we were heading back when the voice came. I think it was a vampire. He said he would help me learn to control my powers and...then... he-uh-he drank from us..." Her head throbbed and she grabbed a glass of water from the table next to her bed, body aching from the movement.
"The last thing I remember was waking up on the balcony here and trying to get help. You probably flew us over." She reasoned, laying back down in her bed. "Do you remember anything else?" She yawned, wanting to go back to sleep. The events of last night had drained her literally. Still, she was glad they were safe now.

Rolling toward her friend Roxie, smiled weakly, "I really don't remember much You wandered off and there was a fear I can not explain then a man spoke and I couldn't move. I was so afraid but I couldn't move, then all of a sudden I could but don't remember changing and I don't remember getting here." Then closing her eyes she said, "I dreamt that you told me to be calm, and I dreamt you got us help after we landed. So maybe we did fly here." As Roxie tried to get up she felt very weak and fell back into the bed. "I'm glad you are ok Fawn. I'm glad we are both OK. Let's go out again sometime, preferably without the weird man at the end of the day. She wanted to keep talking but her voice slowly faded with her ability to sit up and soon she was asleep once more.

One moment she was talking to Fawn the next she was back on the beach. The fear of what had happened completely gone, the fear of what she'd forgotten gone as well. All she felt was peace, the waves washed up on her feet, and she could feel his presence again. Closing her eyes she enjoyed the sun on her skin and stood still feeling the sensations around her. "Who are you?" She asked when she felt his presence near her once more. "Why won't you talk to me? You come to me everytime I sleep for as long as I can remember but you never talk to me, you never stay. Are you an angel, a devil, or something else entirely?" Roxie closed her eyes and felt the sun on her face and took a deep breath, she could smell him he was so close and she wondered why he always stayed just out of her sight, just out of her reach, why he never spoke.

((So you want me to start somewhere?))

((I posted her in the courtyard))