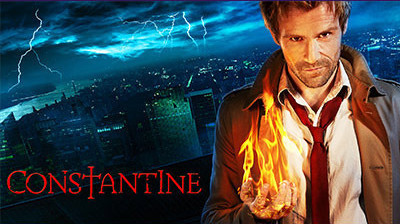 Constantine
Airs: Fri 10/9C NBC
NBC Page: http://www.nbc.com/constantine
TV.com: http://www.tv.com/shows/constantine/
Summary:
Based on the wildly popular comic book series "Hellblazer" from DC Comics, seasoned demon hunter and master of the occult John Constantine (Matt Ryan, "Criminal Minds") is armed with a ferocious knowledge of the dark arts and a wickedly naughty wit. He fights the good fight - or at least he did. With his soul already damned to hell, he's decided to abandon his campaign against evil until a series of events thrusts him back into the fray, and he'll do whatever it takes to protect the innocent. With the balance of good and evil on the line‎, Constantine will use his skills to travel the country, find the supernatural terrors that threaten our world and send them back where they belong. After that, who knows... maybe there's hope for him and his soul after all.

Writer Daniel Cerone ("The Mentalist," "Dexter") serves as executive producer with David S. Goyer ("Man of Steel," "The Dark Knight Rises"). "Constantine" is produced from Bonanza Productions in association with Warner Bros. Television. The show is based upon characters published by DC Entertainment.

Anyone watch the 1st episode? What'd ya think?

I liked it well enough, but I think I'd set my hopes too high. We'll watch again though.

Definitely has potential! We'll be giving it a few episodes for sure.

Do you read the comics? I've seen the movie, but haven't read the GNs. So, I kept noticing differences between the show and the movie, which I'd imagine follows the GN closer.

I finally got around to watching the pilot. I haven't seen the movie, only bits and pieces. I liked the main character but I'm not really believing in his world. Not sure if I'll keep watching.

Yeah, hubby isn't too thrilled about it either. I figure we'll watch 1-2 more eps then decide whether we'll continue or not.