This section is much more interesting for me since it's almost entirely new information.

The reasons for the start of sheep husbandry and wool production were fascinating, as was the information on the challenges the early settlements faced. The Trekboers' early history was all news to me.

But so far, the best story is the discovery of diamonds and gold; I loved the tales of the wildcat mining days (what a great novel that would make).

The early history of De Beers was illuminating; in some ways I'm in sympathy with Rhodes' emphasis on life tenure for the governors as a way to insulate corporate management from the lure of short-term gains. We could do with a little more long-term thinking in American corporate culture which is structured in exactly the opposite way.

I found some great photos of the early days of mining in South Africa: http://www.miningartifacts.org/South-... and http://factsanddetails.com/world/cat5...

Kimberley Diamond Mining in the 1880s 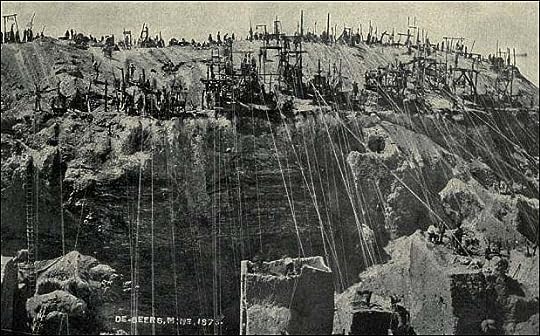 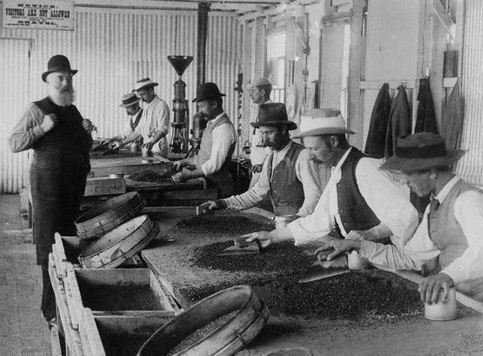 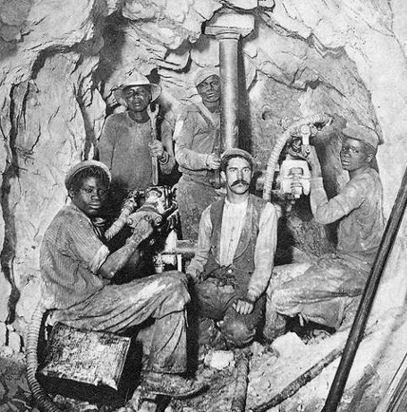 A very good fictional account of the Trekboers is The Covenant. My great great grandfather made the Trek as a young boy.

I took a foreign visitor for a walk in Joburg inner city on Sunday morning. The mining houses are clustered around a pedestrianised corner where there are old mining equipment (including an ox wagon like the ones used in theTrek) on display. There are also old photographs and short biographies of some of the more famous miners. Another interesting read from that era is Jock of the Bushveld which is a true story.

We currently have a major problem with illegal mining in the old abandoned mines. The miners are not using much more sophisticated technology than in the picture above to try to find any ore left behind. It creates very dangerous conditions and every once in a while they get trapped in the illegal mine shafts. It's a major operation to get them out since they know they'll probably get arrested (and deported if they are in the country illegally).

I remember reading and enjoying James A. Michener years ago. I'll definitely read The Covenant.

Its terrifying just thinking about those illegal mines.

I just finished this section and it was so deeply depressing. I'm glad to have read it, though, and some of Reader's insights are just amazing. The part about the devastation left in the wake of the rinderpest epidemic just blew my mind. And the way the conservationists misinterpreted the abandoned pasture-land thinking it was Africa's pristine state and 'declared that they should be preserved from human depredation for evermore. Most are now tsete-infested game parks...." Wow.

I thought some of you may be interested in this research paper on the South African mining magnates and WWI. Full disclosure it was written by my sister-in-law who is a historian specialising in the South Africa contribution to WWI especially in East Africa.

The best known of the group from my perspective is Percy FitzPatrick whose book Jock of the Bushveld is a South African classic. Some of you may enjoy it since it is based on a true story and his own experience as a transport driver on the god fields. His also assisted South Africa to purchase a portion of Delville Wood to commemorate its contribution to the battle. http://www.dailymaverick.co.za/articl...

Interesting paper on WW1. Thanks, Carolien.

Rinderpest! Seriously, I had never heard of this, what a devastating thing to happen.

Reader does an excellent job at showing how events connect, and the ramifications of this one thing over here on this larger thing over there. Cows dying = easier to take over a country = Africa forever changed.

Here I am at the end of part 6, only three months late. Now we are in southern Africa, where most of my own little time in Africa has been spent. I've read a lot about the Bushmen (Khoisan) -- mostly summaries of recent research -- but still I learned new things from Reader in this section, particularly the bits about their pastoral habits. The idea of them and the Bantu people moving frequently, occupying different parts of a vast area but only very sparsely, and how the Dutch and British were misled by seeing what they thought were settled people with great agricultural assets, made me think about all that beautiful, still uncultivated land in the Eastern Cape.

Labor shortages run right throughout this section, culminating in the opening of the diamond mines at Kimberly and the gold mines at Witswatersrand in the final chapter. It's a socioeconomic fact about Africa that I never appreciated before -- all those Europeans moving in wanted workers to do the heavy lifting, and getting workers was not at all easy. Unable to enslave the Bushmen, the Trekboers sought to exterminate them. Then there were the Xhosa, moving west as the Boers moved east. 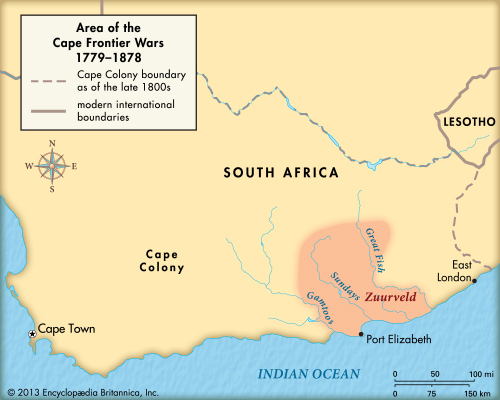 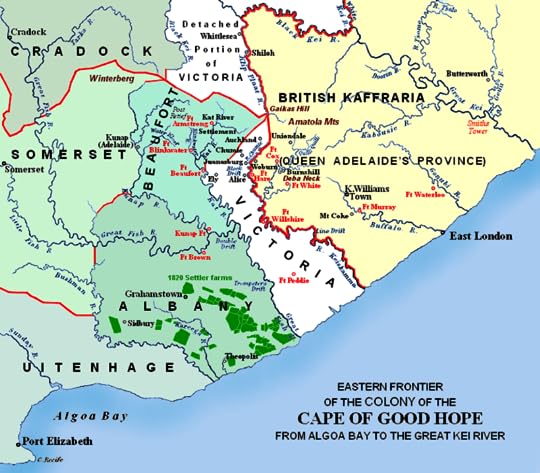 The section about the Zulus (chapters 42 and 43) and the Mfecane ("Scattering") was all new to me. People displaced in every direction put even more stress on a land that's just too unforgiving to support large populations. I liked how Reader discussed the role played by trade (with Europeans) in the conflicts and shifting power relations.

Many parts of this section made me sad, when I thought about all the people being forced off their land (not only by the Boers and the British but also by other Africans) and pretty much losing their whole way of life.

Mod
I'm quite jealous of everyone finishing this book on time! but i feel like the relative shortness of our next Big Read gives me a little grace period to wrap this up in January. I'm so glad that participants in this have enjoyed it and gotten something out of it! and seeing your posts always inspires me to get back to this book!

Marieke wrote: "I'm quite jealous of everyone finishing this book on time! ..."

Haha, Marieke, I am not finished yet! Still two sections to go. But I'm in no hurry.