Description (May put link to picture):

©Hawkfrost
Must Read ➣ (view spoiler)[I, Hawkfrost, have full copyright(©) on this template, and most of the copyright of this charrie. If you take this charrie and/or template, be ready to feel my wrath... (hide spoiler)]

{Clan: Just About to Join}
ThunderClan

{Personality}
Ella is extremely shy and sweet, though she doesn't trust any toms...she only trusts she-cats. She hasn't seen any other cats for two years and sometimes she wished she could die, but she would never hurt her littles ones. She is an amazing mother and she is completely heart broken becaues of the loss of three litters. She knows she has another litter, but she has not told Frozenheart, her mate. She never will. She is planning to escape while he would be gone to hunt. She needs a tom who is gentle with her and that always comforts her. The tom of her dreams would never never kill cats or hurt her...he would be loving and kind to every cat he sees. He would be the only cat who truly loved her. She doesn't know what love really is. She once thought 'love' meant that one day she would find a tom that would be her true love. 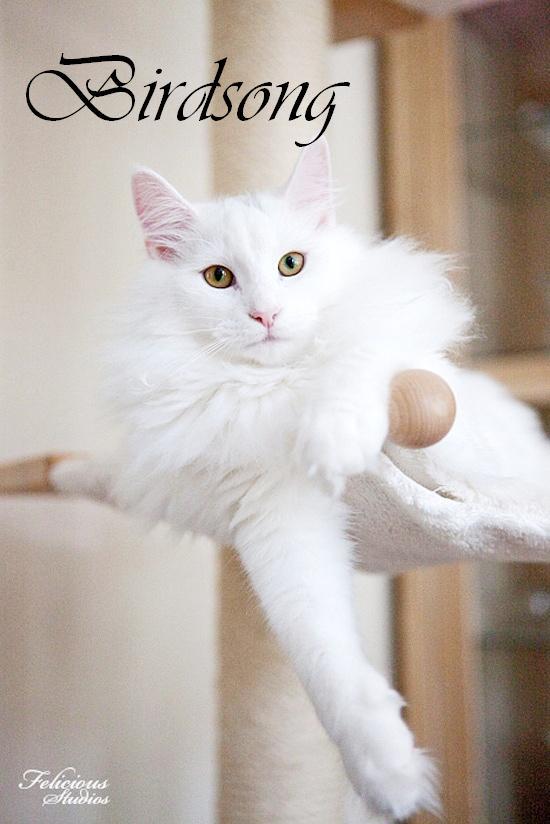 {Written Appearance}
Even though she's cover with scars and scratches, Ella is one of the most beautiful she-cats of any of the Clans. Weakened by abuse, she can't run but she can walk for only 3 hours a day. Her pelt is pure white and her eyes is a sparkling amber. She has long, matted fur that used to be soft and silky...though once she gets comfortable in her new home, clumps of the matted fur will fall off and her beauty shall be restored. Her voice is quiet(view spoiler)[Like Fluttershy; You MLP fans will understand this.] (hide spoiler)] and some of her scars are infected.

{History}
"Please, stop!" Ella whimpered as her mate, Frozenheart, was giving her a deep scar. "I've already lost two litters! Don't hurt me...I beg you, please!"
"Heh, you really think I care about kits?" Frozenheart laughed, but then sighed. "Fine, fine...I'll get you something to...take down the pain..." He smiled sweetly, but Ella wasn't an idiot. She knew he was going to do something to make the pain worse.

An hour later, Frozenheart came back with a few leaves. He dropped them at Ella's paws. "Eat them. It's Tansy...not too much, my Darling. And if you don't, you know what's coming,"
Ella's eyes widened and quickly ate some of the herbs. "Please don't hurt me..." She murmured.
"Just don't push it and you won't," Frozenheart growled and laid down in a dark area where only his eyes were visible.

A moon later Ella realize the Tansy her mate gave her, killed the kits growing inside her.
"How could you do this to me!?" Tears ran down her face.
"Like I told you before," Frozenheart couldn't stop laughing. "You really think I'd care about kits? They're just useless little brats!"
"You're a terrible father!" Ella wailed sadly. "I hope you die a slow, painful death! Then you'd understand what you put me and the other cats through!"

And four moons later, she realized she was expecting a fourth litter!
I can't tell him! I must run away...maybe find one of those Clans...they'll help me...

And now she has been searching for at least a quarter moon now.

{Weaknesses}
- Being treated like a princess (view spoiler)[It's the best way to catch her attention besides flirting. (hide spoiler)]
- Toms flirting with her
- Kits